With 438 votes the European Parliament approved the law which delete the subsides for bullfights.
This is a great victory, but these shows must be stopped!

The Treaty of Amsterdam, in force since 1st May 1999, lays out new ground rules for the actions of the European Union (EU) on animal welfare in a special “Protocol on the Protection and Welfare of Animals”. It recognises that animals are sentient beings and obliges the European Institutions to pay full regard to the welfare requirements of animals when formulating and implementing Community legislation.
The European Union is spending £30 million per year to support Spanish bullfights, which will kill at least 40,000 bulls this year. The EU is being urged by the Spanish government to recognise bullfighting as representative of Europe’s cultural heritage.

“The organisers of bullfights in Spain have told me that they love the EU because they now receive enough subsidies to kill 15 or 16 animals in a fiesta rather than the traditional one or two”, says Tony Moore of Fight Against Animal Cruelty in Europe, according to an article by the Daily Mail’s Danny Penman.

The EU is supporting the torturing to death of bulls in the bullring and countless other animals in village ‘blood fiestas’. We find it absolutely disgusting that a proportion of my tax goes to support animal abuse.

The bulls are intentionally debilitated with heavy sandbags dropped on their backs. A study conducted by scientists at Spain’s Salamanca University found that 20 percent of the bulls used for fighting are drugged before they step into the ring; in the sampling of 200 bulls, one in five had been given anti-inflammatory drugs, which mask injuries that could sap the animal’s strength (“One-Fifth of Spain’s Fighting Bulls Drugged?” Reuters, 28 Nov. 2000).

The bulls aren’t the only animals who suffer in the arena. The horses used in bullfights are blindfolded so that they don’t become frightened by the charging bull, and some are gored.
Barcelona recently declared itself “an anti-bullfighting city,” and 38 Catalan municipalities followed its lead; the last bullring in Barcelona closed in 2006 because of poor attendance (Fiona Govan, “Bullfighting’s Future in Doubt,” Telegraph 21 Dec. 2006).

It is estimated that the European parliament currently pays a subsidy of 220 euros per animal to breeders of fighting bulls, which – along with local subsidies in the bullfighting countries – is keeping the industry alive.

Opposition to bullfighting is mounting both in Spain and elsewhere. According to a Gallup survey in October 2006, 72 per cent of Spaniards show no interest in bullfights, up from 54 per cent in the ’80s.

Many aspects of the industry receive subsidies, including: bullfighting schools, bullfighting fan clubs, breeding and slaughtering of bullfighting bulls, purchase of bulls for popular fiestas, promotion and marketing schemes for bullfighting, payments by public television for the broadcasting rights of bullfights, pro-bullfighting museums and many more. All these subsidies take money away from serious social problems such as access to public health, education, infrastructures, the elderly, public safety, social housing and so on.

The exhibition “Tauromania – Between men and bull” was shown in the Yehudi Menuhin room of the European Parliament in Brussels. This photo exposition was run last June by the Spanish organisation “La Mesa del Toro” which includes 15 associations from 8 different sectors related to this topic in Spain. This exhibition was especially supported by the matadors Cesar Rincón, Enrique Ponce, El Juli and Sebastián Castella.
“La Mesa del Toro” promotes and defends the Spanish Bullfights as genuine cultural expression. Their goal is to support the continuation thanks to training, promotion and studies of this cultural tradition. Therefore they are looking for close cooperation with local authorities and EU institutions.

Jordi PORTABELLA, Councillor of Barcelona City Council (ES); commented on the claim that bullfighting is very popular in Spain, Saying that bullfighting is an activity which is not supported by the majority of the population and that bull breeders are heavily subsidised, higher than the actual costs to maintain their breed. The bullfight is an economical sector and on the large scale subsidised by the EU, the regional government and the regional Councils, on such a large scale that we talk about 2.5 Billion per annum.

Please write to EU Commissioner Mariann Fischer Boel today and ask her to put a halt to subsidies for this blood sport. 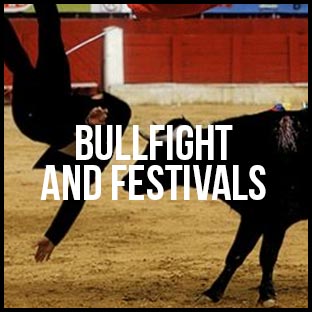