Jakarta – We all remember the shocking video posted on YouTube and shared through Facebook, and already viewed more than 1.5 million times, showing tourists of the Taman Safari park posing with a ‘drugged’ lion and taking snapshots while the poor animal fights, and is forced, to remain awake in order not to ruin the photos.
The lion, and all other doped animals of the zoo, were used to attract visitors, who have the possibility to take pictures with these lethargic animals, just by paying the equivalent of less than US$1,5.

Before the video was published, the Taman Safari Park had the credit of being a well-run animal conservation structure, and has won several national tourism and conservation awards. It is also part of a global governing body that offers animal care guidance and support to organisations around the world. Obviously, this use of animals, as things, is against every principle which take in consideration animal welfare, but in the meanwhile, the Taman Safari Bogor park insisted that it would be ‘unthinkable’ to sedate one of its animals, and so to risk its reputation. A spokesperson confirms the rules in force assure to the animals all the rest they require.
“Lion cubs sleep for more than 12 hours [a day]. The lion in the video wasn’t drugged, he was sleeping”

This statement leads us to think: “if the puppy has all the naptime needed, why did the lion handler in the video have to force the cub to hold his head up several times in the video? If sleep for a lion is so important, it would be better for the cub to sleep in his enclosure instead of being used for photos?”

We hope that more clearness will help discover how these parks and zoos are managed, anyway, to be sure this will happen, it is important to put pressure on Government, in order to secure this evident violation of animals’ rights will not be forgot.

ANIMALS MUST NOT BE DOPED TO BE USED FOR PHOTOS AND MUST NOT BE USED FOR ENTERTAINMENT: CLARIFY THE TAMAN SAFARI PARK SITUATION AND PUNISH THOSE RESPONSIBLE FOR THIS ABUSE. 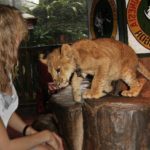 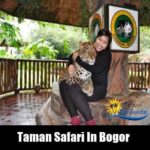 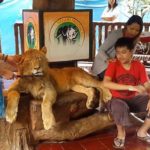 THE RESCUE AND NEUTER CENTE...

ABANDONED IN A CARDBOARD BO...

OIPA HAS SUCCESSFULLY BEEN ...

THE STORY OF AMIRA: BORN WI...

A LOST SOUL SWIMMING IN A F...

WESLEY WILL NOT BE ABLE TO ...

OVER HALF A BILLION ANIMALS...

IS YOUR DOG SMARTER THAT MI...

LOCKED IN A DARK GARAGE, EN...

OIPA TUNISIA, EVERY DAY A N...