In Nepal, on November 28 and 29, 500,000 animals are due to be brutally slaughter during the world’s largest religious sacrifice held every 5 years: the Gadhimai Festival.
Last time, it was celebrated on 2009 with sacrifice thousands of innocent animals including water buffalos, goats, chickens, pigs, rats, pigeons, snakes and many other species.

The mass sacrifice at Gadhimai Temple is said to be the cruellest form of animal slaughtering in public religious places. Millions of animals are hijacked in a ground with few peoples carrying blunt blades and chase them to slit and beheaded with several attempts leading slow and hard death. The Gadhimai Festival supposedly celebrates the Hindu Goddess of all living beings. Pleasing her is supposed to release the worshippers from sin, anger, desire and stupidity. It is shocking that a group of Nepali priests decided that the best way to worship Gadhimai is by slaughtering up to 500,000 animals in two days.

Eyewitnesses from the last festival describe that animals are transported in terrible conditions, often with no food or water for two to three days before the sacrifice, before being forced to witness the killing of others before they are slaughtered themselves, including the killing of mother animals in front of their offspring. They have the tendons on their legs cut to bring them to the ground and are then beheaded with knives. For many animals, it takes multiple attempts to remove the head completely.
The OIPA member league Nepal Animal Welfare and Research Center (NAWRC), with other national and international animal welfare organizations, animal welfare activists and lovers are working since years asking the Government of Nepal, involving Departments, organizer of Gadhimai Festival, National and International supporters of the festival to stop this terrific and world biggest un-human slaughter of millions of innocent and voiceless animals. NAWRC also registered a writ petition to Supreme Court of Nepal for doing the legal attempts to control the mass slaughtering of Animals in Gadhimai Mela. 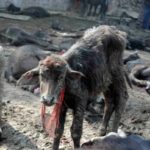 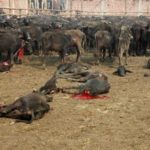 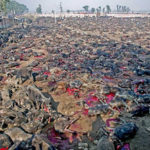