July 6, 2015 – Vietnamese Minister of Culture, Sports, and Tourism Hoang Tuan Anh has confirmed the elimination of brutal festivals in which animals are killed cruelly as a sacrifice to God.“As the Minister of Culture, Sports, and Tourism and a National Assembly deputy, I confirm that the barbaric animal sacrifice rituals in festivals, such as the pig slaughter festival in northern Bac Ninh Province or the buffalo killing fest in Phu Tho Province in the northeastern region, must definitely be terminated and disposed of,” the minister said at a conference on reviewing the festival management during the first six months of the year held in Hanoi early this month.

The festival took place in November, we hope that the Government will obey to what has been said.

“Bloody images of slaughtered pigs or buffaloes with heads being beaten to death are truly offensive and need to be removed,” he stated, adding that such images have met with strong criticism from the public.
“Though the killing scenes take place at some villages’ fests, the whole world has learned about them thanks to the Internet,” he added. “It’s the image of the country and our people, not just the villages anymore.”
He also expressed his resolve to end those festivals, saying that if those events keep being organized, it will prove the state management agencies’ impotence and indifference to public opinion.
In addition, amid implications that some places organize fests to get benefits from ticket sales, Minister Anh said those localities that allow organizers to hold ‘commercial festivals’ to make profit should be disciplined and the organization of the events would not be approved anymore.
However, according to festival representatives attending the conference, it is not easy to remove the animal sacrifice ritual part at the festivals.
Nguyen Dinh Loi, representative of the Nem Thuong village’s pig slaughter fest in Bac Ninh, said it is impossible to change the awareness of people, as well as the village’s elders, to stop the pig slaughter immediately.
Meanwhile, the representative of the buffalo fest in Phu Tho said his locality cannot put an end to the event, adding local residents will kill the animals in other ways instead of beating them on their heads to death like before.
Vu Xuan Thanh, chief inspector of the culture ministry, said the localities should sacrifice the animals more discreetly and subtly without leaving pain on them or offending society.
Also, Tran Huu Son, deputy head of the Association of Vietnamese Folklorists, said that the sacrifice part is indispensable so the point is how people do it.
“We couldn’t give administrative orders to ban the animal sacrifice at festivals since it’s not related to human life,” he said. “This is the villages’ customs so we should call on people to make changes instead of order them to stop.”
He proposed that the management of those festivals should be clearly divided so that the villages will be in charge of things related to their traditions and the government will manage issues like social security or food safety.

Last year OIPA launched a letter of protest addressed to Vietnamese authorities asking the final stop of Nem Thuon Festival:
http://www.oipa.org/international/2015/vietnam.html
This barbaric ritual consists in killing pigs through decapitation while animals are totally conscious, on the sixth day of the new lunar year, in front of villagers and children. After the decapitation, villagers use to daub banknotes on the pigs’ blood, in the belief this will bring good luck.
Over the last few years, both Vietnamese and foreign people are protesting against the cruel festival, thanks to the involvement of organization like Animal Asia. Last year, Vietnamese government expressed condemnation to traditional festival including barbaric and cruel rites, declaring that these kind of events damage the image of the country. Following pressures from all over the world, few days ago the local authorities of the province of Bac Ninh declaring that the festival will still take place, but in a discreet area and villagers will no longer daubing money in the pig’s blood.

THE PETITION IS CLOSED. 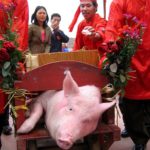 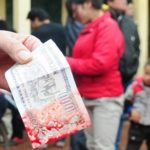 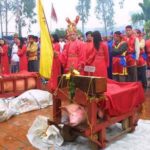 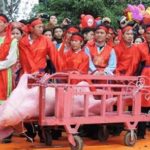 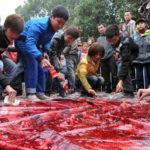 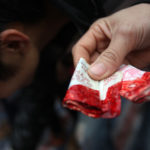 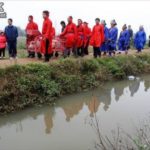 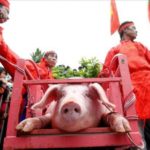 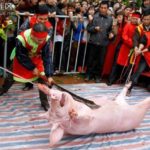 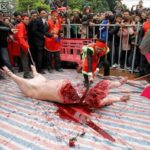