ATHENS – Justice for the Plaka cats – SIGN THE PETITION! 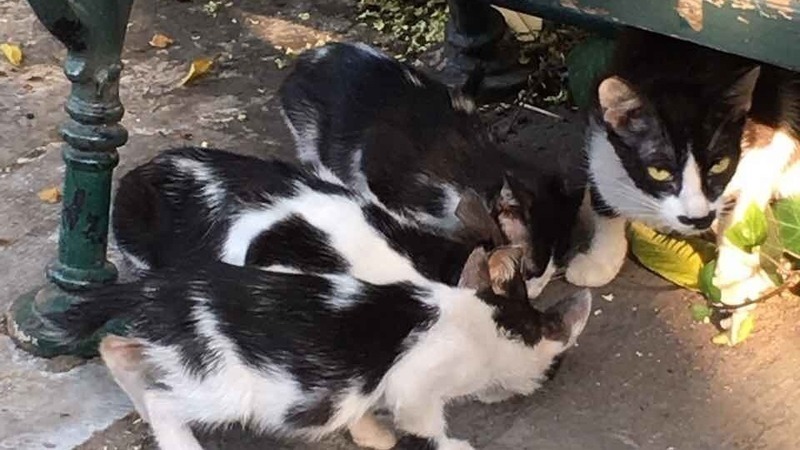 Petition to the Greek Chief of Police Konstantinos Tsouvalas, the Minister of Justice Stavros Kontonis, the Mayor of Athens George Kaminis, and all other relevant authorities.

Request by Nine Lives Greece for the prompt and full investigation of the mass poisoning of cats that took place at Plateia Filomousou Etaireias, Plaka, Athens on the 13th of July 2017. Six cats were poisoned and died as a result. The victims were two black adult male cats, a young mother cat and three of her kittens. One kitten escaped and is undergoing treatment.
On July 10, members of Nine Lives Greece had gone to Plateia Filomousou Etaireias and saw the family of black-and-white cats: a mother with four playful kittens enjoying the square and the care of several volunteers and indeed some of the square restaurant and cafe employees. The other two cats living in this square had already been neutered through Nine Lives, and the organisation had recently treated one for dental issues.

One of the restaurant owners complained that the kittens beg for food and annoy customers. Nine Lives presented a detailed plan that included regular feeding of the cats, discouraging tidbits from customers, and the spaying of the mother cat.

However, three days later food that resembles a dish served at the square’s tavernas was mixed with poison and left out for the cats to eat. This resulted in the cats dying in a painful and horrific way.

The bodies of the kittens were never found. The bodies of the two black neutered cats and the black-and-white mother cat, as well as the poisoned food, are now at a state lab for autopsy and analysis.

This is not the first time such a brutal crime has been committed in this same square. For a number of years cats have been killed there and no action has even been taken by the police.
Greek laws 4039/2012 and 4384/2016 set out harsh penalties – fines and/or prison sentences – for criminals who abuse or deliberately kill companion animals.
We ask you to sign this petition so that we can succeed in getting the police and local judicial authorities to launch an investigation. We can only hope that bringing the perpetrators to justice will act as a future deterrent and safeguard animal lives.