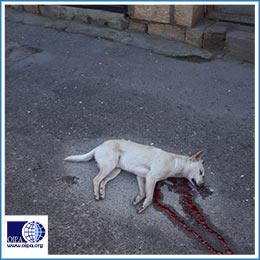 Today we received a desperate appeal from the animal rights community of Azerbaijan.

Dogs mass executions are daily committed across the country. OIPA sent a letter to the relevant authorities
of Azerbaijan demanding to put an end to the brutal extermination and clarifications
but we have received no answer to date.

We support Azerbaijani animal rights activists and share their witness and requests
towards the national institutions.

The world must know what happens to stray dogs and cats in Azerbaijan!

The appeal of the Azerbaijani animal protection community to the whole world:

The Azerbaijani authorities against the nature and the people of their state.

Appeal to the whole world.

Since the 1990s, Azerbaijani officials, at the level of mayors, municipalities, ministers,
have been conducting an unprecedented campaign to destroy the Nature of Azerbaijan.

Since the 1990s Azerbaijani officials have been conducting an
unprecedented campaign to destroy the Nature of Azerbaijan,
with the involvement of mayors, ministers, and the municipalities.

In spite of the requirement of the European Convention on the Protection of Pet Animals (Azerbaijan ratified it in 2007), which in article 12 asserts that only humane methods to regulate the number of homeless animals are allowed (‘in ways that do not cause imminent pain, suffering or mental anguish’), the authorities apply the most barbaric methods: they poison the poor animals, shoot them, slaughter them with shovels, burn them alive in furnaces, take them to camps infected with viruses, where the animals die without food, water and medical care. 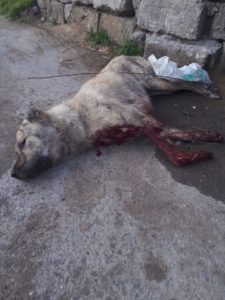 The dog reception camp situated in Balakhani, a suburb of the capital Baku and officially called ‘the Management of Cleanness and Sanitation of the Department of Housing and Communal Services of the Executive Authority of the City of Baku’, was turned nowadays into a death camp – for a long time it was associated with the Nazi camp Buchenwald by animal rights defenders.
In fact, there, violently caught dogs were shot dead and after the start of protests realized in front of the centre, the government chose a quieter method of killing: dogs were poisoned, and then the bodies were taken out and burned in the nearby plants.

The last May 2018, after years of filing several lawsuits against the mistreatments and repeated protests in front of the Balakhani Office, the authorities officially stopped the activities of the centre. The former employees have been dismissed and it was started the construction of a new centre for care for stray animals, the so-called ‘Toplan‘.
At that time, the country’s zoo protective community was inspired by these initiatives but since March 2019 the old policy of the authorities took up again. The centre ‘Toplan’, which previously looked like a beautiful postcard, restarted the violence. In the streets of the city, the authorities resumed shooting stray dogs. The institutions have never tried to investigate the brutalities and illegal conducts. The leadership of Toplan, in violation of the legislation on civil control and transparency, became something akin to a secret organization providing that no information can be obtained. Today, the employees are rude towards animal rights defenders and towards animals. 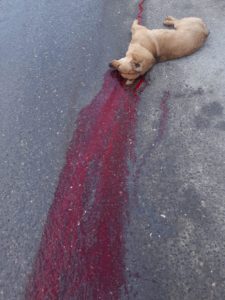 The Toplan’s territory is patrolled by an armed and seriously equipped police unit.
During the last peaceful protest action led by animal defenders in front of the Toplan Center on the 18th March 2019, the Toplan’s leadership and local police, consisting of several dozen employees, used violence, insults and provocations against citizens.
Nowadays, there is only one dog in the territory of the advertised centre. This is a reality which is far from the advertised postcard. Moreover, the fact that Toplan is located in Balakhani – on the territory of a recycling plant and the main city landfill leads us to understand which is the place reserved by the Azerbaijani officials to the situation of the stray animals of the society.

The initial Toplan’s aim was directed to offer neuter/spay, vaccination treatments to stray animals and in addition, it covered their reintroduction practices into their habitats. It included also a public sensibilization campaign, having the Azerbaijani public often in a negative stance towards those animals and wanting their killing by authorities. In this context, stray dogs are trapped in a brutal way and after being brought to Toplan, they often disappear as they are being killed usually during the night by gunshots. Moreover, Toplan actually promotes cruelty on their facebook pages and instagram, and exposes ordered materials against stray dogs resulting in cruel massacres.

Here below can be found the links of the mistreatment’s video uploaded on youtube.
https://www.youtube.com/watch?fbclid=IwAR1_I9fT8pD3rxFeOUeaZqejFADCtM9pjca7Yc7xSLFIQ6Pp-3sZ1wVjoXY&feature=share&v=LJ1-XbsZS2w&app=desktop

In the video the man confesses to having paid around 100 azn (50 euro per each dog 5 azn/euro 2,5) to the Shelter created by Leyla Aliyeva, the daughter of President of Azerbaijan and Vice President of Heydar Aliyev Foundation, to get the stray dogs shot dead during the night. 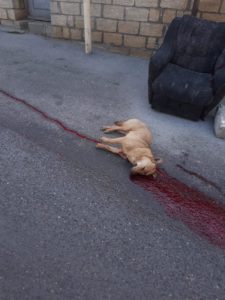 Violence occurs around all the Azerbaijani cities but it can be asserted that the animal mistreatment problems are particularly serious in Baku, Sumgayit, Ganja, Sheki, Khirdalan, Naftalan, Lerik, Lankaran, Khachmaz, and Quba, Tovuz, Yevlax.
The Executive Power Heads are ordered to get them shot dead without caring for the Signed Convention.
They are cynically destroying the nature and killing the stray animals of the country with the orders from the mayor of Baku Eldar Azizov and the mayor of Sumgait Zakir Farajov.

The barbaric methods used by Toplan employees to capture the dogs consisted of huddling them into the cars with shovels, nets, using a fishing line with hooks and baits. These crude activities cause animal injuries such as fractures, broken jaws and eyes, and the torsion of several parts of the animals. These situations are shocking ordinary people, who often record them on videos and photos to be sent to different volunteer groups. The most painful fact is that even the sterilized and vaccinated dogs are being killed.
It is evident that the work that should be carried out by the authorities in order to follow the rules established by the European Convention for the Protection of Pet Animal is indeed enacted by the volunteers, who tap into their own finances. They are fighting against the authorities who, even though are in charge of defending the animals, kill them. In fact, ironically, the police officers taking part in the night animal shootings, in the morning receive the allegations coming from the animal defenders right against them.

It is important here to highlight that the violence conducted by the municipalities against the animals and their destruction of the Azerbaijani natural environment receives tacit support from the country’s leadership because the executive branch of power protects the Azerbaijani authority.
The activists and zoo-defenders are under constant threat, pressure, provocations, and attacks by the local authorities for their action to demand the authorities to comply with the Azerbaijani legislation and fulfil the international agreement’s obligations, which are the European Convention for the Protection of Pet Animals in 2007 and the Administrative Offences Code article 274 of Azerbaijan Republic. 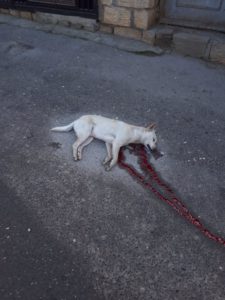 For many years, zoo-defenders have proposed concrete steps to solve the stray animals’ problems, like the following ones:

-Facilitating the constant access of animal rights defenders and journalists to the territory of all structures involved in taking care the stray animals ‒ that is, public control of the activities of these state institutions, important for animal welfare.

-If the state institution does not provide enough funding, the zoo-defenders are ready to buy all the food, medicine, and to build enclosures and kennels on these territories.

– Actually, the dream of all zoo defenders is just the transfer (due to the speedway, proximity to the landfill full of diseases, and because of the territory of the centre Toplan has been contaminated and re-contaminated several times with all possible dog diseases), and ideally closing of this camp and transfer of all animals to other state shelters.

-Toughening of punishment for the irresponsible ownership, throwing the ‘boring toy’ on the street (it is verified that an increase in the number of homeless animals is observed in autumn, when the owners of summer houses returning to the city, dump animals to the street).

-Introduction of a strict accounting system (including compulsory chipping) of pets.

-Legally enforce the requirement for pet owners to conduct operations to sterilize their pets in case they do not have breeding value and the operation does not threaten their lives.

-Close all illegal animal sales points, introduce a tight control by theVeterinary Department and the animal protection community of the sales points activities. 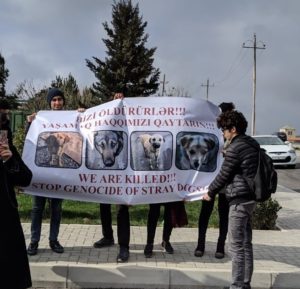 However, the authorities do not fulfil any of these points. That is why we ask the world to help us!

Help us and yourself!

The nature of Azerbaijan is not the property of the corrupt authorities of Azerbaijan, officials of crime, various mafia families who, thanks to the force of the police, special services, and prosecutors, keep the country under control.

We ask the world to help the civil society of Azerbaijan to
exert diplomatic pressure, up to the imposition of sanctions against the Azerbaijani authorities, until they really fulfil Azerbaijan’s legislation and the country’s international obligations as well as punish those responsible for destroying the Azerbaijani Nature and animal world.

The whole Earth is our Home.

The whole Earth is your home.

The whole Earth is my home. 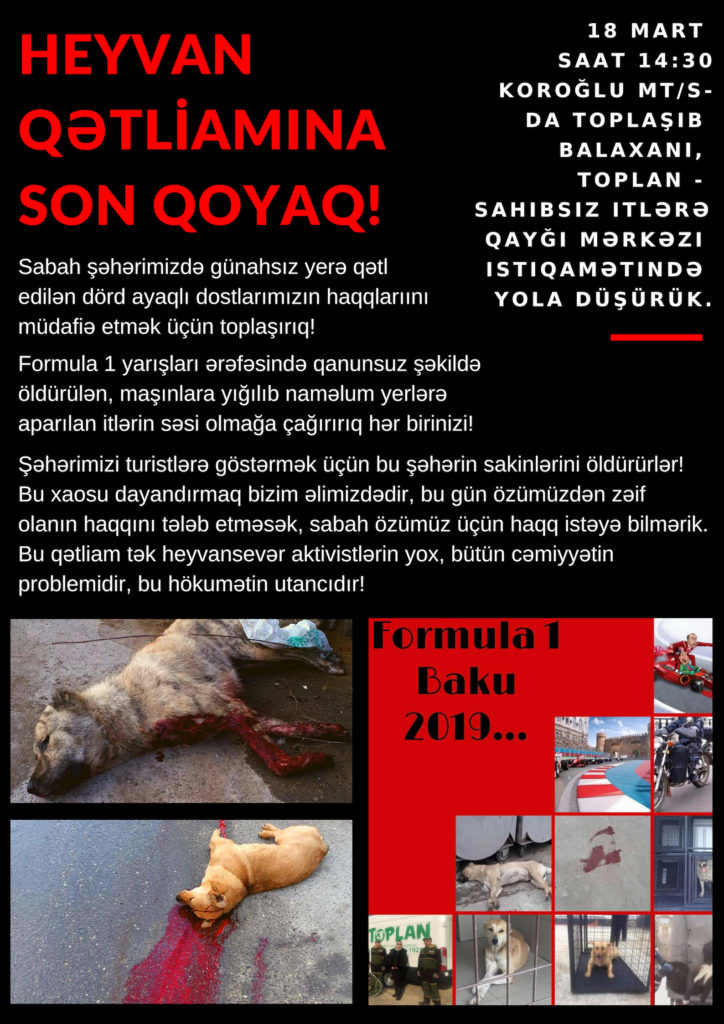 ‘For hundreds of thousands of years, stew in a pot gave rise to hatred and indignation. It is hard to stop. If you want to know the cause of disasters and wars in the world, just listen to the mournful shouts of the midnight slaughter.’ (A poem of a Chinese monk).