After months of appeals and campaining, the bear trapped in a cage in the restaurant Kodra e Kuajve in Durres, is disappeared as you can see from the empty cage.

Balu (known as well as Poku) was a 4 years old bear, male. He was sold from a poacher to the owner of the restaurant and now, after months of actions he’s been moved.

It is the sad destiny of many bears in captivity. When the media pressure become to high the bears often disappear.

It’s essential to keep high the international pressure on the restaurant and on the Government, OIPA will keep searching for Balu.

OIPA will keep asking to the owner of the restaurant what is happened to the animal. 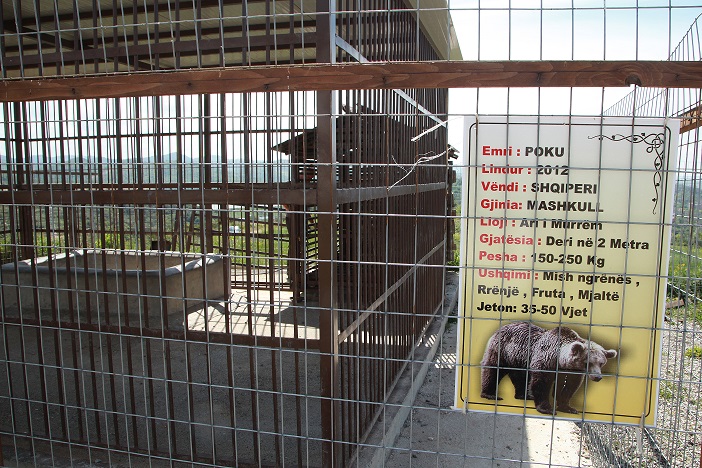 After months the situation of Balu is not changed. The owner of the restaurant doesn’t recognize that the bear is in danger.

The animal has never been visited by a Vet and he is fed with sweets and other improper food gave by the tourist. His psychic and physics health conditions should be checked and he needs proper food.

Even a little improvement of the cage of the bear would be good for his wellness.

After the segnalation of a tourist travelling in Albany we discovered that the restaurant Kodra e Kuajve, in Durres (Albany), is using a bear as tourist attraction.

Our volunteers did then a little investigation to find out how was the animal and as you can see in our previous article the bear  shows clear signs of discomfort. Read more here: https://www.oipa.org/international/balu-bear-albania-oipa/

We tried to get in touch with the owner of the restaurant and find a way to dialogue with him in order to improve the conditions of the animal and then move the bear to a sanctuary, but since it was not possible to start a dialogue we decided to take action and start an appeal.

The restaurant is infact registered on trip advisor and there are several pictures showing the bear trapped.

OIPA International CALL TO ACTION: help Balu, the bear abused and trapped in the restaurant.

“Hereby to express my deepest indignation for the mistreatment to which Balu is condemned to live. Bears are wonderful animals, and they need to live freely. Confine them in little cages to be shown to clients is an horrific and irresponsible behaviour, that does not consider the importance of this endangered animals’ lives. Due to the fact that bears in Albania are legally protected species, I hope an investigation will be started, to punish the responsible, if he does not immediately release the bear. Personally, I will not eat in that restaurant, and I will ask all my acquaintances to do the same, until this situation will be solved.”

SEND A LETTER OF PROTEST!