OIPA CAMEROON EXPERIENCED A SAD DAY DURING ITS VACCINATION CAMPAIGN IN THE BAFUT VILLAGE. 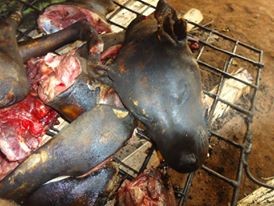 For the past fifteen days, OIPA Cameroon has been treating stray animals in the Bafut  village in the North West region of Cameroon. During this period, over 200 dogs and cats have benefited from this initiative, however Wednesday, 29th June 2016, has been a very sad day as we discovered a black market of dog meat. This trade has been going on for many years since none stood up to fight against it, to protect these animals, nor educate the community on the impact of dog meat on human health and on the animals.

This shocking picture shows exactly how the animals are prepared for consumption.  Anyhow, four dogs were recused from the hands of the perpetrators of this horrible crime by OIPA team. Taking any picture was prohibited until a hidden camera caught   an image. The restaurant owners refused to take photos, nor talk to OIPA. A consumer  has asserted that, over 10 dog are killed every week and dog meat is popularly known as “johnny four foot”.

While our team is hoping to launch a campaign against dog meat, we are also seeking  international support so that the Government of Cameroon put a ban the dog meat in  our country.

The majority of the dogs killed for this inhuman trade, are stray dogs: animals with no previous medical check up which can confirm their health wellbeing, and so exposing human health to different, but equally dangerous, risks.