Another campaign to end greyhound racing is calling.

A petition set up by the association Hope Rescue aims to ban definitely dog racing in Wales.

There is just one dog track remaining in the country. It’s the Valley Greyhounds, an independent facility in Ystrad Mynach where dogs race once a week, but considering data collected only the last three years, local animal rescue associations took over 200 greyhounds from this track, 40 of which affected by serious injuries.

There are now plans for the Ystrad Mynach track to become part of the official British racing system so, rather than closing the facility aware of the psychological and physical negative effects that racing have on dogs, greyhounds will be supposed to compete four times a week, leading them more suffering by further expanding this cruel sport.

A step behind for animal rights and protection. Greyhound racing is already banned in 41 U.S. states and Argentina. It’s time for Wales to take the lead in the U.K. and do the same.

Last month, even the leader of the Welsh Liberal Democrats Mrs. Jane Dodds called for a ban on dog racing and Member of Parliament Alex Davies-Jones joined her. Mark Antoniw, Counsel General for Wales, followed them by issuing his own statement in support of the greyhounds, “Every year, hundreds of hounds suffer injury, mutilation and death as a result of being forced to race, with many being “put down” because of the high cost of medical treatment.”

(anyone can sign, even if you are outside of Wales)

The goal is to reach 68,000 signatures and make this the most popular petition in Welsh history! 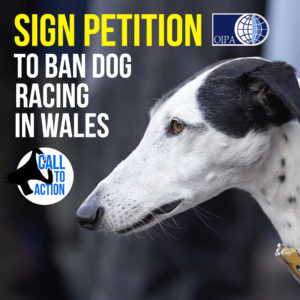