BANDUNG ZOO, INDONESIA – OIPA ASKS TO THE GOVERNMENT to enforce its own standards for zoo licencing – SIGN THE PETITION!

Recent videos taken at the Bandung Zoo by the activists show two sun bears looking skeletal and begging for food.

It is the latest accusation against the controversial attraction – it was previously criticised for mistreating an elephant which later died.

But a zoo official has denied the claims, saying that the bears are sufficiently fed and are healthy. 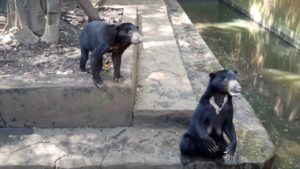 Indonesia’s zoos are notorious for their inadequate conditions, with most scoring poorly against government-set standards.

Their videos, taken since mid-2016, show the bears pacing around in a concrete enclosure and standing up on their legs apparently begging visitors for food, who throw them junk food.

One clip also shows a bear defecating and immediately eating its own faeces. Ms Fredriksson, who is co-chair of the sun bear expert committee, told the BBC that a sun bear eating faeces may be exhibiting “extreme boredom”.

The enclosure is dirty, the water is polluted and unclean, and the floor has no grass. There are no live trees in the enclosure. 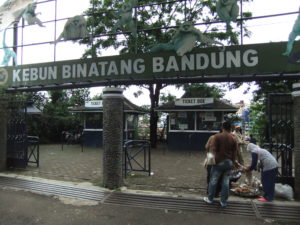 “The fact that you can see their ribs, that is certainly not normal. They are underfed,” said Gabriella Fredriksson from the International Union for Conservation of Nature.

“Sun bears are very active animals. If they are stuck in a concrete pit with nothing to do, no stimulation for climbing and digging, it’s soul destroying to say the least,” she said.

The concrete floors would also damage their soft feet, while the lack of shade may cause cataracts in sun bears which are used to living in dimmer environments.

Mr Gea said that the other animals in the zoo also appeared to be in poor condition. Other videos show deer with skin conditions, and chained-up elephants.

Reviews on travel rating website Tripadvisor of the zoo have been universally critical, with many saying the animals appeared neglected and in distress.

“A horrible place, hell on Earth for all these poor animals. Rusty cages, dirty place and really neglected animals,” wrote one reviewer.

But Bandung Zoo spokesman Sudaryo dismissed the issue as an “old case”. He told BBC Indonesian that they feed the bears regularly and also conduct regular health checks. 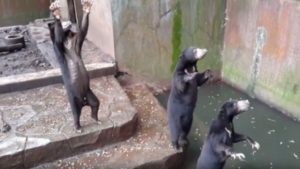 “We provide enough food… People say they are thin, but does (that) mean they are not healthy and they are not eating? It’s not,” he said.

He added that the bears were begging “because there are people who throw food at them”, and that the zoo has told visitors to stop this practice.

The zoo last made the news in May 2016 after activists highlighted the plight of Yani, an elephant that died from an unknown disease. The zoo was said to have failed to give adequate medical care.

Bandung’s mayor, Ridwan Kamil, told reporters last year that he had no power to shut down the zoo as it was privately run.

A Jakarta Globe report in 2015 said that out of the 58 registered zoos in Indonesia, only 4 were found to be “decent and appropriate”.

The controversy over Bandung Zoo follows that of the zoo in Surabaya, dubbed by some the “zoo of death” after several animal deaths in recent years. 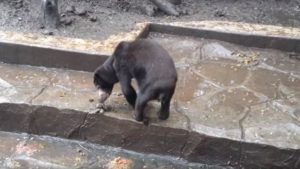 Local activists have campaigned tirelessly to address the situation in zoos, and there are now at least laws and standards in place since 2012. However, the problem is lack of enforcement from the authorities. Privately run zoos tend to “buy” their permits by bribing officials. They bypass any formal process of audit or assessment to minimum criteria as laid out in the law. Protests to the government about welfare of wildlife in zoos tend to fall on deaf ears.

Plus, let us face it, as long as the general public keep buying entrance tickets they have little incentive to change. Zoos in Indonesia are mostly places of recreation and entertainment – nothing to do with conservation or education.

The lack of animal welfare is a serious issue, out of 58 “registered” zoos in an Indonesian government survey in 2015, 54 of them were “below minimum standards” – over 90% of zoos are sub-standard according to Indonesia’s own standards!

We are not just talking about Surabaya Zoo or Bandung Zoo, and that still does not count for the many still illegal and unregistered zoos. Even worse, is the fact that many of the animals are sourced illegally too, in some cases “sold” illegally by wildlife officials and in some cases poached-to-order from the wild through a network of blackmarket wildlife traders.

Another significant problem, not to be under-stated, is the general “availability” of wildlife for zoos, as the volume in the illegal wildlifetrade is proportionally linked to the wide-scale deforestation for global demand in timber, pulp & paper and palm oil (Read more HERE). Species are captured for trade as their habitat is being bulldozed at an alarming rate. The global economy is consuming the rainforests in developing nations, especially Brazil and Indonesia, who have the largest biodiversity in the world and hence so many endangered species on the brink of extinction because of it.

In the end, our own personal consumption habits play a large role in facilitating the situation for Indonesia’s wildlife and forcing a large amount of it into zoos. Fore example, the cosmetics, toiletries, processed foods and even meat (as Indonesian palmoil and Brazilian soybeans are used in livestock feed in intensive farms) that we consume have a long ecological shadow (Read more HERE).

Please add your voice to OIPA petition asking to the Indonesian Government to enforce its own standards for zoo licencing.

Let us keep the pressure on and in the meantime make sure our own lifestyles are not contributing to the problem, READ MORE HERE

The petition will be send to the Minister of Environent and Forestry, Menteri Lingkungan Hidup dan Kehutanan.

BANDUNG ZOO, INDONESIA - OIPA ASKS TO THE GOVERNMENT to enforce its own standards for zoo licencing - SIGN THE PETITION!