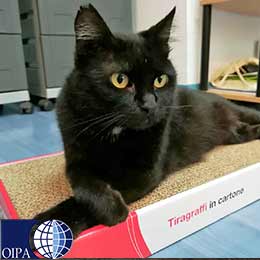 Despite the stigma surrounding them, black cats are friendly, affectionate animals who certainly do not deserve the negative reputation of being bad luck they have been suffered for many centuries, and are still object of in many countries. And yet, no matter how you  feel about them, we must appreciate that people have also been fascinated by black cats, they have always been associated with special powers as well as  with magic, whether good or bad. But, why?

Despite  the fact that they are not easily adopted and the first to be abandoned by people or euthanized in shelters,[1] due to their bad reputation, black cats  thrive  and are widely spread, especially in urban areas. In Italy alone some report the presence of at least 2,000,000[2]. Apparently  this depends on the fact that they are not very dominant, they  hardly get involved in fights for mating, but rather wait patiently for their opportunity to mate; after all they have adopted the winning reproductive strategy![3]

But black cats are not always associated with bad luck, neither have they in the past.

In ancient Egypt, cats were worshipped to the point that killing a cat  was considered a crime. The goddess Bastet was depicted with the body of a woman and the head of a cat. She had a temple  in Bubastis ( “the city of Bastet”) and her cult was associated with  Isis, goddess of magic and the afterworld. Black cats, invisible at night and stealthy as shadows, would perfectly match these features. Cat worship eventually declined in Egypt in 390 AD following the banning of the cult of Bastet, but they were still kept as pets and used for pest control.

So, how did black cats fell from being worshipped to being feared and hated? And why still nowadays is this stupid superstition (as all superstitions are, by the way) still attached to innocent black cats?

Black cats began being persecuted in the Middle Ages, when the Christian church strived by any means to eradicate pagan cults and superstitions contrary to the new religion, leveraging against the ignorance of people.

The first document that officially confirms black cats as an the incarnation of Satan, and that triggered a merciless hunt, is no less than a papal bull.

In fact, around  1233 Pope Gregory IX issued the bull  “Vox in Rama audita est“, where he mentioned the black cat as an animal worshipped by some heretic sects, describing in detail the satanic rite:

“…  from a statue which is usually present during these meetings, a black cat, the size of a small dog, descends walking backwards, his tail up-right, and the novice first kisses the cat’s anus, then the master  and last in an orderly fashion all the others who are worthy and perfect. The non  perfect, and those who feel they are not worthy receive a word from the master and, resume each their position, chanting litanies and bowing to the cat, while the master  invokes: ˵Save us!˵”[4]

Then, in 1484, Pope Innocent VIII issued another important bull, the “Summis desiderantes,” which would start a real witch hunt, and for women looking after a black cat would be enough evidence for being accused of witchcraft. Three years later, in 1487, the same pope confirmed Tomas de Torquemada as Grand Inquisitor of Spain, and issued another bull: the “Malleus Malificarum[5]” a sort of manual for witch-hunt. In the bull were listed all features that would help identify a witch, not last the association with black cats: thus a lot of innocent people, mostly women[6], and animals  were tortured and killed, black cats merely for sporting the wrong fur colour!

But, how can we explain such implacable hatred for (and fear of) cats, especially black ones?

Cats are very cautious and quite animals, they can move in the dark and, especially if black, can materialize out of nowhere. Their magnetic and outsized eyes, the way they glow in the dark and their ability to narrow their pupils to a slit in full light can be disturbing. Especially the glow in the dark made people believe they were possessed, but we know that this depends on the presence of the “tapetum lucidum” in the retina, a special layer of cells whose function is to reflect the light that has not stimulated the retina bouncing back into the receptor cells for a second chance of absorption by the visual pigments, thus enhancing night vision[7]. Cats ability to orient in darkness is also enhanced by their fine hearing  and sensitivity of the vibrissae.

Besides ignorance, rigid morals and bigotry of the times condemned feline mating rituals; so, noisy, aggressive and promiscuous sexual behaviour was seen as sinful and as conclusive proof of them being the embodiment of Satan.

Let’s not forget that generally black colour has always been associated with darkness, infernal demons, the world of the occult and dark forces.

So, superstitions thrived. According to one, it was enough to bury or brick a cat (no matter what colour) up alive beneath the house door to guarantee the solidity of the building. (Many cats were bricked up alive beneath the Christ Church in Oxford or the Tower of London). And, from facts to legends, myths about black cats are various and abundant.

Their appreciation in ancient Rome is a bit controversial, many believe they were also considered good luck, and when one died it was cremated and its ashes were scattered across the fields to control weeds and bring good harvests; but according to  other sources[8], black cats were considered endowed with satanic power due  to the fact that they would come out of nowhere at night and freeze in front of a carriage lamp, as a consequence the drawing horses scared by the light in their eyes would freeze and rear up, thus causing accidents.

According to another legend, it seems that Ottoman pirates, who were Muslims (and we know how much Mohammed loved cats), kept some black cats onboard their ships, again to chase mice from the galley. Often the ships moored at night near a town, waiting for daylight to ransack them, but the cats, restless and curious animals, would jump off the boat and roam the streets before dawn. When one of these cats was sighted at night this would be immediately  associated with the arrival of the pirates and the city would be alarmed. It apparently is from this that cats are seen as a bad omen.

To counterbalance, at least a little bit, their bad reputation, let’s mention a few examples in time and places where they were loved and sought after.

In Cornwall and Wales it is still commonly believed that black cats bring good luck to unmarried women and will help them find a good husband.

Unfortunately though, even nowadays, ignorance and mere cruelty towards animals make life hard for poor black cats. Every year many black cats are killed and tortured mercilessly, with negative highs during Halloween. In order to promote appreciation for these undeservedly mistreated animals and make people aware of how their lives are often at risk, many countries have established the Black Cat Day. During this day many associations promote adoption of black cats, and create events to make people love black cats. The first to start this celebration were some Anglo-Saxon countries, traditionally great cat lovers, but now also in Italy, for instance, we have the Gatto Nero Day every year on November 17[10].

And yet, there is always the possibility to exorcise fear of black cats, like what Ypres inhabitants in Belgium, do every year. They celebrate a Festival of Cats, or “Kattenstoet,” a tradition  coming from the middle ages, when witches were burned at the stakes and their cats thrown from the belfry. Nowadays the whole business is acted in a symbolic way, where plush cats are thrown from the tower while spectators  try to catch them, and the climax is when the witches and their cats are burned on a huge stake!

Cats, whether  black or any other colour, are wonderful animals and,  as the proverb goes:

“Cats are like music; it is useless to explain their value to those who do not appreciate them.”

[5] In English “The hammer of witches”

[6] …The Malleus was used as a judicial case-book for the detection and persecution of witches, specifying rules of evidence and the canonical procedures by which suspected witches were tortured and put to death. Thousands of people (primarily women) were judically murdered as a result of the procedures described in this book, for no reason than a strange birthmark, living alone, mental illness, cultivation of medicinal herbs, or simply because they were falsely accused.. http://www.sacred-texts.com/pag/mm/

[10] The choice of this date is not fortuitous, as November is the month dedicated to remembering the dead, in Italy number 17 is considered unlucky….

Samira Coccon is a Rome based cat behaviourist. She specialized in Feline Behaviour and Psychology in the UK. She can be contacted at: samiragatti@tiscali.it