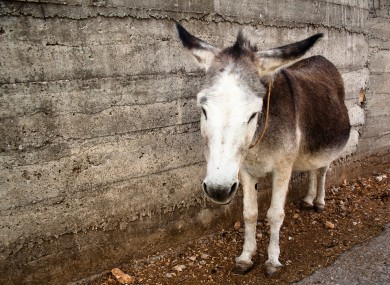 OUAGADOUGOU, Burkina Faso — In the small Burkina Faso village of Balole, where farmers struggle to grow tomatoes, cabbages and eggplants, angry youngsters armed with batons and machetes are barring entry to the slaughterhouse.
A sickening stench from dozens of rotting donkey carcasses hangs in the air.
This is the flipside of Burkina’s booming trade with Asia in donkey meat and donkey hides.
Fed up with the foul smell and pollution blamed on the slaughter, dozens of villagers earlier this month ransacked the abattoir and have blocked its entrance ever since.
Eating donkey meat is nothing new in parts of the west African country, where some believe the flesh has medicinal virtues and can even cure measles.
But the export of donkey meat and hides, notably to China and Vietnam, has flourished beyond measure in recent years, triggering some controversy.
“More than 45,000 donkeys have been slaughtered in less than six months” out of an estimated total of 1.5 million, says government spokesman Remi Fulgance Dandjinou.
“The subject has come up twice in cabinet meetings and the ministry of animal resources has been told to find ways of regulating the slaughter.”
Burkina’s customs service, quoted by the Sidwaya daily paper, said 19 tons of donkey hides had been flown to Hong Kong alone between October 2015 and January 2016.
Rising demand for hides has driven prices up drastically, from a mere 2,000 CFA francs (three euros) a piece to between 30,000 and 50,000 CFA francs (40 to 76 euros).

This massive slaughter of donkeys involves less controls on slaughter techniques and animal welfare conditions, especially in the rural areas. Therefore OIPA asks to the Burkinabe Government to take action and check over this situation.