A dynamic fragment of the OIPA Cameroon’s assignment is to use education as a tool to raise awareness on animal issues amongst children especially from the early ages. The lessons/ talks given in primary schools handle a wide range of topics including: the humane treatment of animals and how to consider animals sentient beings; the education of relative stakeholders on the basic care for pets, pet diseases, pet behaviour and their needs; an appreciation of the role animals play in human live; and the contribution of each member of a given community to realize his or her influence on the welfare of animals. 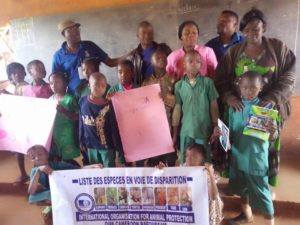 Given that animals are numerous in our communities, it is vital to eradicate unawareness and folklores about animals as well as promulgate and persuade people into caring and compassionate peers within the human-animal relationship regardless of each having their own kind of personality. Furthermore, this will provide an understanding of the psychosocial impacts of human-animal relationships and how these benefits can improve both human and animal health around the world.

Having in mind that the kids of today will be in charge of the animals tomorrow, OIPA Cameroon thanks to its passionate volunteers provides a variety of programs, as earlier mentioned to individuals, the community, and school groups, to ensure that values of respect, admiration and compassion for life are nurtured. Recently, OIPA Cameroon, in collaboration with the government,  have taken action over 12 Government primary schools in the West region precisely 2 schools in each area of the Bameka community i.e. Sangmete, Ngouang, Nket, Meffeng, Bapeng and Dang to conduct an education outreach program on animal welfare and environmental protection. In addition, 2 Government Bilingual Primary Schools at Djut- Bameka and Bamendjou were also visited in the same occasion making a total of 14 primary schools visited. This was made possible prior to resolutions adopted from the preparatory meetings held on the 19th April, 2019 with the main aim to elaborate a plan to host national/ international volunteers by the end of the month of May 2019. 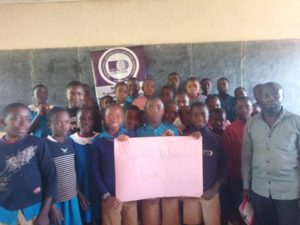 The educational outreach program was scheduled to run from the 28th April to the 12th May 2019.

During the first three days national and international volunteers were taken to Bafoussam OIPA office then to Bameka where they were all lodged. Furthermore,  the preparation of teaching resources including: pictures/ charts of familiar animals, (donkey, dog, cow, fish, insect, bird, etc.); a set of “feelings cards” each carrying a single word linked to a feeling/emotion; questionnaires in both English and French were distributed to assess the pupils knowledge of animal welfare before and after the training session; charts which carried the lessons to be taught and others with key messages on animal welfare; give-aways (exercise books, pens, pencils, erasers, etc.); plain charts for pupils to carryout given classroom exercises (drawing, quiz, etc.). Lessons were designed to be interactive and established in juxtaposition with the SPANA teaching guide then imparted by trained volunteers and animal welfare professionals. 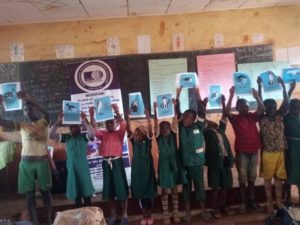 With an authorization from the Inspectorate of education for the region, OIPA Cameroon educated up to 87 pupils per school, aged between 6 and 15 years old within the respective quarters. Ten questionnaires per session were distributed to very active pupils to evaluate their knowledge on animal welfare before and after the training. To ensure sustainable change, strengthen awareness and knowledge on animal welfare issues, ‘Animal welfare clubs’ were created in the visited primary schools. The club comprised of 10-15 members with a leader and an assistant. The class teacher was mandated the duty to guide club members through their activities which includes the creation of poems, sketches, debates, songs, drawings, etc. in relation to animals and the environment and present in front of the entire school with the permission of the head teacher. An exercise book was also handed to the teacher to keep record of the pupils’ accomplishments. More so, an inter club competition from the different schools will also ensure the momentum for change to be maintained.

Before, during and after the animal welfare and humane education in public primary schools for a duration of 05 days, a mobile sensitization team was put in place to enlighten pet/ animal owners within the community on the importance of adhering to the “five freedoms” of animals, spaying and neutering household pets (dogs and cats) to decrease stray population, and in essence promote respect and kindness to all living creatures because we all deserve compassion as members of any given community. A total of 27 animal owners including dogs, cats, goats, pigs and sheep owners were sensitized. Focus group talks were carried out in the market places and junctions targeting, as many audience as possible. These talks were directed to adults, especially animal owners, encouraging them to consider these three categories of animals (domestic, wild and working animals) as well as dissuade them from all forms of animal cruelty especially killing animals for meat. Reactions from these locals were diverse and were mainly associated to illiteracy, poverty and cultural beliefs. 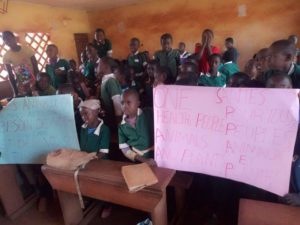 To put into practice the lessons taught in the classrooms and on the field, a free treatment and vaccination program for pets was introduced at the end of the program as a symbol of the education just received. The goal was to treat, spay and neuter over 50 pets (15 cats and 35 dogs) and 20 stray pets within the Bameka community as well as demonstrate to the community the paybacks of enhanced animal health and welfare. A total of 31 pets (7 cats, 21 dogs and 3 stray dogs) were treated.  It was observed that most of the dogs were malnourished and had wounds on their skin (belly, feet and around their ears). Most of them are hardly vaccinated against diseases such as parvovirus, distemper and rabies for dogs and against feline enteritis for cats. Common diseases like round worm, tape worms, fleas and ticks affected most pets thus an indication of poor care for pets within the community. It was also clear that most dogs had been beaten, ill-treated and left by themselves to look for their own food.

Below is a more detailed, daily report of the activities that have been carried out from 28th April to the 12th May.

-Lodging followed in the Bameka community.

-Woke-up and carried out house chores (sweeping, fetching water, washing dishes, shower, breakfast) and departure for the office in Bafoussam;

-Short meeting in the office to brief all volunteers and assigned them to respective task;

-Preparation of other didactic materials to be used during the education outreach i.e. questionnaires, charts.

-Review of the lesson guide to be used during the education outreach.

-Translation of materials to be used from English to French.

-Wake-up and morning routine (including some laundry);

-Cleaning of the office;

-Completion of the preparation of materials including the transcription of animal welfare messages on charts.

-Vaccination of two dogs by OIPA’S Veterinarian against rabies and the administration of multi vitamins;

-Revision of the items prepared to be used then retired at the end of the day;

-Cooking once back at home, two hours relax then bedtime.

-Usual morning duties; waking-up and breakfast before leaving for the office;

-Cleaning the office upon arrival;

-Preparation of ‘feeling in cards’ and rounding off with teaching materials;

-Preparation and translation of program of activities to be followed during the education outreach.

-Cleaning the office upon arrival;

-Arrival of the team from Douala to the Bafoussam office;

-Warm reception to the new member of the team and chats about the journey spiced by the Pangolin seller;

-Preparation of information placards to inform the locals of the free treatment and vaccination to be given to cats and dogs on Saturday 11/05/2019;

-The team retired to the lodging house, dinner to be prepared and relax, then bedtime.

-Cleaning of the office upon arrival;

-Acquaintance and elaborative meeting with all OIPA volunteers and a presentation of the activities to be carried out in the days ahead;

-Welcome word from the National Coordinator with a brief presentation of OIPA and its activities for the previous 7 years;

-Welcome dedicated to an international volunteer who braved all odds to have a working session with OIPA Cameroon;

-Appreciation words from Miss Rose who apologized for her short stay but was enthusiastic getting started with work at OIPA Bafoussam;

-Movement to Bameka market to paste placard on the treatment scheduled for the 11/05/2019;

-Group discussion with locals in market and village and divulgate educational talks on animal welfare; A child was spotted beating up a pig and was assigned to sell it to the market. The team sensitized the child !

-Visitation of the Bameka community forest though we were prohibited from entering the forest due to cultural principles;

-Visited the Chief’s palace, unfortunately the Chief was not on seat as, at the moment of visitation, he was home for the day.

-Walk through the Bameka community and a door to door identification and sensitization of pet or animal owners;

-Group discussions to locals on the vitality to extend kindness and care toward animals which in turn helps us treat other people with respect.

-Morning duties and then breakfast;

-Visited the University of Dschang to partake at the launching of the university games;

-Preparation of dinner, eat, relax and off to bed.

-Presented letter from the Inspectorate of Education then sought permission to have a training session with the pupils from the head master which was granted;

-Teaching lessons was designed to be very interactive and pupils sought to answer questions and were rewarded with gifts;

-Creation of an Animal Welfare club to stand as animal welfare ambassador for the entire school made up of 5 groups;

-Pupils mandated to stand for animal welfare in and out of school as well as tasked with the duty to be innovative in as far as activities of the animal club is concerned;

-Pupils were grouped and assigned to draw animals of their choices which they did amazingly well so was later pasted on the walls of their classrooms;

-Pictures of pupils were taken holding messages promoting animal welfare; these messages were also pasted on the walls of their classrooms.

-Very enterprising pupils were provided with books during the session and encouraged to get the message of animal welfare into their homes and communities.

-Sought permission from Head master alongside the authorization from the Inspectorate;

-Head master assembled pupils in a classroom and a similar routine for the teaching activities and lessons was carried out in all visited primary schools (above).

-Similar routine for activities carried out in all visited primary schools (above);

-Departure of the international volunteer prior to anger and misunderstanding.

-A second visit was made at GBPS Djut, to assess the presentation of the Welfare club and gave them tips on how to do better and be more creative.

-Setting up of banner and materials for the treatment and vaccination of cats and dogs;

-Over 31 pets were treated with specifically 7 cats, 21 dogs and 3 stray dogs.

-A symbolic meal was prepared and share and a review of the successes and shortcomings of the educational outreach discussed;

-Visit to the quarter head to appreciate the community’s’ welcoming efforts to strangers and also to bid farewell since the program had ended;

-Departure of Volunteers to their respective destinations.

The teaching program provided short, enhanced presentation to help children understand the needs and care of animals, and especially encouraged the development of empathy and compassion.

Pupils partaking in the program learned to:

-Recognise sentience in both humans and animals.

-Realize animals have feelings and instigate compassion with those feelings.

-Provide ways in which we can care for Pets.