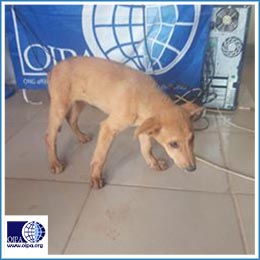 US$350 will provide a pen/kennel, food, neuter surgery, and vet care for two years.

Debora Lum and her eight-year-old granddaughter, Nangah Angel, live in Alamadu in Makon village in the North West Region of Cameroon. Deborah is a 75-year-old subsistence farmer. She is also an animal lover. OIPA-Cameroon first met Debora in November 2018, when we carried out a mass vaccination, treatment, and educational campaign in her village. Debora had brought her cat for a check-up and vaccinations.

At that time, we distributed educational charts about animal health and our contact information to all animal owners who attended the clinic. Since then, we have been helping Debora by providing her with cat food and veterinary care.

On April 10, 2019, Angel called an OIPA volunteer very early in the morning asking him to meet her at the OIPA-Cameroon office-she needed help for a dog. A vet joined them soon. 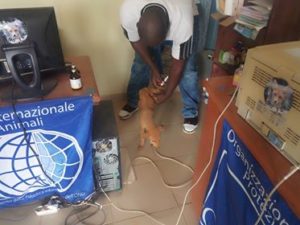 Once they arrived at the OIPA office, Angel and Debora told their story:

Two days prior, they rescued a puppy under a bridge while walking to their farm. They took the puppy to the farm for the day, and then brought him-now named Sonel-home.

Debora told us that Angel had refused to eat because the puppy had not eaten for two days, adding that she was ready to do her utmost to save the life of the puppy and put a smile back on her granddaughter’s face. Debora had brought the equivalent of US$1 to cover the vet bill.

The vet examined Sonel and concluded that he probably ate and drank bad food and water. Sonel was also severely malnourished. With some 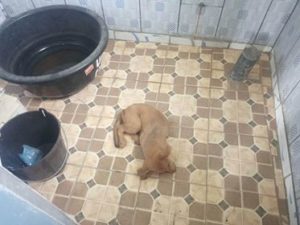 healthy food, vitamins, and clean water, Sonel is expected to gain his strength and energy back.

On top of that, Debora lives in a rural community, where animals aren’t typically held in high regard, yet she understands how important the puppy is to her granddaughter and that animals can make people smile. When we asked why Debora rescued the puppy, given her difficult financial situation, she told us that her granddaughter is passionate about dogs so she had no choice.

By the time Debora and Angel left our office, Sonel was looking better, and the family was very happy. We consider them heroes for saving the life of this beautiful pup. They are good examples to others in their village.

Debora and Angel are willing to do their best for Sonel but Debora has very limited means.

OIPA-Cameroon has committed itself to help them keep Sonel and we ensured them we would do all we can so they can keep the puppy healthy and part of their family. Angel had been asking her grand mum for a dog for a long time, but Debora said they couldn’t afford one. Now she has changed her mind, but she needs help!

We are hoping to provide a cage to keep Sonel safe when Debora and Angel aren’t around, dog food, and continued vet care. Sonel will need two more rounds of shots, regular de-worming and tick and flea treatments, and until he gains weight and his condition improves, he will need vitamins. 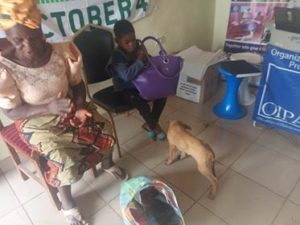 We are pleading for donations to support Debora and Angel and give their puppy the chance to grow and thrive. We hope to raise US$350, that we estimate will provide Sonel’s neuter surgery and the care that Sonel will need for the next two years. Of course, we will keep our commitment to Debora and Angel throughout Sonel’s life.

To make a donation, please visit: https://www.animal-kind.org/aki-donate or https://www.oipa.org/international/oipa-camerun/ and indicate OIPA-Cameroon when you donate.