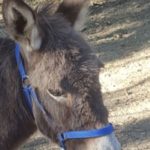 A donkey sensed a hungry wolf
was slithering about,
so he began to limp and moan
until the wolf cried out:
What makes you limp, my donkey friend?
Why such a mournful bray?

Oh, wolf, this thorn stuck in my hoof
has cut my foot all day.
And it would cut your tender mouth
If you devoured me,
So pull this thorn before you bite!
Avoid that agony! Therefore, wolf picked up that donkey’s hoof
and looked up underneath
And WHAM! The donkey kicked just once
and wolf lost all his teeth.Ah, what a fool I was, lisped wolf,
as donkey turned to flee,
to trust the words of anyone
who lives in fear of me.

This fable of Aesop, the famous Greek writer, draws attention to something that may sound strange: donkey’s intelligence. Donkeys are in fact a highly brilliant animal despite popular misconception and stereotypes.

We are used to the idea of donkeys as animals at man’s service. And yet even donkeys enjoy such a respectable position in ancient myths and religions.

Somalian wild asses are the ancestors of the modern domestic donkey. These asses are still alive today, but are listed as critically endangered on the IUCN Red List.

The ancient Egyptians and the inhabitants of Libya started the process of domestication. The history of donkeys is tied to human history. Donkeys were first used by people in agricultural activities. In the past, donkeys had a high purchase value – in Roman times, donkeys were really expensive: up to 400.000 sesterces, equivalent to tens of thousands of euro.

Despite the critical role that it played in travel and transport throughout human history, the donkey is often the butt of jokes and garners little respect. Donkeys have always enjoyed a reputation as “stupid animal”. As early as sixth Century DC. Isidore spoke of it as “lazy and foolish” and Homer described it as “tardus”. The Romans referred to people who could not read and write as “donkey”. Well known is the phrase “Quid nunc te, asine litteras doceam?” (Should I teach you, donkey, how to read and write?), common in the schools of the Roman Empire.

Actually, the idea of donkeys as a dumb animal come from their stubbornness.

Although we are used to think of donkeys as animals in the service of man, they have a difficult character and are not easy to domesticate. Their characteristics make them more “rebel” than “stupid”. And this is why donkeys that helped with the farm work had such a high cost. The same went for those students deemed rebels that, as punishment for flouting the rules, were forced to wear the ears of a donkey. 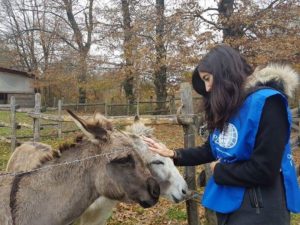 A symbol for sexuality

For sure, only a handful of people know that both for Egyptians and Greeks donkeys were a symbol for sexuality. Legend says that Priam, madly in love with Vesta, the virgin goddess of the hearth, the home, and family in Roman religion, would have tried to abuse her. The plan failed because of a sudden donkey’s bray that woke her up. Every ninth of June, on the celebratory day in honour of Vesta, donkeys were crowned and honoured for saving the goddess, and did not have to work. In the famous book Metamorphoses of Apuleio, the leading character Lucio, a man with the lowest instincts, was accidentally turned into a donkey. His life became a series of epic adventures that ennobled him and contributed to his spiritual elevation.  It is only at that point that he could once again become a man. This ancient story recalls the vicissitude of Pinocchio and his similar transformation into a donkey. The fables often arise from ancient myths and the wooden puppet, in the same way as Lucio, who too was transformed into a donkey, will have many experiences to live to rise up to the spirituality and become a human again.

Another aspect that is often not well known is related to the perpetual youth that donkeys represent and that is a reason why many rich women, including Poppaea, bathed in donkey milk to stay young forever. In De Natura Animalium (On the characteristics of Animals) by the Greek writer Aelian, Zeus, livid after he caught Prometheus stealing fire from the gods and giving it to humanity, wished to reward those who disclosed the thief’s name with an anti-aging drug. This concoction was drawn by a donkey that drank from a water source on the way. A snake stopped him, with the pretext that that was its water. The donkey gave the snake the drug as a gesture of kindness, inviting it to do the same. The snake accepted and the donkey had the chance to drink. Snakes are considered a symbol of immortality as they cyclically change their skin. This myth represents donkeys as givers of immortality…but only if we are nice to them!