False PPRV alarm: a meaningless slaughter of 30,000 of sheep and goats in Bulgaria 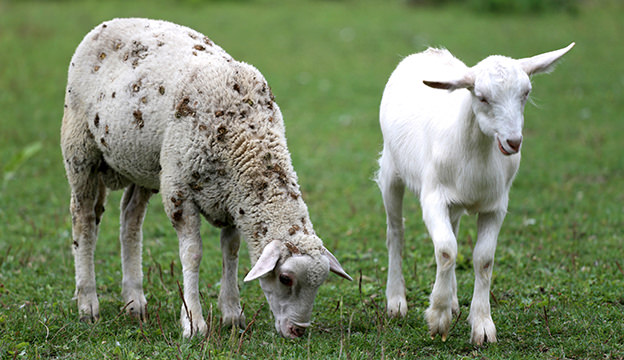 In the region next to the Strandzha Mountain, located on the border between Turkey and Bulgaria, people’s main activity is livestock farming (mainly cows, sheep and goats). In the Bulgarian part, most of this territory is a protected area, being part of a National park, i.e. any industrial activity is forbidden. Moreover, industrial agriculture is almost impossible since the region has numerous big woods and the soil is relatively poor.

This region was well protected and had a real border between Turkey and Bulgaria before 1990 because of the Border Army. No people or animals, including wild ones, could migrate from Turkey to Bulgaria.

In the beginning of June, a farmer from the Voden village noticed that his cattle was showing some symptoms of PPRV (that are also common for a long list of other diseases, including non-contagious ones) and two animals died a few days later. Local veterinarians did exams, took samples, and sent them to a lab.

The necropsy of the deceased animals proved negative for PPRV. At that time, no other animal was sick and the situation stayed like this for more than 40 days. No farm in Bulgaria, including those in the “stamping out” list, showed symptoms of any disease (including PPRV) at that day.

Nothing has been seen in goats (!) except for a few cases of nasal and eye discharges. Only one sheep died.

The samples were sent to Sofia (ELISA testing), some of them were positive for PPRV, and then sent to CIRAD, France (real time RT PCR). 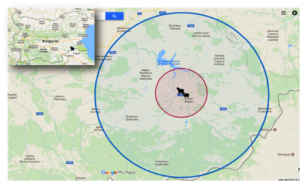 In total, what we have:

However, some important points to be considered: 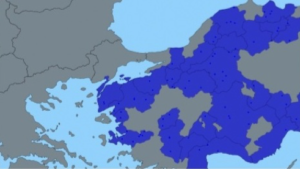 Therefore, what we know about PPRV in Bulgaria is: 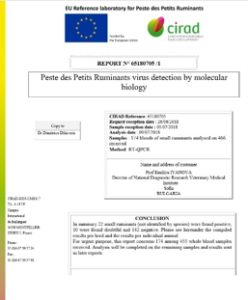 Even presuming that PPRV is a real issue in Bulgaria, what measures should be taken to localize and neutralize the outbreak?

Based on the Directive 92/119 and on the National Contingency Plan, and according to a correspondence between the OIA and Dr Damyan Iliev, Chief Veterinary Officer and Deputy Executive Director of the Bulgarian Food Safety Agency, the Bulgarian Ministry of Agriculture and Food adopted the following measures as of 24/06/2018:

Therefore, we have seen that facts confirm that there is no PPRV, and out of all the measures, the only one properly applied is stamping out – the rest is either not done, or done inappropriately.

There are a few interesting facts concerning the issue:

A Training Workshop for PPRV prevention was held in Sofia on June 6-8. The lector, Geneviève LIBEAU from CIRAD Astre Unit, came from Montpellier, France.

The presentation mentioned that vaccination is possible and even preferable in regions at risk. 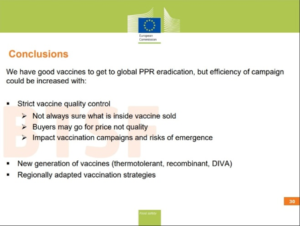 The same reference laboratory proves the presence of such a virus in Bulgaria, on 23 June, some 15 days later.

Another interesting fact from the presentation:

While there are rumors in Bulgaria that the vaccine is “not available”, “not approved by the EU”, on page 21 of the presentation made by virus experts, a part for government representatives is present and published on the NVS website. It states that for 2010-2012, in Turkey “EU-sponsored 3-year vaccination and marking program with 30 million ear tags heads of sheep and goats“.

The same document, just like scientific literature, says that vaccination is an effective measure to stop the spread of the disease. The Nig 75/1 vaccine is locally produced in Turkey, which means that the Turkish economy has driven more than 30 million vaccines produced and used with EU sponsorship.

The Bulgarian authorities offered a partial payment for the sheep’s’ vaccine of around 190 leva (€97) per ewe, slightly under their market value.

Threatening EU restrictions on the export of dairy products have encouraged the Bulgarian government to euthanize more than 4,000 sheep and goats in villages close to the Turkish border. 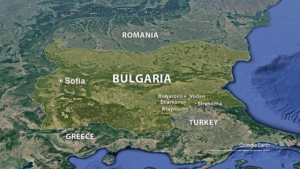 Voden, one of the villages, was quarantined in order to slaughter the animals and fully disinfect the town. Casualties included 586 sheep and 24 goats.

The European Commission says measures to fully compensate animal owners for their losses have been put in place and the owners are eligible for the EU financial support at a rate of 75%.

“The doctors are now saying that my 31 missing animals died from plague, but I know they didn’t, and I have proof. I am under an EU program and if these animals were dead, I needed to tell the doctor to take them out from the record,” said Dochka, the owner.

Dozens of Bulgarians have rallied together in Bolyarovo in support of these devastated farmers. Bolyarovo is the largest of the five villages that have been affected and has become the last refuge for livestock in the area. 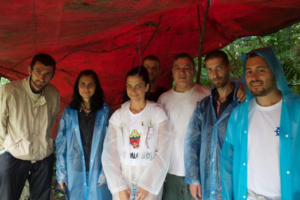 Supporters say that they are not politically motivated, but they do not believe the government is telling the truth about the plague outbreak.

Bolyarovo is home to 41-year-old Ana Petrova, who is desperately hoping that her 203 sheep will be spared. At the entrance to her farm, the police checks ID’s of supporters entering, and on the way out, cars are being disinfected with chlorine.

“I think there are better options”, says Petrova, “This is pressure and stress we, as farmers, don’t need. We wanted a dialogue with the doctors, the same doctors that we trusted before. But the secretive way they are handling things makes me doubt there is any disease at all.” Petrova says she has been told that her sheep will have to do a second blood test next week.

The European Commission for Health and Food Safety wants to ensure the containment of the virus by applying very strict regionalization, to protect the disease-free area of Bulgaria and the rest of the EU.

The Bulgarian Ministry of Agriculture, Food and Forestry said in a statement that, as an EU member state, Bulgaria can legally institute animal vaccines if it is in the essential interests of the community it is affecting. However, it comes at a great economic cost, as a ban on live animal trade and the exportation of meat and dairy products for at least two years would follow the decision.

What we are talking about is therefore not a PPRV issue and not even a veterinary one – it is political. This policy in this region is the fourth one. The misuse of regulation, the chaotic implementation of measures have only one result – depopulation of the entire region. Depopulation exactly like ethnical cleaning: not with military methods, but with administrative ones – the outcome is the same.

Turkey will have the region for its purposes almost free, probably even for installing a gas pipe, too, as this is the key region for Turkish Stream Project of Gazprom, and/or TANAP.

Yet, there keeps on being no PPRV in Bulgaria, 30,000 sheep and goats will be killed in the next weeks and the region will be depopulated.

Food and Agriculture organization of United Nations, Global strategy for control and eradication of PPR, p.25-31- Manual and regalements for dealing with PPR:
http://www.fao.org/3/a-i4460e.pdf