GALGOS: THE GREYHOUNDS DOGS FORCED TO RUN BUT THEN KILLED

Considered as ‘working dogs’ they are not formally considered part of the ‘Pet category’ and, therefore, are used as objects for income instead of friends.

Galgos dogs are exploited in order to run as fast as they possibly can but when they are not up to it, then they are slaughtered….their lives are short, from 3 to 5 years!

So whilst  Spanish puppies of any sort still live in houses, loved and cared after like little princes, at the same time, in the countryside of the south (- Extremadura, Andalucia, Castilla – La Mancha, Castilla – Leon, Madrid -) the Galgos are hated and massacred and unwanted as soon as they are no longer needed because they become unsuitable for hunting and running competitions. 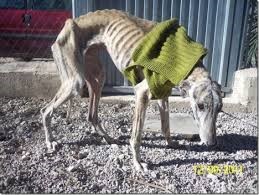 A part from hunting, their life flows without positive stimulation. Basically, they live without little human contact, they receive no manifestation of affection. These dogs commonly used for ‘hunting sight’ sport can reach extremely high speed. They are not properly fed so that they turn more aggressive while hunting. Once the hunting season is over in February they are abandoned.

These species are the most tortured dogs of the whole world, from decades. From their birth they are forced to sleep in holes dug in the ground and are kept alive just by bread and water. They are constantly trained but in a exaggerate way,  in a dangerous way, in order to push them to run at extreme speed and, in doing so, are often tied up behind a running car or on a tapis rulant!

These are the Galgos from the so called ‘civilized’ Spain, within the European Community. Animals for income and not for love. The government does very little to change the situation of the Galgos. This is because many of their members are hunters themselves!!!!!The most famous race being the Copa del Rey, has reached its 78th edition! In a country that has almost 17 thousand confederate Galgueros (official breeders) and where there is no kind of registration over their births nor deaths, the Galgos are unfortunately left to their horrible fate. Galgos breeding is unlawful as there is no checking and numerous puppies considered unsuitable or not pure breed are killed. A single galguero can own up to 10 dogs. Most, without a tattoo or microchip. Unique signs of identification are cuts in the ears, using scissors and without anesthesia…….!!!!  The fifth finger is also amputated to most galgos, to prevent them from injuring themselves when they run. The finger is often cut off brutally by the galguero himself…. The Perreras are tremendous Spanish kennels where Euthanasia is still common practice.

It is easy to imagine that there are no treatments for pests or vaccines. On the contrary, dogs often live in precarious hygiene conditions dirty of their excrement. They are skeletal and furrowed by sores, because they are forced to lie directly on the hard ground and the protruding bones pierce their thin skin.

Although there are laws in Spain against animal mistreatment  how can it be possible that you still see right across the street Galgos hanging down from branches of trees even making them touch the ground with their paws so that their death is more painful or abandoned in the street with broken legs in order to force them to quit racing, burnt alive or thrown into rivers with a weight around their neck….!!  Nonetheless, animal associations that take care of them in Europe are proliferating and, often, after having re-educated them, they manage to find a safe home for them. Remember, that Galgos are not aggressive dogs, on the contrary they are meek and obedient….. Indeed, they are involved in pet therapy activities, rescue greyhounds are excellent “therapists” able to help people in need. Numerous and wonderful experiences with autistic and dyslexic children are the unequivocal demonstration that greyhounds are profoundly different from the image that they give to those who exploit them.