QUINOA, THE MOTHER OF ALL GRAINS 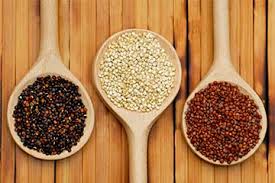 QUINOA, THE MOTHER OF ALL GRAINS

Quinoa is a pseudo-cereal, not technically a grain or a traditional cereal. This means it is a non-grassy plant used in much the same way as cereals and grains with a similar nutritional profile. Whole grains include the entire intact grain seed without removing any of its parts. Whole grains, such as quinoa, provide essential vitamins, minerals, and fibre. These help regulate the digestive system and keep you fuller and more satisfied.

Although there are approximately 120 varieties of quinoa, the three most commercialized of these are the white, red, and black varieties.

A BIT OF HISTORY…

It all started about 4,000 years ago in the Andean region of Peru, Bolivia, and Chile – where humans had domesticated it for consumption. However, archaeological evidence says quinoa originated some 7,000 years ago.

The plant was grown in the high altitudes ranging from 2,000-4,000 meters in the Andes, where every year, the Incan emperor customarily sowed the first seeds. It was a very important agro plant for the Incas.

Quinoa formed the staple diet of the Incas and their descendants and around the time of Spanish arrival, quinoa was well developed technologically and well distributed within the Inca territory (Incas referred to it as “mother of all grains” and “the gold of the Incas”), where it was believed to be sacred and provide stamina to Inca warriors.

In the recent past, the Peruvian government has been giving incentives to farmers to increase the production of quinoa because of its outstanding nutritional qualities.

Only a few years ago quinoa became trendy and reached “superfood status”.

The quinoa plant has been highly regarded for its high protein value. Protein is made out of amino acids like lysine, methionine, and tryptophan, all of which cannot be synthesized in the body. The problem is that many plant foods are deficient in certain essential amino acids. However, quinoa is an exception to this, because it is a “complete” protein, it contains all the essential amino acids.

Quinoa has antioxidant properties that help in protecting the heart, liver, kidney, lungs, and pancreas against oxidative stress. When compared with other pseudocereals, such as amaranthus, it has higher antioxidant activity.

Quinoa seeds can be beneficial in regulating blood glucose levels and blood cholesterol levels. The consumption of quinoa seeds can help in reducing the adverse effects of fructose on both the glucose level and lipid profile. Using quinoa instead of typical gluten-free breads and pastas significantly reduces blood sugar, insulin and triglyceride levels.

Quinoa is also considered good for reducing the risk of cardiovascular diseases. Eating quinoa means lower levels of bad cholesterol and this means a reduced risk of atherosclerosis and coronary heart disease.

Quinoa contains insoluble fiber, which helps to improve the digestive process and facilitates healthier bowel movements. This further helps in reducing the risk of bloating, pain and constipation. 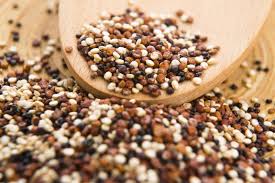 Quinoa improves metabolism as well as significantly reduce appetite. This is particularly important for those who want to control their diet. Consuming quinoa reduces the excess intake of food, thereby promoting a healthier weight. The high amount of fiber should also help to increase the feeling of fullness.

Quinoa is rich in B vitamins; nutrients that help treat age spots and other conditions related to skin pigmentation by reducing the deposits of dark melanin in the skin. And the vitamin B3 in quinoa, helps treat acne. It soothes the red and inflamed areas often associated with acne breakouts. Quinoa also contains vitamin A, which reduces fine lines and makes your skin look young.

A diet adequate in iron can help prevent anaemia. One cup of cooked quinoa contains about 3 mg of iron, which is 15% of the daily requirement. Another nutrient to look at in this aspect is riboflavin – which quinoa is rich in. Anemia can also be caused due to less riboflavin in one’s diet.

Quinoa is a whole grain, and whole grains are great for diabetes. A part of living with diabetes is all about taking foods that have low glycaemic index, and quinoa is on the lower end. A diet including quinoa could help manage type 2 diabetes and the hypertension associated with it.

A gluten-free diet can be healthy, as long as it is based on foods that are “naturally” gluten free. The problems arise when people eat “gluten free” foods made with refined starches instead. These foods are no better than their gluten-containing counterparts, because gluten free junk food is still junk food.

Quinoa uses are many, you can use this grain in just about everything, from breakfast to dinner. Quinoa has a nutty and earthy flavor. After cooking, it becomes quite fluffy and chewy and attains a very pleasant taste. The pearly white quinoas or light yellow quinoas are the fluffiest while the red and black ones are more compact.

These days, you can find quinoa and products made with it all over the world, especially in health food stores and restaurants that emphasize natural foods.

Mix dry ingredients in a bowl. Add liquids and whisk to mix.

Preheat pancake griddle. Spoon batter onto hot griddle making pancakes 4-5’’ across. Turn when edges seem dry (they won’t brown much because they don’t contain sugar). Keep warm while cooking remaining cakes. Batter may thicken as it stands, if so, stir in 1-2 tbs water as needed.

Quinoa soup with spinach and tomatoes

Heat olive oil in a large sauce pan, add red onion and sauté until onions are transparent. Add garlic, salt, pepper and rosemary, and heat for a minute or so.