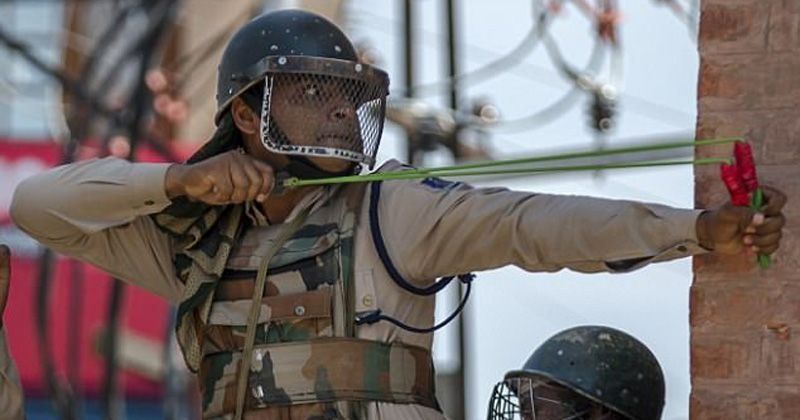 OIPA representative in India Mr. Naresh Kadyan sent a complaint to the Ministry of Environment, Forest & Climate Change and the Ministry of Home Affairs against the commandant of the CISF Unit responsible for the Taj Mahal area.

CISF Central Industrial Security Force is an armed force of the Union raised under an act of the Parliament. Among its tasks, it provides security both inside and outside the Taj Mahal.

According to OIPA India, CISF jawans (junior soldiers) have been equipped with catapults to keep away monkey menace all around Taj Mahal monument in Agra. The CISF Commandant is therefore held responsible for misuse of power, adopting unethical methods in violation of the Prevention of Cruelty to Animals of 1960 and of the Wildlife Protection Act of 1972, also spoiling the image of India before the International community. 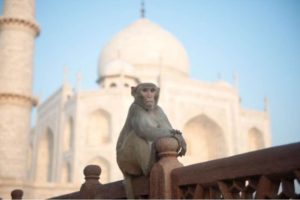 Back to the root of the problem

Rhesus macaques are Asian monkeys. In India, the country’s majority Hindu population regards monkeys as sacred – they are associated with the god Hanuman, the monkey deity renowned for his courage, power and faithful, selfless service. Monkeys are usually left and have an important history with humans.

There are currently 500-700 rhesus macaques living by the Taj Mahal, which forage for food around the entrance of the monument, where visitors’ bags are scanned and food thrown away. Indeed, tourists are not allowed to carry food into the 17th century monument, and many dump containers in trashcans near its entry gates, attracting the monkeys.

The monkeys have been an issue for a while, but it spun out of control recently with the increase in their number.

Actually, the threat of an attack is real. Every day, about 25,000 tourists visit the Taj Mahal, rising to 80,000 during the peak tourist season. Incidents of attacks or bites are on the rise. Last November, a monkey snatched a 12-day-old Indian boy from his mother while breastfeeding him. The monkey dropped the child on a neighbour’s roof after locals gave chase to the animal. The baby died of his wounds in hospital.

Local authorities seem incapable of finding an effective solution to this problem.

Despite the danger, they are protected under the Wildlife Protection Act of 1972. Capturing, hunting, or killing them is a violation of the act, which may lead the offender to a judicial trial with fine, imprisonment, or both.

The root cause of this conflict between humans and rhesus macaques is the eradication of natural habitat, forcing monkeys into proximity with humans. As India’s urbanization rapidly expands into the forests and wilderness, the new blocks replace monkeys’ natural habitat.

The 700 or so rhesus macaques that live by the mausoleum are descendants of the monkeys who lived in the area when it was a jungle centuries ago. They have been forced to adapt to living alongside humans, as cities have encroached on their natural habitats. 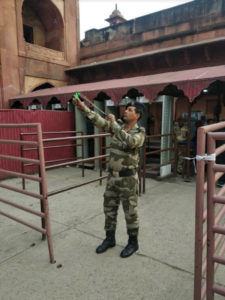 As their habitat dwindles, they are becoming more aggressive. They are not used to foraging in the forest anymore and prefer to settle in the city, as it is much easier to find scraps of food.

Beside the modern arms they possess, the jawans of CISF Central Industrial Security Force are now equipped with “gulel” (locally made slingshots) to fend off the monkeys that harass visitors at the Taj Mahal.

However, despite the danger, India’s Wildlife Protection Acts means it is illegal to harm wild animals, including monkeys. The jawans are supposed to use slingshots only to scare the monkeys and drive them away when they get too close to visitors. 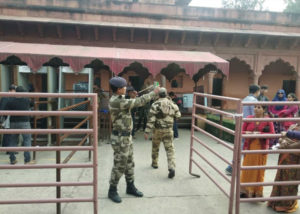 An oral contraceptives plan is challenging to implement, as it is difficult to ensure monkeys assume the correct dosage. Injections are more practical, but at the same time too expensive: a single dose costs nearly 100$ and lasts one year, and after that booster shots are necessary.

Efforts to move the monkeys to forests are totally useless because they will likely move into areas where humans make food readily available, so they would simply make their way back.

Complaint against CISF for its unethical methods of monkeys menace management

Do not try to go closer to them

Do not block the path between a mother and her infant