“In Indonesia, every year millions of dogs are brutally caught and transported for the dog meat trade. There are many stolen pets and illegally trafficked animals collected from the streets and rural communities. They are squashed into cages and packages so tightly that they cannot move nor breathe and transported in atrocious journeys on bicycles or overcrowded trucks to supply markets, slaughterhouses and restaurants. Many die from suffocation, dehydration or heat stroke before they reach their final destination. For those who survive, their sad destiny is to see others being brutally killed in dirty slaughterhouses while they wait for their turn.”

The cruel and barbaric dog and cat meat markets in Indonesia’s North Sulawesi, are being encouraged as tourist attractions! This must be suppressed!

In December 2017, the Dog Meat-Free Indonesia coalition conducted investigations at Indonesia’s “traditional markets” in North Sulawesi, including the notorious “Tomohon Extreme Market”.
Every year, millions of dogs are brutally transported throughout Indonesia to fulfill the demand for dog meat.

WHO (World Health Organization) has declared dog meat to be extremely dangerous for humans as many of these dogs are Rabies Virus Positive. 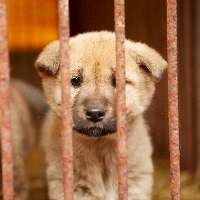 There have been reported cases of human mortality from rabies in direct relation to the involvement in killing, slaughtering, handling and especially consuming meat from infected dogs.  Moreover, although it may affect only a minority of Indonesians, trade actually threatens the health of the entire nation!

The WHO emphasizes the impact of this trade on the spread of rabies in Indonesia representing the biggest obstacle for the “Rabies-free Development Goal” in Indonesia expected by year 2020. Single associations as well as the WHO itself are supporting the government to ensure Indonesia fulfills its promise to eliminate rabies by 2020.

Humane Society International has launched a petition to the president of Indonesia, Joko Widodo, that has just been closed. It states that they are deeply concerned about the dogs involvement in brutal meat trade in Indonesia and the risk it poses for Indonesia’s efforts to eliminate rabies by 2020. It has a National and International appeal, nonetheless we are still waiting for the reaction of institutions and authorities.

Promotion of responsible pet ownership is taking place in Indonesia. Pet owners are increasing rapidly in Indonesia and therefore come into play aside animalist organizations to protect dogs from cruelty.

When it comes to the bond between dogs and humans, the term “man’s best friend” is frequently used to describe this particular inter-species relationship. The dog meat trade is the ugliest possible betrayal of this unique kind of relationship!

Throughout Asia there is growing malcontent and dissatisfaction concerning this cruel trade; an increasing number of countries and territories are finally trying to prohibit it. Fortunately, the overwhelming majority (93%) of Indonesians do not eat dog meat.  Indonesia is the most Muslim country of the world; nonetheless, the Koran forbids the eating of meat from impure animals. Among these are pigs, wild boars, donkeys, horses, mules and dogs! And, on top of all, it does not teach to mistreat them and inflict ujustified pain and suffering.

OIPA’s member league in Indonesia AFJ Animal Friends Jogja is a non-profit legal organization that works to improve animal welfare in the special region of Yogyakarta, through Adoption, Education and Sterilization campaigns. We thank AFJ for all the information received.

AFJ is currently joining the DMFI (Dog Meat Free Indonesia), a coalition, as well as a cluster of other associations.