JAPAN, STOP ABUSING ANIMALS IN THE CAFES – SEND A LETTER OF PROTEST!

A business aimed at “interaction” with animals has been spreading the last few years. Among them, cafes using owls and other animals are increasing in number.

Being healed by interacting with charming owls with big round eyes, that’s the selling point for the owl café. However, the owls do not agree to heal people. 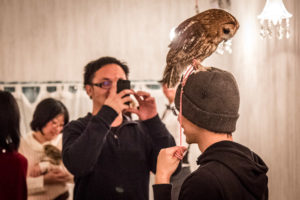 It’s called “interactive” but there is no “interaction” there. Some are constrained and the others are unilaterally touching them.

Owls are used for commerce, being stuck with a short leash, not able to drink water when they want to, getting their pictures taken, and are not able to fly away when they are touched.

This petition is going to be submitted to the Ministry of the Environment and other addresses of the Japanese Government.

OIPA demands the interactive café to end their business model that uses animals for entertainment.

Many “Owls cafes” claims that the raptors are rasied as pets and therefore they do not suffer captivity. But watching the video is so obvious that these animals deserve to be free, not kept in these conditions and

Regrettably, there are quite a few cafes which provide animals for the visitors to touch or take pictures with them. There are more than 300 cat cafes which outnumbers other animal cafes. Other than cat and owl cafes, there are in Japan rabbits and reptiles cafes, says OIPA Member League JAVA (Japan Anti-vivisection Association). 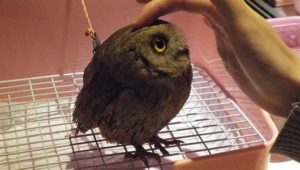 Owl café is getting popular. We don’t know the exact number of the cafes, but probably around 30 owl cafes in Japan.

Animal café business is legal because they have made registration to the local government based on the Japanese animal welfare act. The Japanese act even allows the public to keep owls as pets.

Some parts of the rules and regulations of the Japanese animal law are not clear. As a result animal rights groups and local government sometimes interpret it differently.

In order to improve the conditions of the animals of Japan including owls kept at cafes, a revised animal law which explicitly expresses definitions of “cruelty” is needed.  As the Ministry of Environment will start the work of revising the animal law next year.

OIPA asks to the Japanese Government to revise the Animal Welfare Act and protect the animals from these abuses.