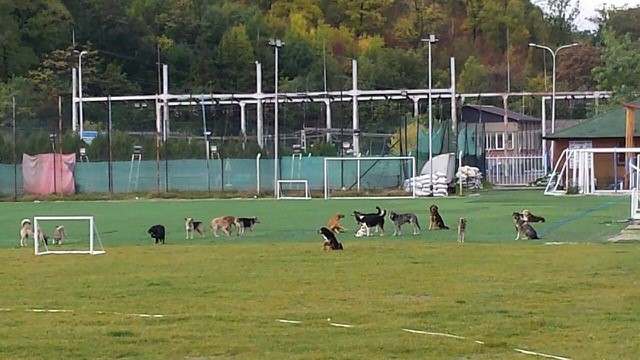 Kosovo is the poorest country on the whole European continent. The war in 1998/99 destroyed everything, men and animals, and at the time Kosovo was recognized by most states as an independent country in 2008 there were only few strays. Within 8 years the stray dog population increased incredibly, because Kosovo does not know any dog owner responsibility. The government produces no chips and has no central registration of owned dogs, nor is there a control of dog breeders. People love puppies for their children to play with, but do not like, when the dogs grow up and need education. Instead of training, they abandon them. No owner spays or neuters his dog, on one hand most citizens are not informed about this possibility, on the other hand they have often not enough income to pay for treatment or surgery. As most dog owners let their dogs stray, females reproduce every half a year up to nine puppies. The puppies are killed or dumped in the fields and municipalities, some survive and reproduce again.

Furthermore dog owners abandon their animal, when it is sick with mange, distemper or parvo, because they cannot afford to pay for veterinary help. Many dogs live near the garbage hills, but as garbage is everywhere, they can survive and reproduce in any place, and even though the dogs suffer of many diseases, some puppies always survive thanks to food that is available everywhere in the streets and the dog population increases therefore every half a year. No killing program in previous years or as started through hunters in Kline this summer 2016 or executed by veterinarians in Prizren 2015 could stop the increase of the stray dog population.

Not unimportant considering the stray dog situation is as well the fact, that there are only few veterinarians for pets in Kosovo that would treat them and sterilize. Most of those veterinarians practice in the main town Prishtina, because there they can charge for dog and cat treatment as much as they want, as there they have international clients (UN, UNMIK, EULEX, KFOR). In the country side 95% of the vets are specialized on large animals and have not much experience on modern pet treatment or proper sterilization of stray dogs – which need a very small cut of 6 cm when spayed, because they have to be released as soon as possible again.

Stray dogs are not vaccinated or dewormed and therefore responsible for many diseases, specially concerning farm animals – and in most cases owned dogs never see a veterinarian. Like everywhere the dogs excrements pollute fields, the grass is consumed by cows and sheep and so the transfer of parasites to men can occur. Public health is one of the main concerns of the AVUK. Echinococcus is dangerous, Rabies as well – although there is not one case reported in the last 15 years. Leishmaniose, in the Western part of Kosovo existent, can also be a problem for the peoples health. And finally groups of aggressive hungry stray dogs can be dangerous for children!

StrayCoCo accepts all this worries and considers public health an important topic. BUT: A castrated, vaccinated, dewormed dog without aggression symptoms is not dangerous. Very sick or aggressive dogs must be euthanised, this is widely accepted. But all friendly and healthy dogs should be released in their territory, where they protect it and its humans, if they are friendly to them. As the amount of stray dogs in Kosovo is incredibly high, there can never be build enough shelters to keep and protect them all. CNVR – catch, neuter, vaccinate and release is therefore in the next few years the only efficient and human treatment method for stray dogs.

Since January 2015 StrayCoCo and its Partner Veterinary clinic Pro Vet have registered, treated and sterilized around 2500 stray dogs in the western Municipalities Peja, Decani, Gjakova and now Rahovec, as well as in some villages. We encourage citizens to bring their dogs for treatment and sterilization to our clinic. And if AVUK would import more effective vaccines, for example Rabies vaccinations that provide protection for three years instead of one year, then another health risk would be solved. Furthermore our veterinarians visit primary schools in Gjakova and soon in Rahovec to teach children about dog behaviour and the emergence of stray dog populations.

BACK TO MAIN PAGE