LEMURS BECOME THE MOST ENDANGERED MAMMALS ON EARTH 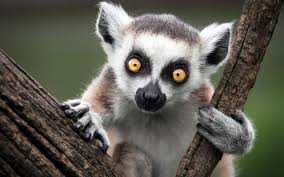 BREAKING! LEMURS BECOME THE MOST ENDANGERED MAMMALS ON EARTH WITH 95% OF THE SPECIES BEING AT RISK OF EXTINCTION

Lemurs are widely known animals, mostly because of the film “Madagascar”, after which they conquered many people’s hearts and definitely helped boost tourism in Madagascar. The island owes a large part of its popularity and attractiveness to this adorable primate and yet, the situation today is alarming and lemurs are at serious risk of extinction.

The International Union for Conservation of Nature and Natural Resources (IUCN), a union regrouping numerous environment protection organizations, released a statement on 1 August, according to which 95% of the world lemur population is “on the verge of extinction”, making them the “most threatened primates on Earth”.

Russ Mittermeier, a member of the Commission in charge of the survival of species at the IUCN, declared that it is definitely the highest percentage of threatened animals, especially for an important group of mammals and even vertebrates. The Madagascar Group for the study and research on primates (Groupe d’études et de recherches sur les primates, Gerp) confirms this data by announcing that 105 species out of the 112 that populate the island are at serious risk of extinction.

These arboreal primates, recognizable because of their pointed snout and their long tail, can be found in Madagascar only. However, the level of exploitation and destruction of the tropical forest, unregulated agriculture and mining are damaging the lemurs’ environment and existence.

Meanwhile, Madagascar’s lemurs represent 20% of the primates on Earth. According to Christoph Schwitzer, head of the conservation of animals at the Bristol Zoological Society, among the most troubling factors of the extinction, there is also the “increase of lemur hunting, that includes commercial hunting on a large scale”, adding that such a situation has never been seen in Madagascar before.

Knowing the importance of lemurs for Madagascar and seeing all the problems our planet is facing already because of human indifference, OIPA International hopes that people will stop using these creatures for profit before it is too late.