OCTOPUS FARMING: ANOTHER STEP TOWARDS AN ENVIRONMENTAL CATASTROPHE

Animal farming is among the cruellest forms of animal abuse and exploitation. Those who consider themselves animal lovers should completely avoid eating and using animal ingredients.

Aquaculture is the farming of fish, crustaceans, molluscs, aquatic plants, algae and other organismsis and, although not much is said about it, that doesn’t make it less awful.

Among the million tonnes of molluscs, octopus farming is an emerging issue. 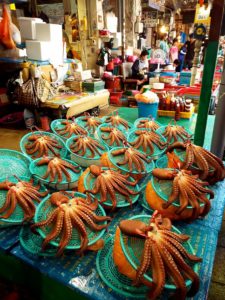 There are approximately 300 species of octopuses, more than 100 of which are captured in the wild. Since 2008, the reported annual catch of octopuses has been about 350,000 metric tons – but the actual number could be higher because catches are often underreported, particularly in artisanal fisheries. Two thirds of octopus catches come from Asia, and China alone accounts for more than one-third. The countries that eat most octopus are Korea, Japan, and Mediterranean countries like Spain, Portugal, Greece, and Italy. Demand is also growing in China, the US, and Australia.

Since the 1980s, consumer demand has grown to the point that the number of wild-caught octopuses has declined due to overfishing. Overfishing of octopuses, combined with the growing demand, is driving octopus’ prices up. As global demand for octopus grows, so have efforts to farm them.

To date, octopuses have been mainly caught in the wild due to challenges in hatching and raising them in artificial conditions. However, recently the possibility of farming is becoming more of a reality. Attempts to farm octopuses are underway in the Mediterranean, Asia, South America, Australia and the US. At the same time, trials of genetic modifications to accelerate their growth are more and more frequent.

Just like any other type of animal farming, that of octopuses is a cruel and immoral. Moreover, intensive aquafarming of octopuses will produce tremendous environmental impacts.

Among these, loss of natural habitat used for farms, spread of disease between escaped fish and wild varieties, interbreeding and nitrogen and phosphorus pollution released from faeces and food decomposition, contamination from fertilizers, algaecides, and excessive use of antibiotics.

However, the biggest environmental concern is the octopus diet. Unlike terrestrial farmed animals, the majority of which are herbivores, most farmed aquatic animal species are carnivorous and need fish protein and oil in their diet.

Octopuses need a lot of food, at least three times their body weight over their short lifetime (they only live for one or two years). Since the demand for octopuses is high, so will the demand for their live food. In a farmed setting, octopuses would rely on fishmeal and fish oil which would come from overfished stocks. Around one third of the global fish catch is currently turned into feed for other animals, half of which goes to aquaculture. Feeding farmed aquatic animals puts additional pressure on wild fish and invertebrates. 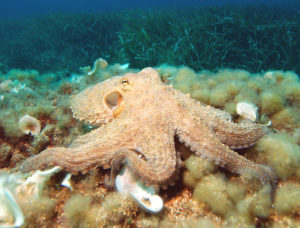 Until recently, aquatic animals were exempt from factory farming, and were almost exclusively harvested from their natural habitats. Intensive aquaculture spread in the latter half of the XX century and is now one of the fastest growing food industries.

The debate over farming octopuses is growing. A team of environmental scientists, philosophers and psychiatrists have written an essay in May 2019 on the impacts of octopus farming (“The Case Against Octopus Farming” in Issues in Science and Technology https://issues.org/the-case-against-octopus-farming/). They have argued that octopuses should never be farmed because of ethical and environmental reasons.

From our point of view, farming any kind of animal is an act of cruelty. The actual food system is both cruel to individual animals and environmentally unsustainable.