Human consumption of meat and dairy products is a major driver of climate change, despite this fact media and governments rarely take initiative to tackle climate change through food diet policies.

In 2006 the UN Agency FAO published a report about livestock impact on environment and climate, but the authors said clearly that the intempt was to change the production patterns and not to address any change in the consumer’s diet.

Greenhouse gas (GHG) emissions associated with meat production are estimated to account for over 14.5 per cent of the global total. This is more than the emissions produced from powering all the world’s road vehicles, trains, ships and aeroplanes combined. New technologies and changes in livestock production practices offer important means to reduce livestock emissions, but on their own cannot deliver the reductions needed to limit the rise in global temperatures to two degrees Celsius.

Individual and societal behavioural changes are essential to moderate consumption of meat and dairy products and therefore tackle climate changes, whereas changes in patterns production would be not enough. This in turn will require a greater level of public awareness and understanding of the links between diet and climate change, to both enable voluntary lifestyle changes and ensure acceptance of and responsiveness to government policies.

However, insufficient attention has been devoted to raising public awareness and preparing to shift societal behaviours, this issue infact is not mentioned by the media and neither by many NGOs, which, concerned to lose donors and supporters, do not take a streight position encouraging a vegan diet. Considering that many meat industries are giant stakeholders in the meat and food markets, it’s unlikely for them to support any change in the consumers diet which will lead to profit-losses.

Demand for animal products is rising fast. Currently, the biggest meat-consuming countries are China, the European Union, the United States and Brazil; major dairy consumers are China, India, the EU and the United States. Growth in meat consumption in China is projected to be over four times that of the next fastest-growing consumer, Brazil, in absolute terms.

Livestock production is the largest global source of methane (CH4 ) and nitrous oxide (N2O) – two particularly potent GHGs. The principal sources of N2O are manure and fertilizers used in the production of feed. The biggest source of CH4 is from enteric fermentation – a digestive process of ruminant livestock such as cattle, goats and sheep. Rising demand for livestock products therefore translates into rising emissions of CH4 and N2O. According to one study, if current dietary trends (increasing global consumption of animal products) were to continue, emissions of CH4 and N2O would more than double by 2055 from 1995 levels.

Livestock production is also an important driver of deforestation and associated carbon dioxide (CO2) emissions – both directly, as forests are cut down to provide pasture or are degraded through animal grazing, and indirectly, as rising demand for animal feed drives the expansion of cropland into forests.

Despite the scale and trajectory of emissions from the livestock sector, it attracts remarkably little policy attention at either the international or national level.

Of the 10 countries with the largest livestock populations, only two – Australia and the EU – remain subject to binding emissions reduction commitments under the Kyoto Protocol.

Mitigation plans have been largely industry-driven, with a number of national industries committing to reduction targets. For example, in Brazil, voluntary initiatives include a low-interest credit programme to promote sustainable intensification of cattle production and a multi-stakeholder coalition to develop bestpractice guidelines. The dearth of policies and funding to tackle livestock emissions stands in marked contrast to the abundance of government support afforded to meat and dairy producers.

Reduced consumption of meat and dairy products could potentially bring a number of other important social and environmental benefits, including the following.

The livestock sector is a major emitter of GHGs and its contribution to climate change is set to grow as global demand for animal products rises. Even with ambitious action to reduce the emissions intensity of livestock production, it is unlikely that global temperature rises can be kept below two degrees Celsius in the absence of a radical shift in meat and dairy consumption.

In order to tackle effectively climate change is important to raise public awareness on the link between meat consumption an green gas emissions. One of the problems is that the majority of consumers is not aware of this issue.

As consumers we are extremely powerful, because through our purchases we can direct and influence the productions. A simple step toward a change in our dietary habits is to introduce one free-meat day per week in our diet, it would be already a success to a reduction in meat consumption. 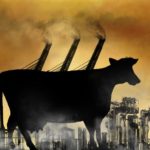