THE STORY OF AMIRA: BORN WITH A DEFORMITY TO HER HIND LEGS, SHE WAS THROWN OUT OF A CAR, THEN SAVED BY OIPA’S VOLUNTEERS IN ITALY. A KIND-HEARTED VET GAVE HER THE CHANCE TO WALK AGAIN 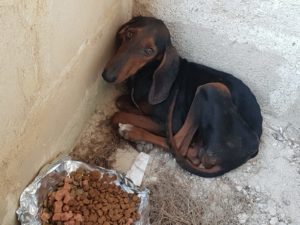 Amira is a female hound that was thrown out of a car when she was only seven months old. When she was found by OIPA’s volunteers in Italy she was dirty, skinny and suffered from dermatitis. The major problems were her hind legs, which were deformed and would not allow her to walk properly. The X-ray revealed that her kneecaps were dislocated and she needed surgery to be able to normally walk. She was born with a congenital condition which was not cured and resulted in her bones growing abnormally. Without the surgery, the deformities would have worsened, causing severe pain and movement impairment.

At the beginning of the new year, a miracle happened. A generous and

compassionate veterinary surgeon in Rome, specialized in orthopedics and neurosurgery, responded to OIPA’s volunteers’ call for help and offered to operate on Amira for free and keep her in his hospital throughout her recovery. Young Amira was therefore transferred to the veterinary clinic, where the vet operated on one of legs. A second surgery to her other hind leg will take place after she will fully recover. She will then be able to run towards a new life.

The support received by OIPA’s volunteers from the Italian community and the vets in Rome was priceless and allowed Amira, one of the many victims of abandonment, to gain new hope. All of those who took care of her wish to add a true happy ending to Amira’s story by finding a loving family that will cherish her forever.

Support the work of OIPA’s volunteers by making a donation