PARROTS: THE STRANGE HABIT OF THROWING FOOD AWAY 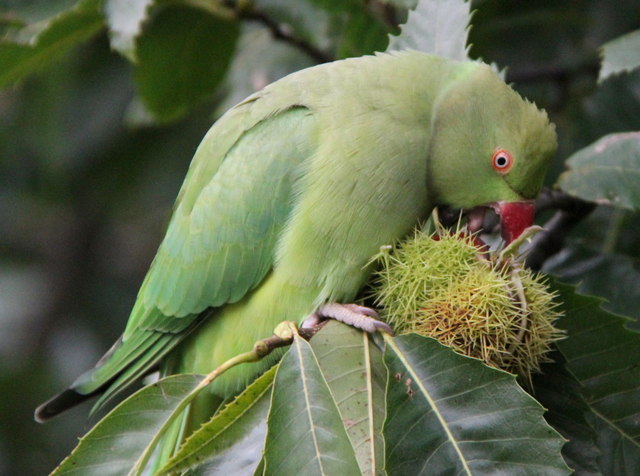 In animal kingdom, there is great competition for food. For this, the habit of parrots of eating only part of the food they have on hand while throwing away large quantities may seem strange. Not much is known about this behaviour; but a report recently published on the scientific magazine Nature has tried to identify the causes. 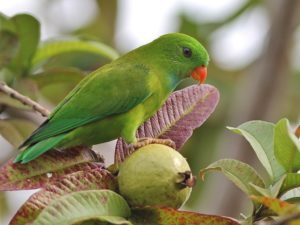 Wasting food is not a common habit among animals, even though it has been observed with a certain frequency in fruit-eating animals such as monkeys. However, no detailed survey on this particular behaviour had been carried out until now.

In this study, researchers focused on parrots, wondering whether if food wasting happened among all species and habitats and it was an accidental or voluntary behaviour.

It was found that food wasting is a widespread behaviour found in all the 103 studied parrot species, despite some differences among them and the period of the year. Wasting is more frequent during the non-breeding season, in exotic plant species and on unripe fruits or seeds.

The study emphasizes the important implications of food wasting for the species involved – not only parrots but also plants and other species that feed on wasted food – and for the functioning of the ecosystem in its whole. 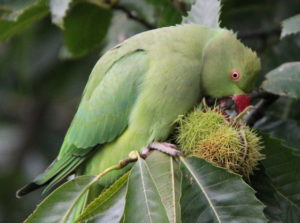 The study discovered that parrots have a much more important role for the conservation of the ecosystems than previously thought, especially in the light of the current scenario of the global change where forest recovery may depend on the efficiency of seed dispersal. Thus, parrots play their part in protecting the tropical habitats and therefore the conservation efforts for the environment should also be directed to parrots. Indeed, many parrot species are highly endangered with extinction.

It seems that this particular behaviour may benefit other species. Parrots act as seed-dispersers, pollinators or plant healers. Dropped fruits or seeds become available to ground dwelling animals that otherwise cannot benefit from them. Besides eating them, these species can also act as secondary dispersers.

The quantities of wasted food are quite large: in the wild, parrots wasted 11.8% of the fruits and 14.6% of the seeds that they handled; while the percentage of waste by parrots held in captivity was higher (21.2%).

Parrots waste less fruit and seeds during the non-breeding season; this is probably related to the higher nutritional requirements that individual have while raising chicks. 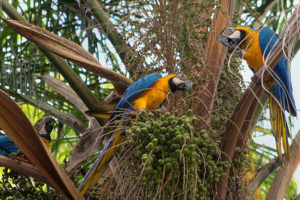 The habit of wasting food benefits smaller species, thanks to parrots’ ability to open hard fruits and leave them partially consumed and thus available for other species. They waste plenty of half-eaten fruits, reducing the original size or breaking hard fruit parts thus allowing their consumption by smaller size animals.

This report shows a nice but fundamental habit of parrots, amazing animals that play an altruistic role towards smaller animals, plants and the whole ecosystem.