SLEEPING DOG IS POURED MOLTEN TAR ON AND RAN OVER, SIGN A PETITION TO DEMAND PROSECUTION OF DEPLORABLE HUMANS RESPONSIBLE FOR HIS DEATH 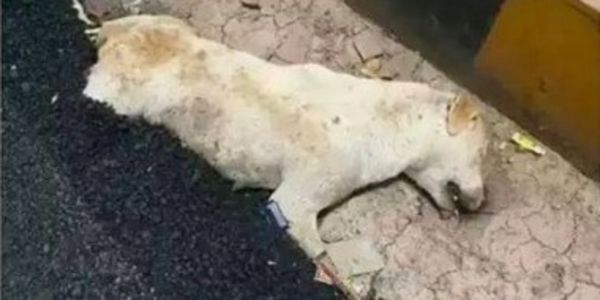 Unfortunately, cases of cruel treatment of animals are seen very often both on the Internet and in real life. Today, OIPA International is asking you to support a petition to urge Indian authorities to find and convict people who paved over a live dog in India. A case of extreme violence and cruelty that left animal lovers around the world with a broken heart and a strong determination to fight for justice, and for an innocent creature that died a painful death.

The horrific case happened in the northern town of Agra, in the Uttar Pradesh province of India, when people found a dead dog covered in dry tar. The reconstruction of events of this tragic night allowed to understand that during a road paving operation, construction workers came upon the sleepy dog. Instead of moving the sleeping puppy or coming back to finish the work later, the workers decided to simply pave over the innocent creature, previously pouring molten tar over it.

It is useless to mention that such a death must have been very painful and the animal suffered a lot before finally surrendering to death.

In their defense, workers claim that since the work was done at night, they did not see the dog, but witnesses say the workers heard the dog’s howls and still decided to ignore it.

Regardless of the extreme cruelty of this case, justice is still not achieved, as no one from the constructions company, RP Infrastructure Limited, has been charged.

Please, sign the petition and help Care2 achieve a fair ending of this episode of inhumane and deplorable treatment of innocent animals.

DIRECT LINK TO THE PETITON: https://www.thepetitionsite.com/it-it/547/067/315/these-men-poured-molten-tar-on-a-sleeping-dog-and-paved-over-it.-demand-justice/?TAP=1724 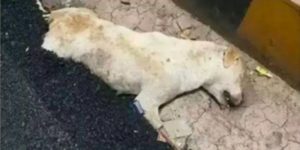