There is a new tourist attraction, Dolphinaris Arizona which opened for business on October 15 and is located in the desert near Scottsdale. Here, customers will pay hundreds of dollars to the attraction for the opportunity to swim with its three captive dolphins that were flown by FedEx from Hawaii to Arizona.

In late September, the nonprofit advocacy group, Animal Rights Hawaii, filmed a container holding the dolphins inside of a FedEx cargo warehouse at the Honolulu Airport. Based on the flight itinerary, the captive dolphins were likely stored inside of the shipping crate for at least 12 hours. Dolphin Quest, a swim-with-dolphins company with two locations, one in Hawaii and one in Bermuda, provided the Arizona Attraction with the dolphins.

“I’ve been with these animals since they were born,” Michelle Campbell, Dolphin Quest’s vice president of animals, told Hawaii News Now. “They’re second-generation dolphins under our care and no one cares more about them than we do.”

However, according to Alexis Thomas, who took the video footage of the dolphins says that they were showing signs of stress.

Dolphins are wildlife species, therefore they will be always distressed and mistreaten living in dolphinariums, read more here about dolphins free in their natural habitats, CLICK HERE. 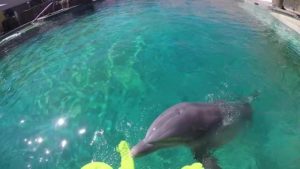 “The Dolphin Quest trainers were consoling the animal, who seemed to be in obvious distress, likely from the confinement of the box that it was in, of course, all of the noises that were happening, the fear of the unknown,” she told Hawaii News Now. On the flight to Arizona, the dolphins were likely “bombarded with foreign sounds, sensations, changing air pressure during flights and are known to vocalize and thrash out in fear,” Lisa Arnseth, co-founder of Dolphin Free Arizona said.

This scary experience of on-flight travel did not end upon their arrival in Arizona the next morning. The three captive dolphins are now forced to swim with tourists in the interactive “Dolphin Swim Experience” at Dolphinaris Arizona. 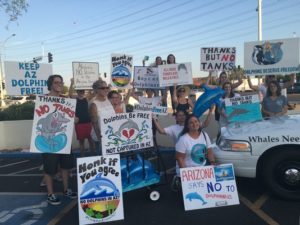 The Dolphinaris Arizona website claims to carry on education, conservation and research projects. OIPA beleives that keeping those animals in tanks, in captivity, forced to interact with humans for many hours and perform unnatural behaviours, has nothing to do with research, conservation and neither education.

OIPA promotes and supports conservation projects which study the animals leaving them free and not in captivity, and which create sanctuaries and protected areas for them.

This is the first Dolphinaris tourist attraction in the U.S. The attraction habitat reaches summer temperatures of up to 40 degrees celsius and although the Dolphinaris Arizona website claims that there is sufficient shade over the habitat, the desert sun beats over it which is unhealthy and unnatural for the animals. 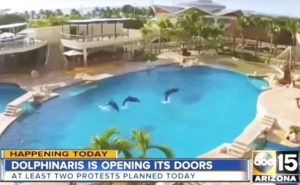 Additionally, allowing people to swim with dolphins has been proven to have a negative impact on these animals. According to the Whale and Dolphin Conservation, this is extremely stressful for the animals which caused behavioral abnormalities, illness, lowered resistance to disease and even death.

Once Dolphinaris Arizona had announced their plans to open their attraction in Scottsdale, animal lovers and organizations began to protest.

OIPA started an international appeal to Dolphinaris Company to protest against this new dolphinarium opening.

It is not acceptable that in 2016 is still possible to open facilities which exploit precious and protected animals with the only purpose of raising money, while covering their activities behind the education, conservation and research flag.

Dolphins belong to the oceans, not to the tanks of dolphinariums.