Over this June 2019, inside the South African context, the topic of the revision lion bone export quota has achieved extreme importance for the animalist sector. In particular, the Coalition To Stop the Captive Breeding and Keeping of Lions and Other Big Cats for Commercial Purposes, into which OIPA takes part, has represented the main protagonist of the revisionist action through the submission of an important Public Participation vis-à-vis the South African Department of Environment, Forestry and Fisheries.
The Coalition took this opportunity to provide information to be considered for the determination of the 2019 lion bone export quota. 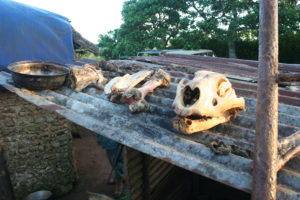 As described in the document, since 2008, more than 6,000 lion skeletons weighing a total of approximately 70 tonnes have been exported from South Africa to Southeast Asia (Williams et al., 2017a) for use in Asian traditional medicine practices (Williams et al., 2017b). Since 2017, the Department of Environmental Affairs (now Department of Environment, Forestry and Fisheries (DEFF)) has set a legal annual export quota of 800 lion skeletons, making South Africa the largest legal exporter of lion bones and skeletons.
According to Coalition, the setting of this legal lion bone quota lacks a sound scientific basis and is driven solely by the economic principle of supply and demand. In addition, the quota has been presented as a science-based consideration with a so-called public participation process based on scientific expert opinion and scientific peer-reviewed publications only, thus excluding the views and values of South Africa’s wider citizenry.

In this context, the DEFF has effectively facilitated the growth of the industry through enabling provinces to issue permits for lion breeding, canned hunting and more recently bone exports. This would lead to the perception of the South African lion bone trade to be a by-product of the trophy hunting industry whereas, many facilities exist purely to supply the Southeast Asian bone trade. Confirming this view, it has been found that about one-third of the facilities breed and keep lions for the trade of bones and other lion products exporting the vast majority of exported lion skeletons (98%) to Laos and Vietnam. 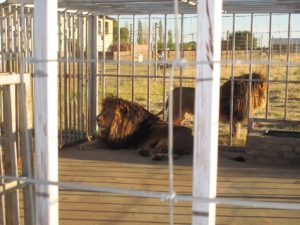 It can be asserted that the captive lion breeding industry and substitute lion bone trade has been legitimised through an interpretation of Section 24 of the Constitution of the Republic of South Africa by DEFF, referred to as the aggregative approach.

Notwithstanding that in 2016 the IUCN World Conservation Congress issued a Motion (No. 009) urging the Government of South Africa to “terminate the practice of breeding lions in captivity for the purpose of ‘canned shooting’ through a structured, time-bound process” and to “restrict captive breeding of lions to registered zoos or registered facilities whose documented mandate is as a recognised, registered conservation project.”, the captive lion breeding industry is currently legal.

The action of the Coalition is designed to achieve a zero quota. This latter is deemed dangerous by the Scientific Authority scared by the fact that this industry is led by the Asian demand for lion bones favouring the creating of a spike in poaching of wild animals. Furthermore, research is also indicating that Asian consumers are open to sustainable non-animal alternatives.

Although the call for public participation relates specifically to the 2019 lion bone export quota, the mission of the Coalition concerns also the captive lion breeding industry in its totality. In addition, the importance of the issue remains in its much wider implications as long as it will inevitably impact on current and future lions in captivity, as well as wild animal populations in South Africa, regionally and globally. Hence, the quota should be reduced to zero in order to avoid any further potential harmful effects. Moreover, the Coalition supports also the involvement of the public in the decision making believing that it has a right to comment in general on the proposal to set the lion bone quota.

OIPA KENYA LAUNCHES A NEW A...

NEW PROGRAMME FOR THE SAFEG...

JUSTICE FOR MUM ELEPHANT AN...