South Korea which is located in the southern half of the Korean Peninsular of east Asia will this July to early August host its annual dog meat-eating festival commonly known as “Bok Day”, “Bok Days” or the Malbok Festival. The festival normally begins on the 13th July or 21st July, and runs into early August which is considered the hottest days of the year within the country.

It’s during this event that South Korean dog and cat meat markets will begin a mass slaughter of dogs and cats. One particularly commonly killed dog is the “Nureongi” a yellowish traditional dog breed that has been bred to specifications over time within East Asia.

Sambok or the dog days of summer, covers a month of time at the peak of the growing season and traditional time that to some South Koreans is classified as a traditional time to cool off and extract some medicinal healing powers from the consumption of dog meat. In reality there still remains no proof or medical evidence that supports the East Asian pet meat consuming beliefs that such meats increase human health.

During the festival dogs will be seen roasted and served on a spit, and prepared in stews too.

Despite laws that have been drafted into place to halt such abuse, dog and cat meat traders will this July into early August beat, blowtorch, hang and inhumanely kill countless dogs and cats. Back in 2007 the south Korean government made history by making “An act of killing in a cruel way such as hanging” and “an act of killing in an open area such as on the street or in front of other animals of the same kind watching” are explicitly prohibited until Article 7 (1) of the Animal Protection Act of 2007. Unfortunately the laws apply to abuse rather than prohibiting the trade full stop.

Updates to the policy from 2008 can be briefly read below. The policy is believed to have been brought into practice back in 1991

Animals under protection should be free from the following (Article 3 Animal Protection);

Animal Welfare Act Plan should be updated every 5 years and local governments shall cooperate with the central government. 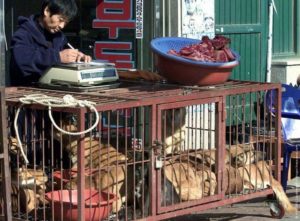 Estimated statistics on consumption and ownership:

SEND A LETTER TO THE KOREAN AUTHORITIES ASKING TO STOP THIS ABUSES! CLICK HERE