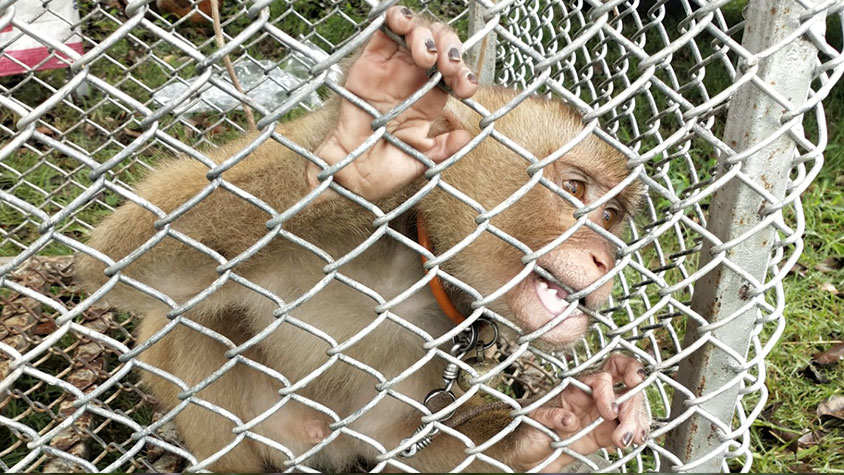 In some regions of Thailand, pig-tailed macaques are intentionally bred and abusively trained, often with severe punishments, to harvest coconuts for the export industry. These coconuts are then purchased from food companies and used to produce coconut milk, oil and other products that we daily consume unconsciously.

Monkeys are snatched from the wild, abducted from their families and their natural habitat. Most of them are illegally captured when they are just babies, and trained to pick up to 1,000 coconuts a day as they are treated like “coconut-picking machines”.

The poor captive monkeys are always tethered by the neck with a rigid metal collar or kept chained and forced to climb up and down trees to collect coconuts that are not even permitted to eat. They are exploited until their labour is no longer useful to the industry.

After being captured, they endure extremely cruel training. There are facilities, real “monkey training schools” as revealed from a disturbing investigation of PETA Asia, where the animals are trained to pick up fruit. In addition, the trainers of those farms to earn more money forced monkeys to perform, like in a circus, frustrating and difficult tasks such as ride bikes, play basketball, coconut picking competitions and other tricks just to entertain paying tourists.

Monkeys are also chained to old tyres or confined in cages that are barely large enough for them to turn around in, while others are left in locked cages on the back of a truck with no shelter from the bad weather.

This cruel situation of abuse caused frustration to monkeys that deprived from freedom, possibility of movement, motivations, proactivity and socialization displayed stereotypic behaviours as indication of extreme stress. They slowly lose their mind driven to desperation and start to frantically shake the cage bars, scream desperately trying to escape and circle endlessly on the dirty ground in which they are confined.

Handlers are used to pull out the canine teeth of the poor animals to avoid the possibility of being bitten from them in case they would try to defend themselves against abuse and exploitation.

Now, that we all know this terrible truth we should stop to feed this terrible industry. We should stop purchasing coconuts and related products from farms and major producers that use monkey labour and put an end to the abuse of those animals.

Other Countries such as Brazil, Colombia and Hawaii use mechanical or humane methods to harvest coconuts without exploiting and abusing any living being.

Sign the petition to end to the abuse of monkeys in the Thai coconut industry: http://chng.it/w7vZhjCc 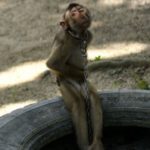 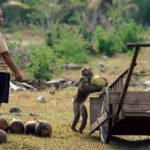 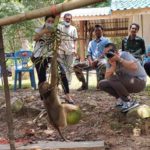 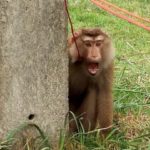 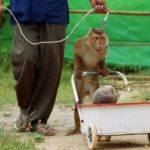 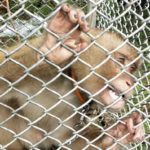 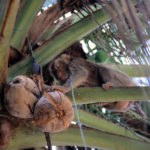 A macaque picks coconuts from a treetop on Thailand’s Samui Island. Captive monkeys are trained to help harvest coconuts on the island’s plantations.