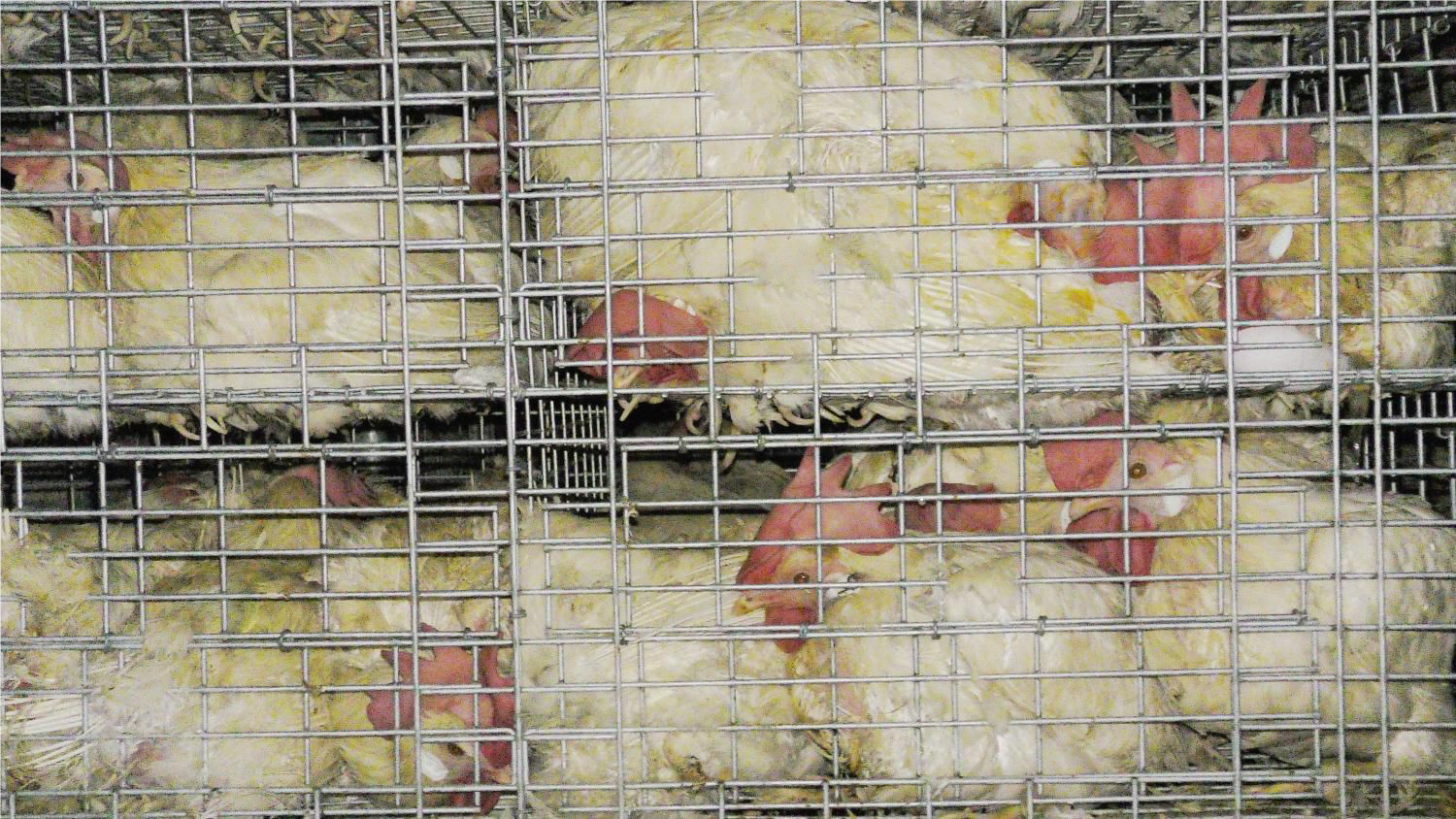 2018 World Cup in Russia has recently ended, causing the death of an awful lot of stray dogs, in silence of mass media and FIFA. Animal rights organizations fought a losing fight against this meaningless slaughter.

Now is the time to take action in preparation of 2020 Olympic Games that will take place in Japan.

We were asked by our member league ARCJ Animal Rights Center Japan to disseminate information and promote their petition to stop cruelty at the Tokyo Olympics and Paralympics.

Below we provide an extract from “Tokyo Animal Cruelty – the aim to preserve Standards of Animal Welfare at the Tokyo Olympics” released by ARCJ Animal Rights Centre Japan.

SIGN THE PETITION LAUNCHED BY ANIMAL RIGHTS CENTER JAPAN NOW! DO NOT DOWNGRADE ANIMAL WELFARE AT THE TOKYO OLYMPICS AND PARALYMPICS

Thanks to London 2012 Olympic Games aiming for sustainability, it was regarded as important to integrate the Animal welfare into Olympics and Paralympics. Farm animal welfare have already been accepted in European countries, and in 2012 the EU was abolishing the battery cage. Prior to the EU, U.K. has already banned battery cages, and other directives on farm animal welfare were enforced.

Rio Olympics 2016 also incorporated Animal Welfare, which did not produce the same results as the U.K. However, the idea of protecting the rainforests to maintain sustainability included by the Brazilian government can be considered a huge improvement.

While the London and Rio Olympics showed consideration for the welfare of animals, the Tokyo Olympics appear to be a very different story. In their desire to produce meat, eggs, and milk to be consumed at the upcoming games, the Tokyo Organizing Committee of the Olympic and Paralympic Games is seeking to greatly reduce the standards of treatment and husbandry of farmed animals.

This is mainly due to the low level of awareness on livestock farming conditions among the population. According to statistics, their attitude would greatly change once they learn about the reality of farm animals.

92% of egg-laying chicken farms in Japan use battery cage. More than 99% of eggs in Japan are from battery cage farms. The space per hen on these farms is only 444.7cm2 on average, smaller than the chickens themselves. Being tightly packed, they squash other birds when they reposition themselves.

When the egg-laying rate of hens decreases, they are considered chickens to be culled. All of a sudden, grabbed by their legs or wings, these chickens are yanked out of their cage and thrown into a container at a speed of six birds every 10 seconds. These containers are stacked up and transported to a slaughterhouse by long-haul truck. 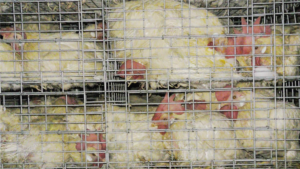 Chickens are of low priority at slaughterhouses. Even when they arrive at a slaughterhouse in the morning, they are often left out until the next morning, crammed in containers without getting slaughtered on the day of arrival. The birds in lower containers get covered in faeces and broken eggs falling from the upper levels. Many of the poultry slaughterhouses in Japan do not use the stunning method. Birds are shackled upside down and have their throats cut while they are fully conscious. Chickens have excellent cognitive capabilities. They are aware of what is going on while being hung up by their legs and unable to flee and they struggle due to the pain of having their throats cut. It takes at least 90 seconds from when their throats are cut until death, during which they struggle and experience excruciating pain. Although the scalding procedure is supposed to be done after chickens have been killed, 2015 data shows that 136,798 egg-laying chickens were boiled alive in Japan.

Compared with the rearing density in EU countries, the rearing density in Japan is 1.4 times higher on average (46.68 kg/m2), with a maximum of 1.78 times (58.99 kg/m2). In Japan, 16 to 22 chickens with an average weight of 2.94kg are crammed into a space of 1m2. The maximum rearing density is regulated to be 33kg/m2 in the EU. According to research conducted on 11 farms in Brazil, the average rearing density was 28.5kg/m2. While left out packed in containers at night, wild animals often attack chickens by sticking their legs and mouths inside through small openings and bite off the birds’ legs and heads. The chickens that are attacked are found dying or even already dead the next morning. 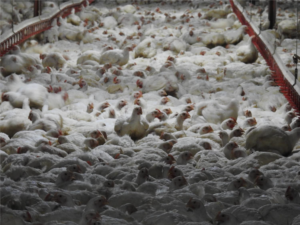 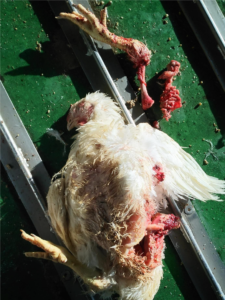 88.6% of pig farms in Japan operate on the gestation crate confinement method, which has been largely abandoned worldwide due to its cruelty. The ratio of these kind of farms is still increasing and hundreds of millions of yen is still allotted as public subsidies for facility investment in gestation crates. Although there are farms that raise pigs in a group, if only temporarily, 60.7% of farms set no period for pigs to be raised this way. Pigs on these farms are never able to interact with other pigs, except when they are piglets, and are kept alone in confinement. There is no sign that the number of farms using the gestation crate confinement method will decrease in Japan. Since no meat processing companies have declared that they would eliminate gestation crates, consumers cannot choose gestation-crate-free pork in Japan. 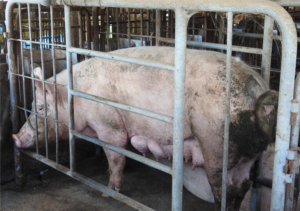 94.6% of pig farms in Japan conduct castration on male pigs without anaesthesia. It is commonly believed that pigs feel less pain if they are castrated when they are still small ̶ an argument that has no scientific ground. 19.8% of pig farms in Japan do not provide enough space for pigs to lie down. The number of farms with high breeding densities is growing. When pigs are transported to the slaughterhouse, it is common for pig handlers to abuse them with stun guns, to kick and punch them in their faces and other parts of the body, to walk on them, and so forth. 86.4% of pig slaughterhouses in Japan do not provide water drinkers for pigs. Pigs cannot drink water up to 27 hours after arriving at the slaughterhouse.

Dairy and beef cattle in Japan 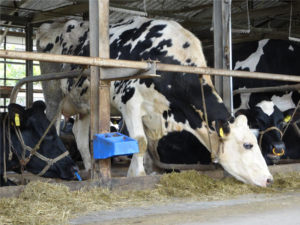 Marbled wagyu beef is considered good beef in Japan. To produce marbled meat, the condition where fat and muscle intermingle, producers restrict cows’ vitamin A intake. Restricting vitamin A intake can cause gait abnormalities, weakening of eyesight, blindness, night blindness, arthritis, loss of appetite, and hydrops. When transported to the slaughterhouse, it is common for handlers to abuse cows by pulling and twisting their tails, by kicking them in the stomach, and so forth. 50.4% of cattle slaughterhouses in Japan do not provide water drinkers, thus cows cannot drink water up to 24 hours after arriving at the slaughterhouse.