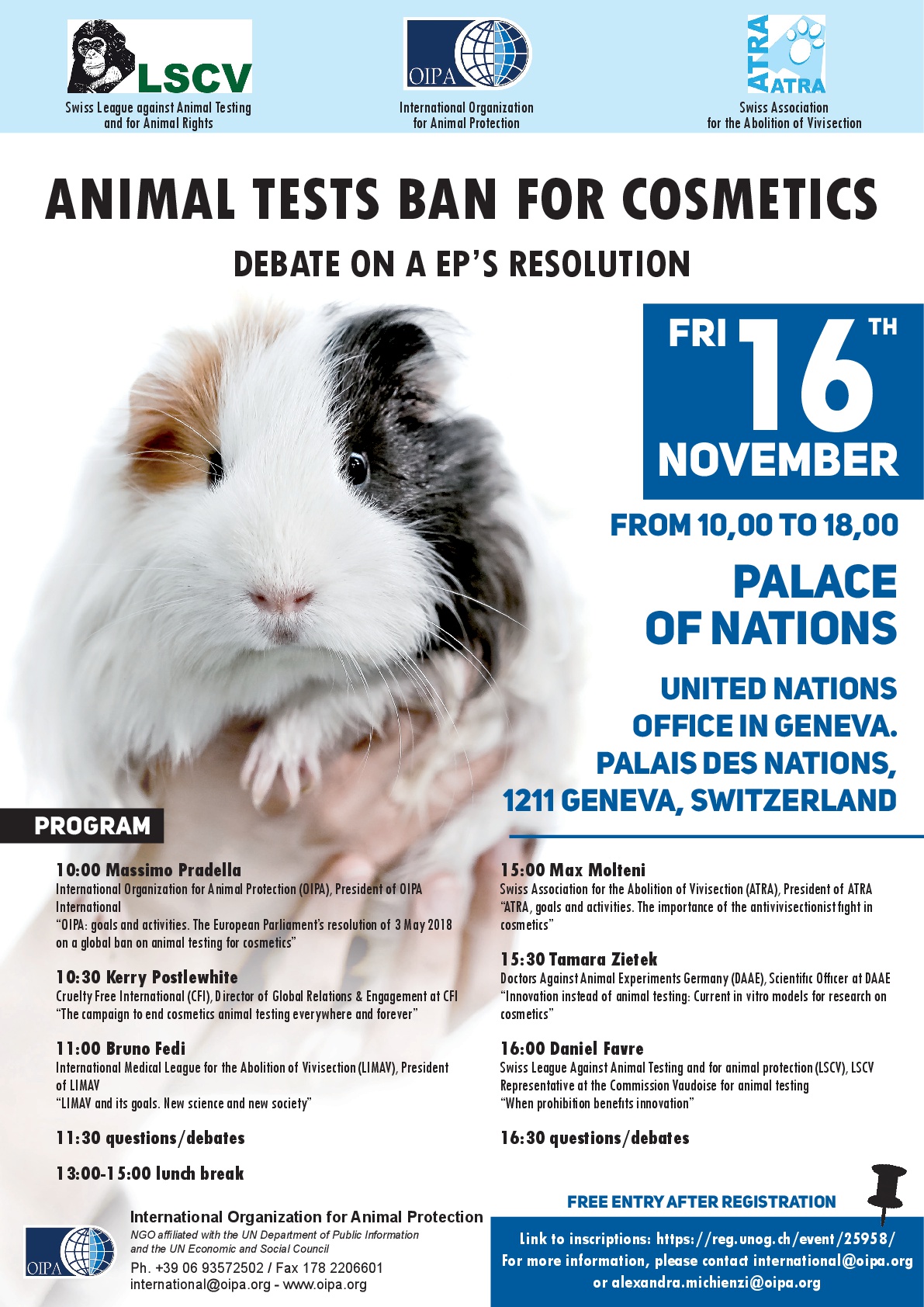 Target 2023: The European Parliament is pushing for a global ban on testing cosmetics on animals

With a non-binding resolution adopted by 620 votes in favour, 14 against and 18 abstentions,MEPs call on the European Union to launch a diplomatic campaign for a worldwide ban on testing cosmetics on animals by 2023.

Animal testing for cosmetics is already banned in the EU and now MEPs want the ban extended to the rest of the world.

On 16 November a conference will be held at the United Nations office in Geneva, organized by OIPA, LSCV (Swiss League Against Animal Testing and for animal protection) and ATRA (Swiss Association for the Abolition of Vivisection) under the topic “Animal Tests Ban for Cosmetics: Debate on a EP’s Resolution”. Many issues will be discussed during this meeting, among which the current situation for animal tests and the search for strategies to end cosmetics animal testing globally. CLICK HERE TO SIGN UP AND PARTICIPATE

The protection and welfare of animals is something that can be achieved through diplomacy too.

On 3 May, the European Parliament called for the EU to advocate a global ban “on animal testing for cosmetics and on international trade in cosmetic ingredients and products tested on animals”, and invited EU leaders to “use their diplomatic networks to build a coalition and to launch an international convention within the UN framework” in order to ban all animal testing for cosmetics before 2023.

However, this worldwide operation turns out not to be so easy: around 80% of countries worldwide still allow animal testing and the marketing of cosmetics tested on animals, including large producers such as China.

However, even Europe cannot be considered a safe place for lab rats. This is why the initiative also seeks to improve the effectiveness of the ban within the EU. In fact, MEPs note that there are loopholes in the EU system, as some cosmetic products are tested on animals outside the EU before being re-tested in the EU using alternative methods and placed on the EU market. They also point out another serious problem: most ingredients in cosmetic products are also used in many other products, such as pharmaceuticals, detergents or foods, and may therefore have been tested on animals under different laws.

The data collected since the entry into force of the EU ban in 2013 demonstrates that the ban has not prevented the EU cosmetics industry from thriving and providing around two million jobs, and being the world’s largest market in this sector. In short, MEPs say that, looking at the figures, these products can remain safe for our health while not causing falls of production and preserving the animals’ welfare.

Moreover, it has been demonstrated that Europeans care deeply about animal welfare. According to the Special Eurobarometer survey of March 2016 on Attitudes of Europeans towards animal welfare, 89% of EU citizens agree that the EU should do more to promote a greater awareness of the importance of animal welfare internationally and that it is important to establish high animal welfare standards recognized worldwide.

On 16 November 2018 the United Nations office in Geneva will host a conference organized by OIPA, LSCV and ATRA that will bring together experts in the field. This meeting aims at promoting practical strategies for a worldwide ban on animal testing in view of the future convention that the United Nations will, it is hoped, propose for subscription to non-UE states too.

For those interested in participating at the conference organized by OIPA, LSCV and ATRA “Animal Tests Ban for Cosmetics: Debate on a EP’s Resolution”, please sign up through the following link https://reg.unog.ch/event/25958/.

Animal testing for cosmetics is prohibited in the Union since March 2009, a deadline that was extended to March 2013 for the most complex tests, such as repeated-dose systemic toxicity, skin sensitisation, carcinogenicity, reproductive toxicity and toxicokinetics, regardless of the availability of alternative non-animal tests.

Together with other animal rights associations, in 2012 OIPA launched the European citizens’ initiative “Stop Vivisection”, urging the European Commission to abrogate the directive 2010/63/EU on the protection of animals used for scientific purposes and put forward a new proposal that would put an end animal testing.

“Stop Vivisection” gave European citizens the right to say NO to animal testing and called for more advanced scientific methods protecting both human and animal wellbeing. More than 1.700.000 citizens signed the petition. Despite the Commission’s failure to take on board the recommendations made by signatory citizens, there have been some improvements in the legislation in the following years.

The barbaric and unjustifiable practice of testing cosmetics on animals has to stop!