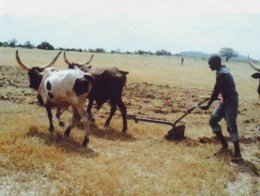 Unfortunately, but realistically, animal cruelty still happens almost every day in Cameroon. Once again we must sadly inform about cases of farm animals mistreatment. Recently in Cameroon some of our OIPA volunteers, during a survey trip in the Far North Region, came across a handful of cases of animals’ ill-treatment, perpetrated in particularly cruel way. Not surprisingly, we could actually see with our own eyes how often the animals here are subjected to much suffering and pain in the name of utilization for life sustaining activities.

The animals are mostly used for ploughing of agricultural fields or for carrying of heavy cargo in the day-to-day activities of humans, as you can see in the pictures.

From investigation of OIPA Cameroon, these animals could work up to 10 hours a day, mostly forced to do so by their owners beyond their natural abilities. Worst of all, their owners do not give them enough fodder, water and rest to make up for the amount of energy lost during the work.

As you know, nowadays ploughing of fields (especially vast fields) for agriculture is mostly done by machines because it’s a very difficult task that requires both force and efficiency. The animals used for these kind of jobs are then subjected to excessive physical strain, just because they need to replace the machinery.

One of the most famous animal rights philosophers of Australian origin, Peter Singer said: “The time has come after the liberation of slaves in the name of anti racism, to liberate animals in the name of antispecism”. This is to say that animals in Cameroon are treated exactly like slaves because they are tied with ropes, beaten with sticks and forced to work much more than they can.

As if the ploughing of fields for agriculture is not enough, animals in this part of the country are also subjected to other difficult tasks such as transportation of goods. Here almost every form of transportation of goods is commonly done by cattle and donkeys. No matter the weight of the goods, the owners of the animals comfortably use theme to transport their goods from fields to markets. Sometimes, the animals trek about 20 kilometers to reach such destinations, with very little fodder, water and rest. The animals carry very heavy loads, such as bags of rice, corn, millet, sorghum or groundnuts, and even clay pots or other artisanal items over long distances.

It should be noted that this area of Cameroon is located in the Sahel region, which is characterized by extreme arid and hot climate: so you can imagine what the animals here go through especially in terms of food, water and temperature regulation.

Doubtless, something has to be done to protect the rights of these animals.

Support OIPA to educate animal owners in the far North of Cameroon and give these animal a better life. 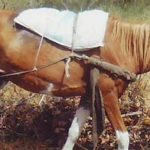 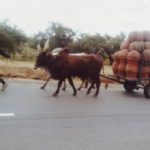 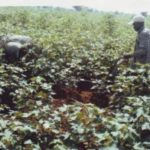