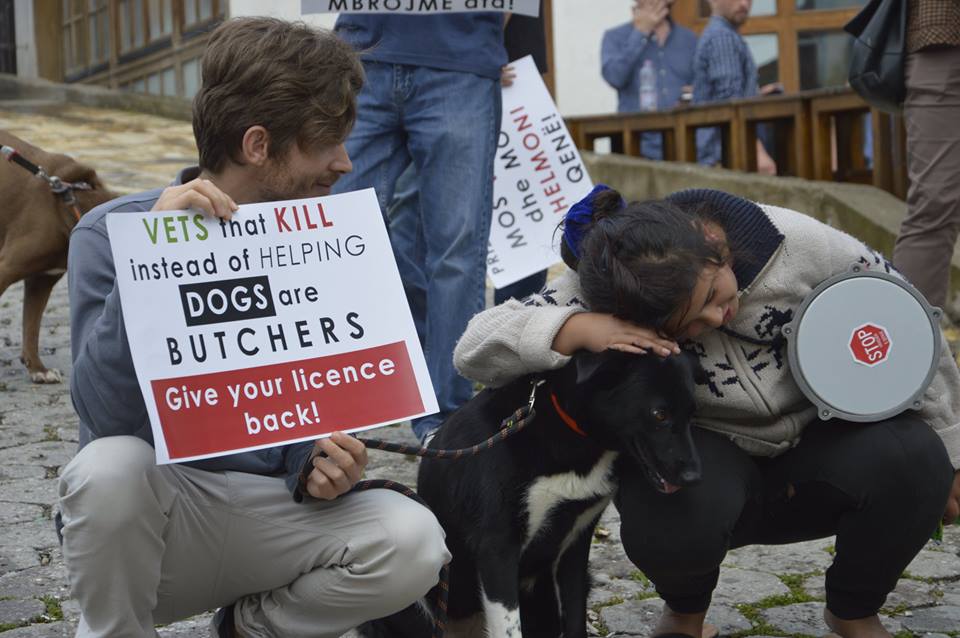 On the 16th of June, the Mayor of Tirana Erion Veliaj attended a film festival in Prizren, Kosovo.

As a reminder against dog killings in Ko 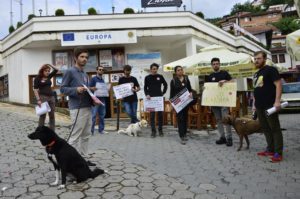 sovo and Albania, animal rights activists hold a symbolic gathering in front of the cinema. Protesters wore black for mourning.

Through this protest, organized by Animal Rights Foundation, activists urge the mayors of Tirana and Prizren to stop murdering street dogs and to implement an effective and humane program to control stray dogs in their respective cities and countries.

What is the current situation in Kosovo and Albania?

KOSOVO – In autumn 2016, the government of Kosovo planed a new regulation to euthanize all stray dogs. Such decision gave rise to protests from animal rights associations. StrayCoCo lobbied hard in the Kosovar institutions and at the end of February 2018, the Government finally decided to start a national CNVR program with the financial contribution of EUR 1.3 Mio by the Parliament. 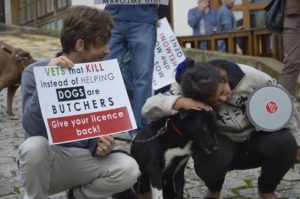 It sounded like victory. However, the killings are continuing. Dogs are being poisoned and killed. It is clear that veterinarians do whatever they want. Moreover, a large number of them does not have the necessary skills.

ALBANIA – Read the full article and sign the petition addressed to the mayor of Tirana Erion Veliaj against mass killings of stray dogs in his city launched twenty days ago by OIPA International.

CNVR PROGRAMS – THE ONLY VIABLE SOLUTION

Many countries choose to adopt, as solution for the stray dogs issue, massive killing campaigns, by shooting or poisoning or euthanizing the dogs.

Besides being inhumane, massive killing campaigns are totally useless: There are more unwanted strays than ever in places that continue with this counter-productive approach. If strays are removed permanently from an area, there is a vacuum – another set of animals will simply move in. CNVR breaks this cycle. This  approach is being used globally with success.

Mass killing of stray dogs is an expensive operation (munitions, weapons, veterinarians, collection and discharge of dead dogs have a high cost) and it is not a long lasting solution as it is impossible to kill the entire stray dog population of a city or country. Killing or catching and putting animals into shelters has merely a temporary effect.

The only viable solution to keep under control the number of stray dogs is a large-scale CNVR campaign. CNVR is a quick and efficient way to manage community dogs. The basic idea of a CNVR programme is to catch or collect the dogs, sterilize them, treat them if needed and after recovery, return them to the same place where they were caught. In this way the number of animals decreases slowly at the rate of natural mortality.