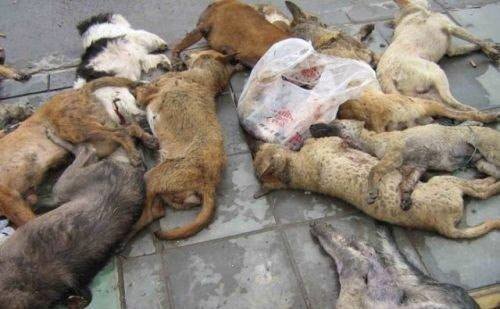 OIPA Member League Stray Coco, from Kosovo, started an appeal in order to stop the mass killing of stray dogs.

It is time to report the daily dog killing practice in Kosovo. StrayCoCo need international support to protest against this cruel dog treatment. As you maybe have noted, last year 831 dogs were killed only in Prizren. While the association is negotiating with the responsible veterinarians that won the tender of Prizren this year, the killing goes on in different other cities. The Hunting Society of Kline has killed during the last few weeks 460 dogs in Klina. Pristhina is preparing a tender for dog killing. Stray Coco assumes that dogs are killed in Ferizaj, but cannot prove it yet.

Just last year 831 stray dogs were killed in Prizren by veterinarians, and in many other Kosovarian towns and villages stray dogs were and are decimated in a cruel way silently.
Two days ago Stray Coco were informed that the Mayor Sokol Bashota ordered the shooting of all stray dogs in Klina by the Hunter Society Dukagjini.
Most dogs are not aggressive and live out their lives in relative peace with their human neighbors.
The real problem with the dogs is the high birth rates which reproduce up to 10-14 puppies a year. The problem multiplies, but the the shooting of stray dogs traumatizes the citizens and sends the wrong message to the youth in Kosovo. Scientifically proven is the fact, that the only way to manage stray dog population is CNVR (Catch, neuter, vaccinate, release).
460 dogs are already killed in Klina, 290 stray dogs will be killed in the next few days, if there is no international support against this practice.

Stray Coco asks the government of Kosovo and their Prime Minister Isa Mustafa or President Hashim Thaçi to stop the barbaric shooting of dogs immediately. If Kosovo wants to develop into a thriving economy and enjoy full EU membership it must stop killing dogs and implement effective humane stray dog control.

This treatment of stray dogs must become public. There is the petition on change.org about Pristina and the news from Kline.

Stray Coco is the only animal protection organization for stray dogs in whole Kosovo. You find only some activists in Prishtina that complain about the dog treatment in this country, but seem helpless. They are treating the stray dogs against rabies, DHPPL and worms (echinococcus) as well as mange, before they spay/neuter them and release them as soon as possible in their territory.

The reason they started their work there, and their vets were this year for the first time in Shkodra/Albania, is the really cruel treatment of dogs in both countries. They are tied to a stick in some field or in an empty house and left there to starve, without water and food, until dead. Besides that the intentional killing with cars is a daily practice, specially puppies have no chance to survive. And veterinarians kill dogs when asked by the state! 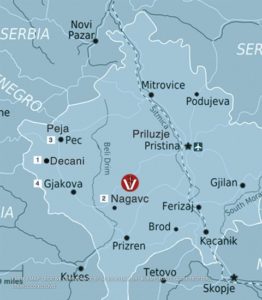 Their organization started officially its work in march 2015, and their aim is the education of the citizens to prevent puppy birth as well as sicknesses spread by dogs that are not cared for. They see that puppies are treated cruelly specially by children, that puppies die most of the time of Parvovirus, and prevention of puppy birth is for us a priority. As they are a small foundation, we cannot be everywhere, but work in West Kosovo with their main partners, the Pro Vet Klinika in Nagavc, and their two veterinarians DVM Blendi Bejdoni (Kosovarian) and DVM Eriola Palla (Albanian), both studied veterinary medicine in Tirana. They had until this May a cooperation with the Mayor in Peja, Gazmend Muhaxheri, and there is an ongoing CNVR Program financed mostly by the town Gjakova and accomplished by our cooperating vets. They are now active in Decani and are trying to get more influence in Prizren, where 831 dogs were killed last year by veterinarians (specialized for large animals) in Suhareka. They do not judge but try constantly to discuss other, humane treatment, with those veterinarians, that should remember their veterinary oath. Slowly they have some success in convincing some of them to treat dogs instead to kill them.

As under the management of Blendi Bejdoni their work is progressing in West Kosovo, their vets are visiting Mayors, talking to them about their program, going to teach in schools and so on, they are very worried about the development in the eastern part of Kosovo and in Albania! In Ferizaj they will kill the dogs or started already. They have not the power to finance more Castration programs at the moment. Gijlan, Mitrovica and other municipalities have too many stray dogs and citizens complain. What is happening in the villages is out of control, but it is clear, puppy killing is a daily business and suspend a farmers dog as soon as he is not needed anymore in a city or in a field to starve is normal.

In Tirana actually they 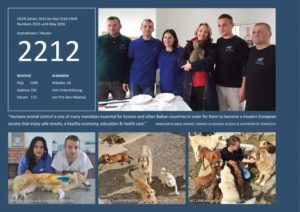 pay turkish vets for CNVR – officially – Stray Coco veterinarians wanted to visit their clinic and where not admitted! They cannot prove it, but are sure, that the dogs are killed. Citizens report, that they miss „their“ Stray dog in front of their house!

Stray Coco try to change mentality towards dogs by teaching school children and posting on Facebook for adults and vets.

SUPPORT THEIR WORK WITH A DONATION AND VISIT THEIR WEB SITE: