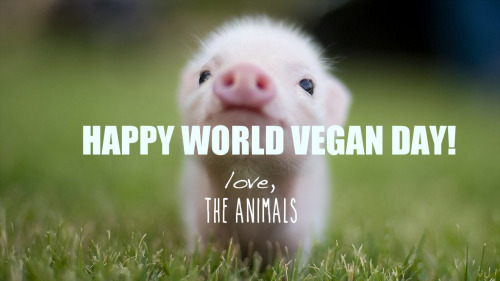 World Vegan Day is an annual event, celebrated all over the world by vegans on the first day of November.

However, why is it celebrated on this day?
We have to go back in time… Until the II World War. In August 1944, in the United Kingdom, Donald Watson and Elsie Shrigley (the two co-founder of the vegan movement) were part of the Vegetarian Society, the most ancient English organization. Since long time, the two had decided to exclude from their daily diet the consumption of any animal-derived products. Anyway, the Vegetarian Society did not authorize them to differentiate their lifestyle: this prohibition was the base that pushes Watson and Shrigley to establish, along with 23 other members, the Vegan Society.

The term chosen to identify this new organization was long debated. In November 1944, Watson organized a meeting between six non-dairy-consumer vegetarians, in which was adopted the term “VEGAN”, as a contraction of vegetarian. In an interview, released by Donald Watson on 11th of August 2004, the first president of the Vegan Society has stated: «I invited my early readers to suggest a more concise word to replace non-dairy vegetarian. Some bizarre suggestions were made like dairyban, vitan, benevore, sanivore, beaumangeur, and etcetera. I settled for my own word, vegan, containing the first three and last two letters of vegetarian — the beginning and end of vegetarian. The word was accepted by the Oxford English Dictionary and no one has tried to improve it».

When the society was registered as a charitable institution in 1979, the constitutive Act and the Statute brought this definition: “… a philosophy and lifestyle which tries to exclude, as far as possible and practicable, all the forms of exploitation and cruelty against animals, whether used as a source of food, clothing or any other purposes and, as an extension, it promotes the development and use of alternative methods that do not imply animals for the for the good of man, animals and the environment. In food terms, this implies the exclusion of all the products derived, wholly or partially, from animals”.

Already here, in the beginning of the veganism, in its manifesto, is possible to glimpse the answer to many provocative questions (such as «If you are really a vegan, you should not use the car or the plane or the train… you should not move at all. Every step you take, you unknowingly kill lots of insects!» or «If you are really a vegan you should not breathe! You know how many living beings floats in the air? If you breathe them, they die!»): as far as possible and practicable. I know… I mean, if someone asks questions like these, the first thing we ALL think of is absolutely not: «Yes, but you have to consider the vegan manifesto…», but a more trenchant: «Why don’t you go f…ind yourself something more productive?».

But, returning to the original question: why is it celebrated on this day?             The event was established in 1994 by Louise Wallis, then Chair of The Vegan Society in the United Kingdom, to commemorate the 50th anniversary of the founding of the organisation and the coining of the terms vegan and veganism.
Speaking in 2011, Louise Wallis said: «We knew the Society had been founded in November 1944 but didn’t know the exact date, so I decided to go for 1 November». According to Donald Watson (as he said in the 2004 interview), this decision was made without thinking that in the Christian calendar the first of November is the day which commemorates All Saints…

Therefore, I bring it as the sign of fate: vegans are really saints. And who dares to contradict, looking whom we deal with every single day? Yeah, I mean those who asks questions like the ones above!