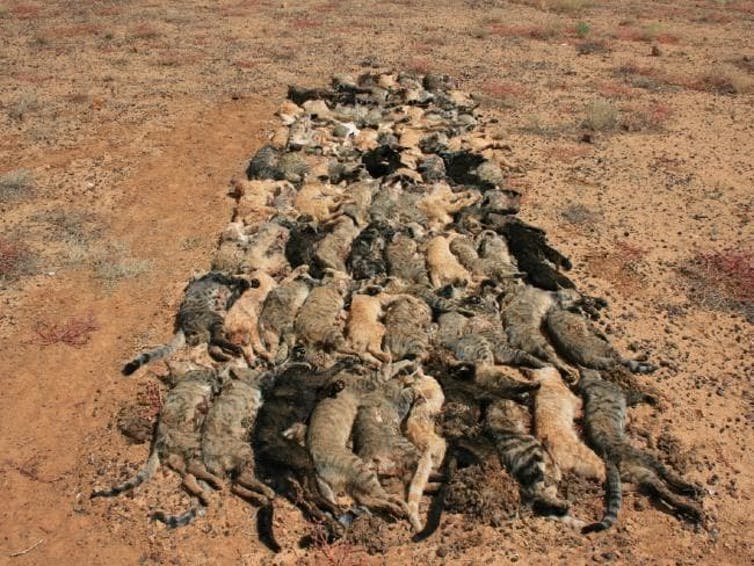 Let’s begin by saying that cats are not indigenous to Australia and they did not ask to come to the continent. It is thought they first entered the country at some point between the 17th and the 18th century, introduced by European settlers that were used to trap rats onboard their ships. Their presence in the island is therefore “man-made”.

The number of cats has ballooned since then, the total population ranging between 2 to 6 million today.

The Australian government considers feral cats as a biodiversity and environmental catastrophe. Why?

Feral cats roam freely in the wild, where they live on hunting. For them, native species are easy prey and for that, they are blamed for threatening and decimating native animal populations.

In 2015, the Australian government announced its plan to cull the population of feral cats in the country in an effort to save threatened and endangered native species. 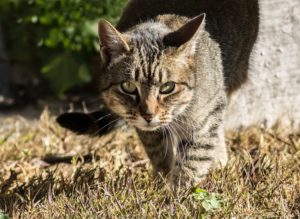 The “Threatened Species Strategy” released by the Australian government in 2015 states that: “The scientific evidence is unequivocal that feral cats are one of the greatest threats to Australia’s land-based mammals. They have been a major contributor to the extinction of at least 27 mammals since they were first introduced to Australia. Today, they imperil at least 142 species or more than one third of our threatened mammals, reptiles, frogs and birds”. The war on cats encases therefore the “highest priority”.

The document identifies a set of actions, amongst which are:

– The development and deployment of Curiosity, the new humane feral cat bait;

The government policy to save the animals that Australians love and define them as a nation is resulting to a mass feral cat cull, a true slaughter.

However, officials should understand that the merely killing of cats does not necessarily contribute to the protection of biodiversity. A more holistic approach is needed. The government is focusing heavily on damage caused by feral cats, but at the same time leaving aside more important but politically sensitive issues like habitat loss caused by urban expansion, logging and mining.

The plan to cull the population of feral cats, started in 2015 in an effort to save threatened and endangered native species, is recently becoming particularly shocking. 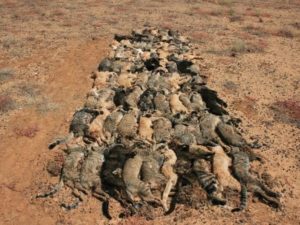 Indeed, cats are now being tortured and killed with deadly food. Poison sausages are dropped from airplanes (aerial baiting) or tossed into areas with high concentrations of stray cats by hand (ground baiting).

Eradicat (the name of poison sausages) is a registered trademark of the Western Australian government and was invented by David Algar, a scientist nicknamed Doctor Death. The sausages are laced with 1080, that is sodium monofluoroacetate. This poison occurs naturally in gastrolobium pea plants and is also produced synthetically. The recipe also includes kangaroo meat, chicken fat, and flavourings to entice feral cats. Australia’s native animals evolved alongside these kind of peas and they are therefore tolerant to the poison. The same doesn’t apply to non-native animals, such as cats, for which it is lethal.

In addition to poison bait, the government is using also other tools in its controversial mission to eradicate the feline population. Since the declaration of war to feral cats, the government has pledged $5 million to support community groups who can target cats on the front line.

As a consequence, trapping and shooting cats has become commonplace in Australia. In an area of Queensland, there is a council that offers a $ 10 bounty per feral cat scalp. In other areas, detector dogs are used to track down cats that are then shot.