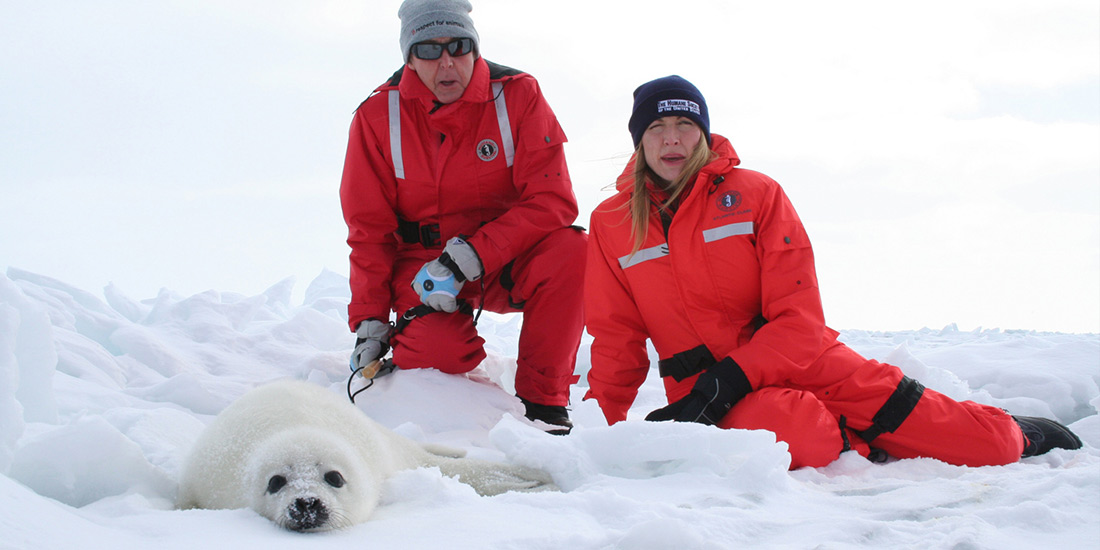 ST. JOHN’S, NEWFOUNDLAND – A coalition of organizations including the Franz Weber Foundation, The Humane Society of the United States/Humane Society International and Respect for Animals, brought members of the international media and a Member of the European Parliament to observe the commercial seal hunt in the Front this week. In the face of violent mobs and blockades as well as unlawful denial of permits to observers by the Canadian government, independent journalists were able to film the commercial seal hunt in the Front for the first time in more than two decades.
“The illegal and violent actions by seal hunt supporters this year have exposed the depths to which the sealing industry and Canadian government are prepared to sink to defend the indefensible,” stated Rebecca Aldworth, director of Canadian wildlife issues for The Humane Society of the United States.
“Angry crowds used violent tactics to try to stop us from leaving for the hunt area,” said Vera Weber, coordinator of the Franz Weber Foundation. “The local police did nothing to prevent this. Having witnessed firsthand the way that the Canadian government colludes with this corrupt industry, I can only compare it to a banana republic. I travel extensively around the world in my work and this is the first time I have ever witnessed anything like this – Canada should be ashamed.”
In Blanc Sablon, observers were held hostage by a crowd measuring in excess of 80 people. Vehicles attempting to depart for nearby helicopters were followed, and one was rammed by a local truck and forced off the road—endangering the lives of the journalists inside.
“British people are horrified by what is happening in Canada,” said Nicki Brooks, director of Respect for Animals. “The British government has already stated its opposition to the hunt, and its intent to explore a ban of seal products.”
“My conclusion from being here over the past week is that the sealers and the Canadian government obviously have something to hide since they go to such great lengths to bar observation of the hunt,” said Carl Schlyter, a Swedish Member of the European Parliament. “The only logical solution is for us to take initiatives at the European level and follow the example of Belgium and Italy who have already banned all seal products.”
“Some of the most important media outlets in the world witnessed the seal hunt this year, as well as the actions of the Canadian government to hide the sealing industry,” said Mark Glover, UK director of Humane Society International. “In Britain and around the world, Canada’s international reputation is being severely and irreparably damaged by the continuation of this brutal slaughter.”
The footage that was obtained of the seal hunt in the Front shows clear violations of the Marine Mammal Regulations that govern the hunt, including sealers shooting seals, then clubbing them, and finally stabbing them with hooks and dragging them across the ice – all without checking to ensure the animals are dead.
Last year, when the first baby seal was killed on the ice, The Humane Society of the United States and a powerful network of animal protection groups representing tens of millions of people around the world declared a global boycott of Canadian seafood products. More than 400 seafood wholesalers, restaurants and grocery stores, and 280,000 individuals are taking part in the boycott, and values of Canadian seafood exports to the United States have already declined by ten times the value of the seal hunt.
“The actions of the sealers and the Canadian government have backfired, and have simply increased global support for the campaign to save the seals,” said Aldworth. “Our campaign is gaining momentum around the world, and it is our intention to ensure this is the last baby seal slaughter we will ever have to witness.”