RODEOS IN CHILE: A TRADITIONAL FORM OF CRUELTY TO ANIMALS 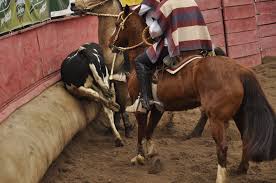 In Chile, rodeo is considered as a national sport, as well as an important cultural tradition.

It mainly consists in pinning a cow up against a padded wall.

The horsemen are called ‘HUASOS’. They work in pairs and try to score points by pinning a calf (‘NOVILLO’) up against a padded section of the arena’s wall. Depending on how well the cow is pinned and other manoeuvring of it determines how many points each pair of huasos receives or looses.

Rodeo season usually starts on September 18, the Chilean national day. Over the following 6 months, regional competitions are held, whose winners will then participate to the national championship that take place in Rancagua at the beginning of April.

Rodeo is maybe one of Chile’s national sports. It was recognized as sports discipline in the 1960s, with its own regulations. There are now very specific rules on cattle breeds that can be used for the competition and requirements for horsemen’s participation (including the traditional dress they have to wear).

Many consider rodeo a quaint Chilean custom, a historic practice; while those who care about animals see rodeo as an expression of cruelty, and nothing more. A defenceless calf is caused severe pain, stress and harm. Can this be considered a sport??

There have been many protests from Chilean animal rights activists in the last period. They stressed that a bill currently being discussed envisages a reform of the legislation on animal protection. In particular, they ask for an amendment of the law 20.380 on Animal Protection. The proposal was submitted by Deputy Félix González, with the support of the NGO Animal Libre.

Article 16 of the above mentioned law states that “the provision of this law shall not apply to sports that involve animals, such as rodeo, bullfight, and equestrian sports, which shall be governed by their own regulations”. 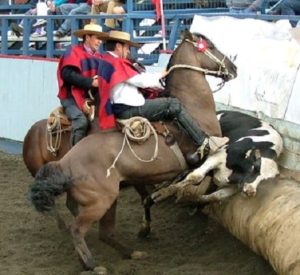 According to the supporters of this initiative, this limitation of the scope of the law prevents the sanctioning of acts of severe mistreatment against animals. Therefore, they ask for the application of the provisions of the law to all those activities that foresee the use of animals.

5 reasons to call for an end of rodeos

This is the most powerful reason why many people ask for the definite ending of rodeos. Calves suffer sharp blows that provoke bruises, breakings, internal bleeding and sometimes death. Horses, as well as calves, are exposed to the risk of severe damage to health.

2-A lack of rules

As already mentioned, the Chilean law on Animal Protection does not apply to Equestrian sports. Therefore, this kind of animals is poorly protected by rules.

3-Not a show for families

When they go to see a rodeo event, children and young people are exposed to horrific scenes of animal abuse that might be the cause of psychological problems. Some studies have suggested that watching violent behaviour makes them predisposed to reiterate this type of acts.

In other words, we are creating future abusers.

4-It is an activity for elites

Throughout its history, the rodeo has been deeply connected to the wealthiest rural classes. Indeed, a great deal of money is involved in rodeos; participating to regional and national competitions is incredibly expensive. Rodeo is an outdated and sectarian practice that casts a shadow over its nature of national sport.

5-Animals are not items of entertainment; and animal cruelty is not an expression of a national identity

Rodeo is still upheld in the name of tradition. However, a free and developed society cannot find justification to such a bloody tradition.

Electrocution, solid blows, psychological and physical exhaustion: this is what calves suffer before and during competitions.

TORTURING A DEFENCELESS ANIMAL SHOULD NEVER BE CELEBRATED AS TRADITION.