Shocking and barbaric practices are common in animal experimentation for productive purposes.

However, the livestock sector has rea 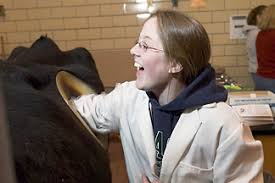 lly gone too far this time.

Known as cannulated or fistulated cows, the animals are fitted with a porthole device to gain access to their stomach. A 15 cm hole makes it possible to the employees to have permanent access to the cows’ stomach and deposit food samples or take them out. The aim of this practice is to study their digestive process and perfect the most efficient form of feeding so that cows can produce as much milk as possible. In short, to enhance productivity in the sector. 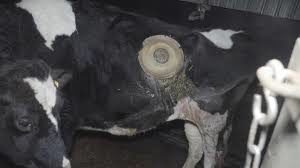 The animal rights association L214 released a video footage this past June, showing cows fitted with “portholes” to allow access to their stomachs. The investigation has raised the ire of many, upset by the cruelty of the practice.

Cows are reduced to the rank of productive machines. They must be profitable, no matter the ethics!

This practice is quite common is Switzerland, where two farms boast of experimenting with this technique to improve productive animals’ nutrition: the Agroscope in Changins and in Posieux. This procedure is legal in the Helvetic Confederation for over 35 years, and several dozen cows are part of this kind of experiment.

Productivity race is, once again, at the expense of animals. 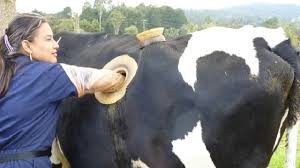 At a time when consciousness and sensibility of the animals are unanimously recognised by the scientific community (see the Cambridge Declaration on Consciousness, 2012), mutilations cannot be justified on the pretext of productivity. Animal husbandry is an aberration that consists in producing unacceptable genetic modifications, mutilations and pains. OIPA member league ATRA (Swiss Association for the Abolition of Vivisection) calls for an immediate end to cannulation in Switzerland!!

Being vegetarian is not enough. Animals in farms suffer every single day. They are exploited, denied their freedom and subjected to repeated experiments.