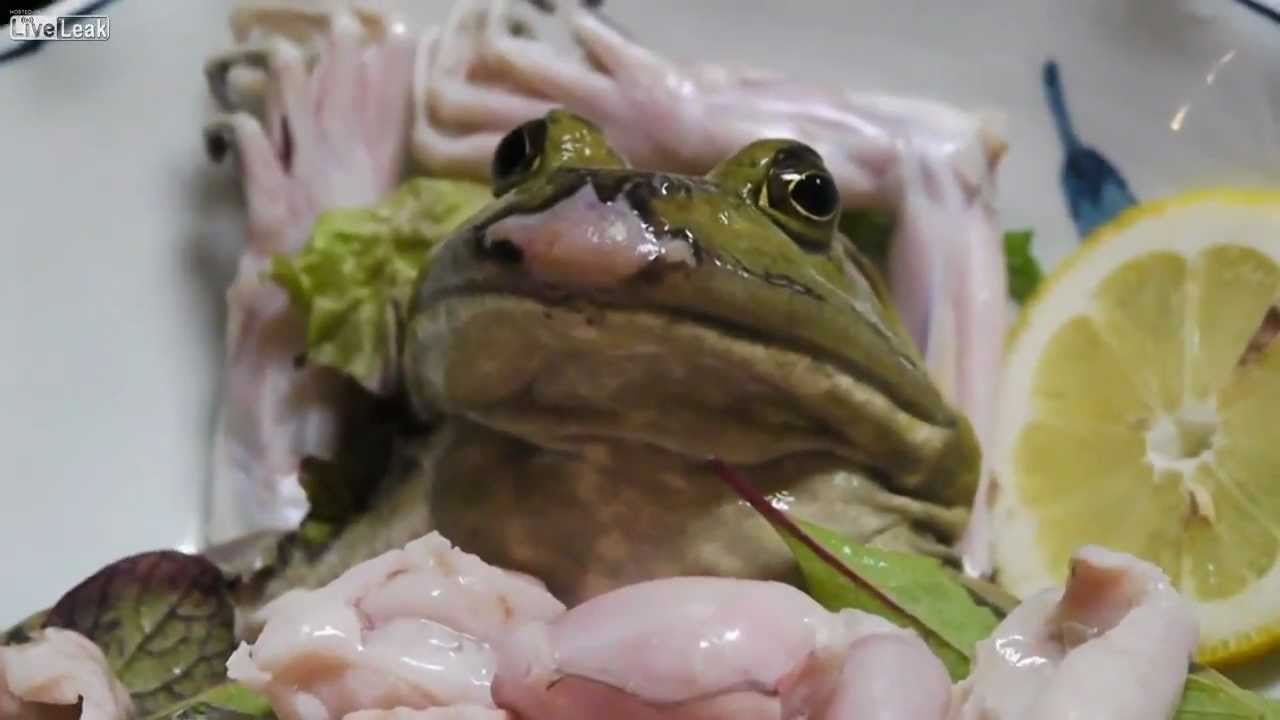 Unfortunately in 2016 animals are still abused and mistreaten in various ways all over the world, but this case is not only unrespectful for animals but for the LIFE itself!

In Japan and in Asia eating raw animals is pretty common, but eating animals while they are still alive is an outrage! Recently a viral video on the web give popularity to the Frog sashimi practice, which means to eat the frog on the plate cut in a half while the animal is basically still dying and still alive.

The Japanese are known for their obsession with super-fresh food, but this YouTube video of a young Japanese woman enjoying a dish of live frog sashimi while it wriggles around on the plate shows something truly wrong.

The video, which was originally posted in 2012, is shot at Tokyo’s Asadachi restaurant, a place that specializes in bizarre food and special sashimi that goes beyond fish (think horse, chicken — and in this case, bullfrog.)

In the video, a large frog is stabbed, skinned, gutted and served up on an iced plate with a lemon slice and soy sauce. Though the frog is killed instantly by the chef’s knife, it takes a few agonizing minutes for the frog to stop moving. In those moments, you see the creature’s eyes blinking back at the camera while maudlin music plays in the background, and at points the frog flails its arms and flops around on the dish, while its heart is still beating.

But this is not the only brutal practice, OIPA Member League JAVA Japan, make clear that even high-class Japanese restaurants and well-known Japanese hotels serve various types of dishes which include animals cruelly killed. For example a dish called “Ikizukuri of Fish” – makes sashimi (cut a fish) while its mouth or gills are still moving and serves it on a plate. Another example is “Odorigui” or eating abalone that is cooked over the wire gauge. The abalone cooked over the wire gauge writhes to free himself from the heat.

The abalone looks like it is dancing (Odori means dance in Japanese) and people enjoy looking at it suffering and enjoy eating it. A dish using a Chinese soft-shell turtle is expensive. It is believed the dish give physical strength. A Chinese soft-shell turtle’s head is cut and is rinsed in front of the guests. They eat the meat and even drink its blood.

In Japan there is the Animal Welfare Act but only mammals, birds and reptiles are subjects protected by the Act. Frogs and amphibian species are not covered by the Act. In Japan there are prohibited matters and obligations from a hygienic perspective in regard to killing animals for food. However, for the animal protection there are only guidelines which do not include prohibitions or obligations. Moreover, the guideline covers only mammals and birds.

This is not just about promoting a vegan diet, this is about respecting the creature that just lost its life to feed us.

OIPA International starts an appeal to the Japanese Government asking to stop this cruel and brutal practices and to show more respect to all living creatures in the planet.