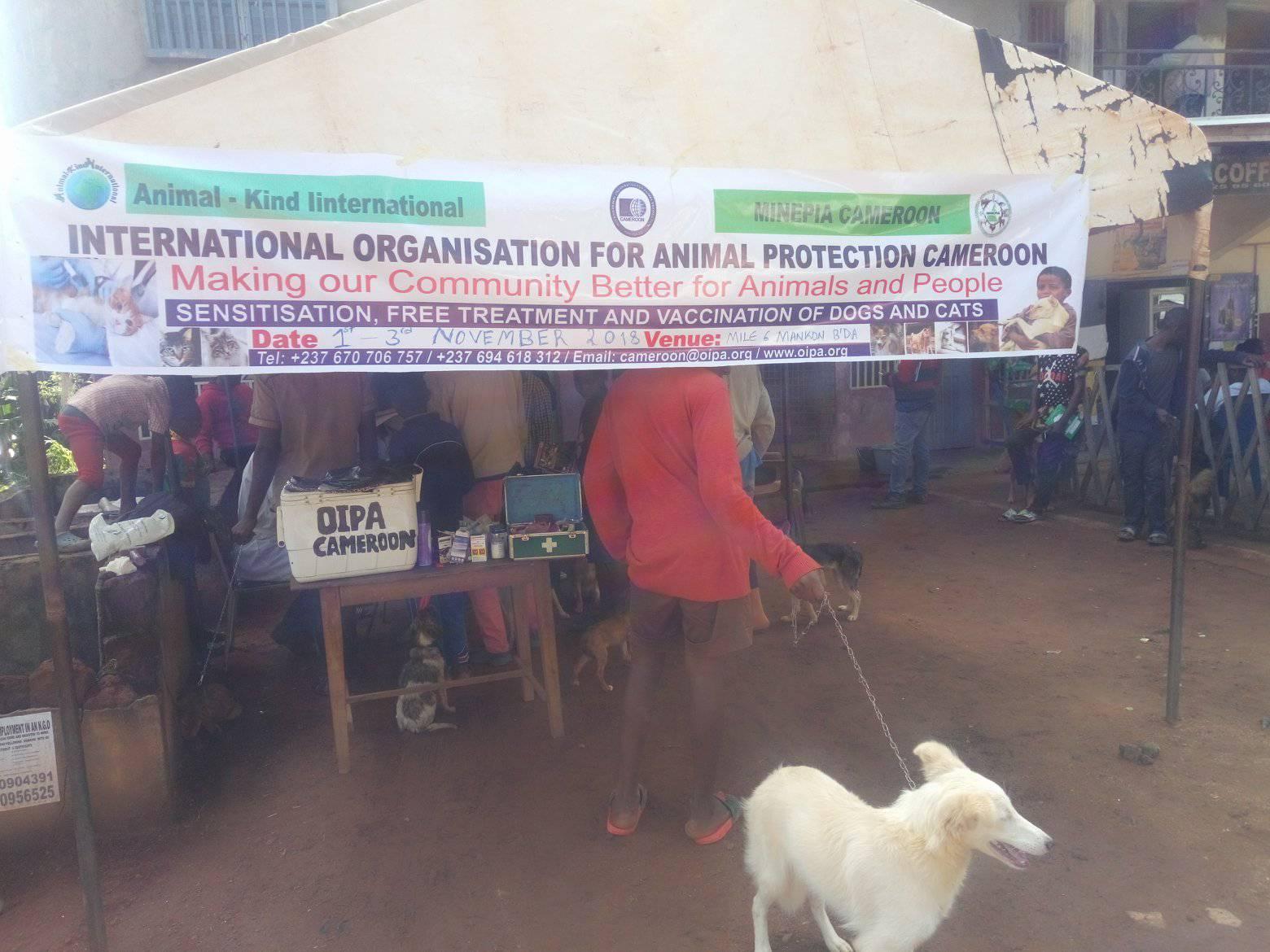 1-3 November 2018 – SENSIBILIZATION, FREE TREATMENT AND VACCINATION OF DOGS AND CATS IN CAMEROON

Canine rabies is endemic in most African countries and the risk of human rabies is estimated to be high in Cameroon according to WHO estimations. In the bid to control the disease, many approaches have been tried. Of these, wide-scale vaccination of dogs has proven the most effective and of impact. In fact, only regular vaccinations of dogs protect people and animals against life-threatening rabies infections in the long term. By creating a more stable and healthier dog population, we lay the groundwork for impressive future rabies-combating results. 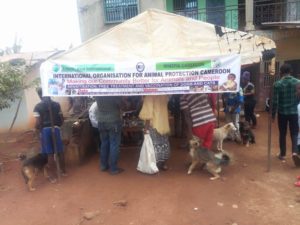 From 1 to 3 November, OIPA Cameroon volunteers implemented a rabies and distemper vaccine program at Mile 6 Makon, North West region, an area where the population is still unaware of the vital importance of vaccinations for dogs against rabies and distemper.

The campaign, carried out under the theme “Making Our Community Better for Animals and People”, aimed at educating the community and especially dogs owners on animal care and protection. This program benefited cats and dogs as well as pet owners as it enhanced their knowledge and relationships with their animals. 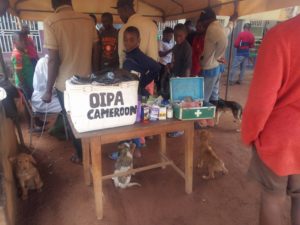 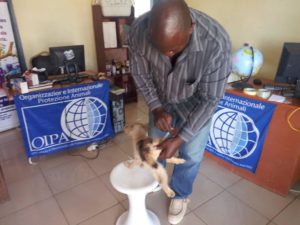 Given the broad-spectrum advert about the project, many anxious pet owners crowded up the OIPA office, even before 1 November, with their pets to be treated. Both stray and owned dogs in the community are living without basic medical care. They suffer from fleas, ticks, worms, mange and are susceptible to fatal diseases such as rabies, parvo and distemper.

The project started with a community awareness campaign aimed at improving public health and safety by reducing the incidence of rabies/ dog bite injuries and raising empathy and kindness towards street dogs. In fact, the community is still uninformed and uneducated about animal health and behavior; most are fearful to even approach free roaming dogs or kindly treat them because of the fear of getting rabies.

OIPA volunteers met with the village councils, schools, community and religious groups. Materials such as banners, flyers and posters were disseminated among the community and on the vaccination point to better inform the population on the importance of this campaign. Announcements and talks were made in churches and gatherings to this effect.

On day two, sensitization continued as OIPA volunteers were dispatched to carry a door-to-door campaign  to  further  explain  to population about the treatment and vaccination program, its  importance to animals and  how it will benefit not just the animals but also pets owners and the whole community. 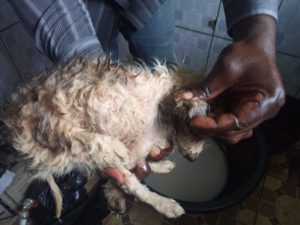 Animal owners’ response has been overwhelming. Many of them thanked the team for finding time to educate them and promised  to improve the condition of dogs feeding them on daily bases.

The bad news is that, OIPA volunteers discovered over 27 stray dog in need of medical attention. Unfortunately, given the scarce resources at its disposal, OIPA Cameroon team could not be able to help them. After retiring from the field, a meeting was held at OIPA head office involving the team and the veterinary personnel from the Ministry of Livestock, Fisheries and Animal Industries (MINEPIA) in a bid to come up with a plan on how to conduct the mass treatment and vaccination project of dogs and cats scheduled for the 3rd November 2018. 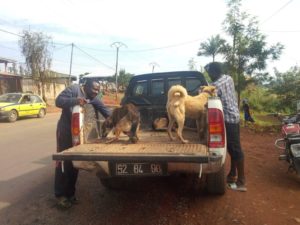 Besides the community sensitization campaign, another vital component of the project was vaccination of both owned and stray dogs. On day three, a static point vaccination team stationed at mile 6 Mankon was ready to ensure the treating and vaccination of cats and dogs.

The day started early in the morning with a massive and amazing turn out. It was at that moment OIPA volunteers realized that power of education and how ignorance has led to suffering of many dogs in rural communities. The team registered every dog upon arrival for follow up and collected basic information such as the owners name, contact, location, pet name, breed and coat. They further interviewed owners on the health conditions, feeding habits and general welfare of pets.

Under the strict supervision of OIPA’s country representative Mr. Che Gilbert and a representative from the Ministry of Live Stock Fisheries and Animal Industries, the vets Mr. Simanmu Ivo Nocha and Mr Sam Njela dipped the dogs in sterilized water to wash off ectoparasites. It was observed that most pets suffered from bacterial infections, worm infestation, lack of appetite, ectoparasites and anemia. Nearly all the dogs have fleas and ticks and many have worms and other illnesses. The washing was then followed by intramuscular administration of antibiotics. Cats and dogs have also been dewormed. 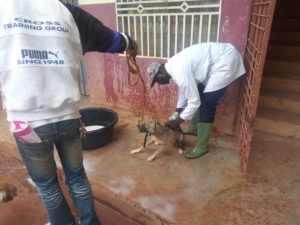 Some dogs had wounds on the ears, eyes and legs while others looked pale and ill. Drugs such as penstrep, ivermecten, multivitamin, deditech, dexamethasone, vitaflash, sundexa, sulphadimidine, Kepro and iron were respectively administered to the affected pets.

These activities went on and on as more pet owners approached the treatment point with their pets, and applauded the initiative to free our communities from common canine and feline diseases. Cats were only vaccinated and a certificate of vaccination/ treatment was issued to owners. Records of the vaccination program were compiled by the team, so that it will be easy to follow up at a later stage. Finally, at 4:30PM the treatment came to an end with a refreshment offered by OIPA Country representative. 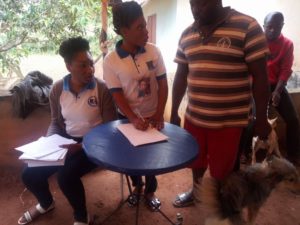 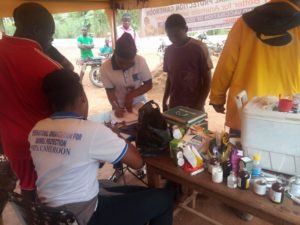 With your donations, this project will be able to continue to improve the lives of animals and people. OIPA team had done something very good for the community and potentially saved the lives of people, children and dogs from a terrible disease. Again, thanks a lot, AKI Animal Kind International! 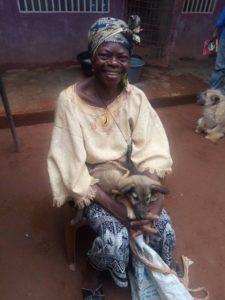 OIPA Cameroon’s goal is to create a safe, healthy, caring and rabies-free community for both humans and dogs.

Make a donation to OIPA Cameroon!!!