BULLS OF FIRE: A BARBARIC TRADITION BRINGS SHAME ON SPAIN 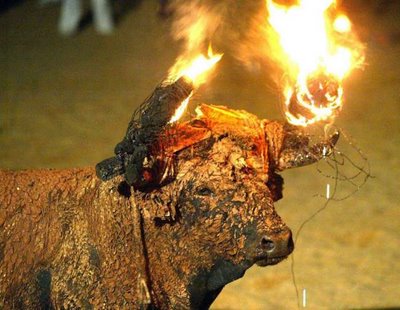 Bulls of fire is an extremely barbaric Spanish tradition.

Iron rods are tied to bulls’ horns and then set on fire, looking like live torches or firework machines – all for the entertainment of the crowd. 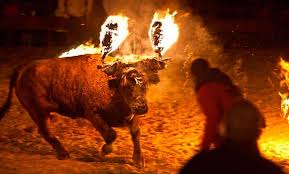 This atrocious physical and mental torture, considered as a “tradition” takes the name of ‘Toro Jubilo’ or ‘Bou Embolat’ and is still practiced in two Spanish regions, namely Catalonia and the Valencian Community.

Because of its characteristics, in ancient times the bull represented the ultimate totemic animal. According to some anthropologists, the ritual of the “Toro Jubilo” was meant to be a sacred celebration of Iberian people already during the Bronze Age and it took place on the solstices and spring equinoxes. The bull was then sacrificed and its meat consumed by the community in a bid to strengthen their bodies. 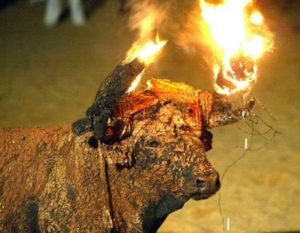 Others date the ritual back to ancient battles, when bulls of fire were used to scatter the enemy.

A more popular version sees a connection between this ritual and the arrival of the relics of the holy bodies in Medinaceli, transported by a bull with burning torches on its horns. The first records of this practice date back to the mid-16th century, while at the juncture of the 18th and 19th centuries 13 November was set as the date of the “Toro Jubilo” celebration.

Catalonia has tried to ban bullfighting however, the supreme Spanish Court refused explaining it is part of their “Cultural Heritage”. The same happened in the Balearic Islands that were blocked by high court ruling. The origin of the problem finds its roots in Spanish legislation that considers animals objects: “from a legal standpoint animals are currently considered assets just like refrigerators or a TV set”.

The bull is tied to a pole in the middle of a square. In the meantime, hot ashes are scattered around the floor of the arena. Five bonfires, one for each of the holy martyrs of Medinaceli, light up the bullring where the ritual will take place.

The torture begins: a wooden frame is forcibly attached to the bull’s head. Either sides of the wooden frame are then set on fire, giving the impression that the bull has flaming horns. 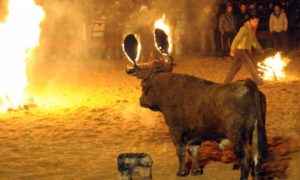 The poor creature is then released and can do nothing but run around in pain at extremely high speed with the risk to crash, in an attempt to escape the flames and avoid the bonfires. The animal would probably have been blinded because of the fire burning its cornea.

Every so often bulls hit their heads so fast that they die.

The ritual usually takes place every year around 13th November at midnight.

All this suffering is only the beginning: the following day the bull will be killed in a slaughterhouse.

What is even more astonishing is that the event represents a huge risk also for humans that are watching. A few months ago, a 71-year-old man has been charged by a bull on fire in Jerica and died, for instance. Those in charge of organizing these festivals refuse to accept the danger to humans and say it is not that painful after all for the bulls. 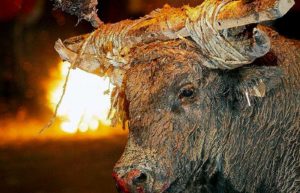 Spain… join the 21st century! This game is a sadistic form of torture that reminds us of the times when gladiators were fighting in the colosseum or even before!!