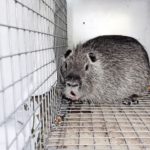 There is a growing prejudice against nutrias in Italy, viewed as public enemies by many. Let’s see why.

This native South American species was introduced to Italy in the 50s last century from fur traders. When nutrias stopped being used for fur coats and replaced in this by foxes, beavers and rabbits, they started to get killed or released in the proximity of rivers.

This had consequences, in particular in the Po Plains. Indeed, this area constitutes a sort of “El Dorado” for these semiaquatic animals, a happy oasis where they can easily reproduce and secure the food they need.

The problem is, however, that the number of nutrias increased exponentially causing a series of problems. Nutrias are extremely fertile animals; females can get pregnant even up to three times per year. Moreover, they are prey animals and in Italy, there are not that many predators such as anacondas, jaguars and pumas that run after them.

Furthermore, it is well known that nutrias dig burrows that can cause landslides especially in the area of the Po Plains, a territory composed by irrigation channels used for intensive agricultural activities.

As usual, the institutional authorities gave the green light to hunters as a primary response to the issue. However, following a lawsuit lodged by OIPA and other animal rights associations against the Municipality of Turin, the Regional Administrative Tribunal of Piedmont established that the killing of animals must be an extrema ratio, to be performed only if the Institute for Environmental Protection (ISPRA) certifies the initial ineffectiveness of alternative non-invasive ecological interventions. This judicial victory of animal welfare associations confirms our idea that massive cull plans serve no purpose. 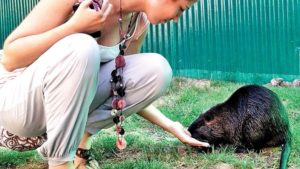 Mitzy Mauthe von Degerfeld and Giuseppe Quaranta, Professors in veterinary sciences at the CANC (Non-Conventional Animal Center) of the University of Turin have no doubts: the nutria management plan through bloodless intervention is going to be a huge success.

The project, pioneer in Europe, is realized under the auspices of the Municipality of Turin and supported by the Metropolitan City of Turin and is actually at the third implementation phase. It is not only achieving its goal, but it has also the potential to become a reference model for other cities in Italy and around Europe.

The two Professors say they were inspired to the best practices implemented in feline colonies that are well-known examples of sedentary and manageable clowders, taking due care of the several biological and behavioral differences between the two species.

Sterilization by laparoscopy provides a rapid and non-invasive method that allows nutrias to return to their home after only 120 minutes after being captured, all in perfect health.

Nutria are caught by volunteers from various animal welfare associations, coordinated by Alessandro Piacenza, national councilor of OIPA after having received a training.

The animals then undergo surgery inside a well-equipped mobile clinic and released back in the territory where they were captured.

The choice of a non-invasive method to tackle the spread of nutria colonies is a very important step forward for greater protection of animals. Furthermore, the project is fully in line with the European legislation. Indeed, regulation (EU) 1143/2014 on invasive alien species (the IAS Regulation) establishes rules on animals and plants that are introduced accidentally or deliberately into a natural environment where they are not normally found, with serious negative consequences for their new environment. Nutria are included in the list of invasive alien species of Union concern under the name “Myocastor coypus”. In particular, the regulation envisaged three types of measures to be taken across the EU in relation to invasive alien species included on the Union list, one of which related to the need of concerted management action to prevent them from spreading any further. 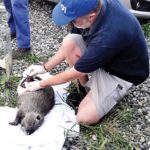 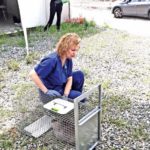 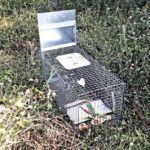