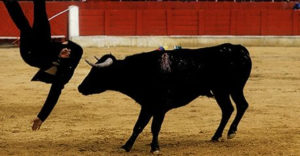 Before entering the ring the bull is handicapped, given drugs and massive doses of sulphates to induce diarrhoea, in order to obstruct his senses and get him very weak. The bull is also hit on the kidneys with sacs filled with sand, clubs and vaseline is smeared into his eyes to blur his vision, straw or cotton wool is put in his nostrils, ears and throat not to let him breathe properly, and his horns are filed uncovering the nerves, so that goring becomes very painful.

The bullfighter is never alone in the ring, he’s surrounded by banderilleros and picadores and enters only after the bull has been almost completely killed. When he gets into the arena the bull is stabbed on different sides with banderillas (hooks) and picas (nozzles), to induce haemorrhages and stunning.

When the show is over the agonising bull is dragged away, and tail, ears and testicles are cut while he’s still alive. The testicles are then shown as trophy to the screaming public.

The bull is not the only victim of the bullfight: the horses of the picadores may get blinded so that they cannot see the bull.

The harness the horses have on the sides may look like protections, but they are used to hide the slaughtered sides of the horse from the eyes of the public.

This mass massacre is traditional in Spain, Portugal, and south France and it’s funded by the government as well as by the European Union.

82% of the Spanish people is against bullfights, but they still survive thanks to the tourism.

Bullfight in Spain in one year

Killed bulls for bullfights in one year

DONATE TO OIPA AGAINST BULLFIGHT 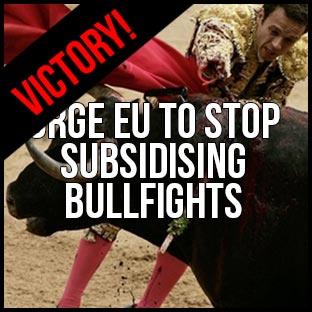