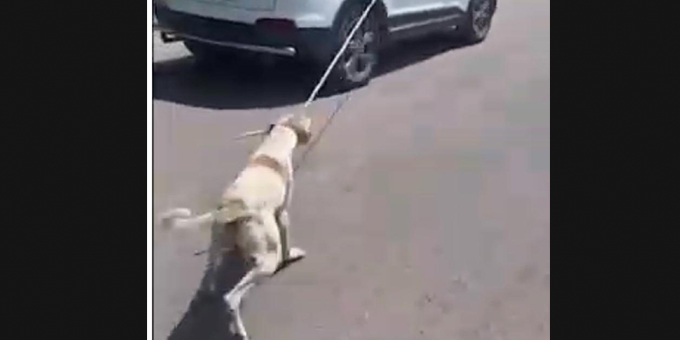 OIPA’s Member League Wing of Research in Local Development (WORLD), advocating for animals rights and animal welfare for more than two decades, together with OIPA International Representative for India – Rajasthan Mr. Manish Saxena – also Member of Animal Welfare Board of Rajasthan, Officer of Animal Welfare Board of India, Member of the Society for Prevention of Cruelty to Animals (SPCA) and Director of WORLD Organization – came across a terrible episode of animal cruelty. 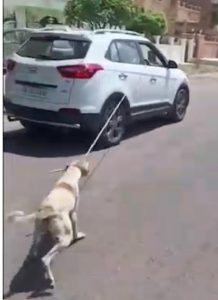 A well-known skin specialist doctor of Jodhpur District in the State of Rajasthan has tied a street dog with a rope to his car forcing the animal to run along with his speeding vehicle for 2 kilometers. The man deliberately dragged, tortured, and brutally injured the street dog, inflicting unnecessary pain and suffering to an innocent creature.

The man as a medical practitioner is bestowed the responsibility to work selflessly for relieving pain and suffering to living beings yet he subjected a voiceless to near death trauma and injuries. Dog, luckily saved, suffered from fracture and deep injuries.

This is an utmost inhumane act in clear violation of the Prevention of Cruelty to Animals Act 1960 of India. As per Indian law, street dogs cannot be beaten, killed, driven away, displaced or dislocated away from their territory. They can only be sterilized in the manner proposed in The Animal Birth Control (Dogs) Rules, 2001 enacted under the Indian Prevention of Cruelty to Animals Act 1960.

Our OIPA International Representative Mr. Manish Saxena immediately coordinated a joint action with the Local Administration and the Police Department to investigate and take stringent action against this person for violating the Prevention of Cruelty to Animals Act 1960. His prompt action resulted in medical treatment to the injured dog and the arrest and legal action against the man under Section 11 of Prevention of Cruelty to Animals Act, 1960.

The State Animal Welfare Board of Rajasthan wrote to the Principal Secretary of Chief Minister and the Medical Education Department of Rajasthan demanding stringent action and immediate suspension of the man accused of Dog cruelty case in Jodhpur, India.

OIPA India Rajasthan has further demanded local community to be more sensitive and compassionate towards streets dogs and guarantee a healthier and pacific coexistence of all species.

❤️ If you witness an episode of animal cruelty, don’t turn away! Report promptly as you might save a life ❤️