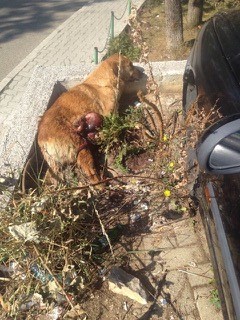 KOSOVO: AN EXAMPLE ON HOW NOT TO CONDUCT A STATE CNVR PROGRAM

The Kosovar Food and Veterinary Agency (FVA) launched a state sterilization program after the parliament’s decision to earmark 1.3 Mio Euro in the next 3 years to solve the stray dog problem in the country. The program officially started at the beginning of June of this year, after the signature of the contracts with veterinary groups in all regions of the country.

CNVR is short for Collect Neuter Vaccinate and Return that means free roaming dogs are collected, sterilised, vaccinated, labelled and taken back to the place where they were initially caught.

However, there is no strategy behind the state CNVR programme in Kosovo, which is turning out to be a failure.

Firstly, no check on the qualifications of the mandated veterinarians has been carried out beforehand.

SVSP Slovenian Vets for Stray Pets and StrayCoCo, two organizations working for the wellbeing of street dogs, organized two postgraduate seminars to raise abilities and skills on dog sterilization techniques and the proper functioning of CNVR programs. However, only 16 vets participated in the seminars and the FVA showed no interest in this initiative. Instead of considering the applications made by those vets who attended the meetings, the Agency had different selection priorities.

In fact, the tender was finally assigned mainly to large animals vets who work in big farms. These vets are not specialized in the treatment of pets, such as dogs, of course.

Some months ago, the President of the Veterinary Chamber of Kosovo, Dr. Xhevdet Krasniqi, told our representative Helen Wormser that every veterinarian should have a chance to get a “piece of the cake”, in his words.

INCOMPETENCE DURING THE “SPAY/NEUTER” PHASE OF THE PROGRAM

The above-mentioned problem- the limited knowledge and capabilities necessary for the surgical sterilization of dogs- led to an unknown but high number of injuries and deaths among the free-roaming dog population.

You can see below the results of the lack of qualification to spay/neuter dogs. 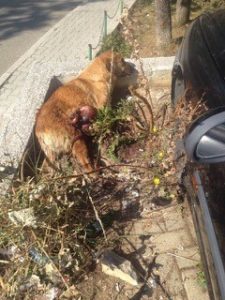 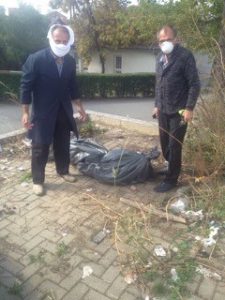 These pictures above were taken in Dragash. Look at this dog, whose belly was split open. It is probably because of shoddy suture material or the vets’ poor skills. He has no other injuries, so every claim that he had an accident are helpless excuses. Like this dog, many other dogs suffer from infections after unsterile surgeries.

INCOMPETENCE DURING THE “RELEASE” PHASE

In a CNVR program, it is crucial to return the sterilised dogs to the point of capture. When the majority of the stray animals is sterilized and returned to the same area, the population will diminish and the problem will be nipped in the bud.

The Kosovar CNVR program is showing a lack of correct “release” phase. Although it is crucial to bring the dogs back in the area where they were picked up, the veterinary groups use to dump them far away. 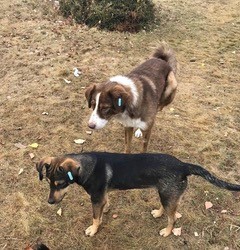 Some days ago, those dogs were released in a new place in Prishtina.  They are defending their new territory, which makes them dangerous in the eyes of many citizens. “Those dogs have a territory somewhere, but not here”, as witnesses say.

It is clear that many dogs will starve abandoned in the woods, while others will start fighting in a turf war.

CNVR is generally accepted as the most effective solution to the overpopulation of stray animals.

The state should provide opportunities to develop training programmes for veterinarians, veterinary students and veterinary nursing staff in collaboration with NGOs that focus on improving veterinary capacity. In addition, veterinarians’ curricula should include small animals (pet) medicine – and not only large animal medicine. Furthermore, a number of different stakeholders should be involved in planning and implementation, including the veterinary profession, NGOs and dog owners themselves. Only qualified veterinarians should undertake surgical sterilization. All veterinarians performing medical interventions, surgery and/or training are expected to practice confidently and competently. The highest surgical standards and protocols should be adhered to, particularly given that many dogs going through a CNVR programme may be in a compromised state of health and/or living in a compromising environment.

It was not, of course, intention of the newly elected Prime Minister Ramush Haradinaj to bring into being such a chaotic and badly performed dog population management program.

Last year he introduced the first state CNVR program to be executed by FVA, with the hope that Kosovo became a role model for the entire Balkan region in the field of humane dog population management.

This was not the case, as the program did not nearly fulfil the scientifically proven and correct standards of a CNVR work with a lasting effect and benefit for the country.

…BUT FORTUNATELY, THERE IS ALSO SOME GOOD NEWS…

THE FIRST VETERINARY CLINIC IN KOSOVO OPENS ITS DOORS IN GJAKOVA!

On 29th October 2018, the small animal clinic Gjakova opened its doors with its Sanctuary.

Located on a land of 5,000 m2, the clinic consists of boxes to separate sick and healthy dogs. The outside fenced area shall host temporary stray dogs under treatment and some steady guests, most of which handicapped dogs that still love their life.

The clinic is led by the couple DVM Blendi Bejdoni and DVM Eriola Bejdoni, both specialized on pets and both since 5 years engaged in an intense CNVR program, in the first 2 years financed by an American and since the beginning of 2015 by the Swiss StrayCoCo Foundation and its supporters. 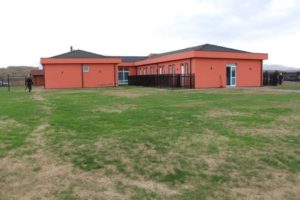 The clinic aims at:

However, the clinic still lacks many materials and instruments. Its vets cannot do any laboratory tests and do not have a microscope or other diagnostic instruments, with the exception of an old X-Ray that was thankfully donated by a Swiss Veterinarian. 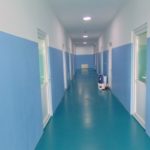 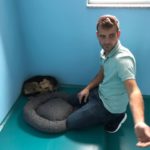 Please help this great group of vets’ diagnostic work and help them saving more and more dogs in Kosovo!

OIPA congratulates for such an important contribution to the wellbeing of dogs in Kosovo.