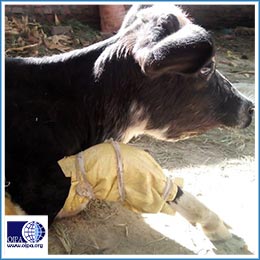 DOG INJURED BY A HUMAN STREET ATTACK IN BUDOL 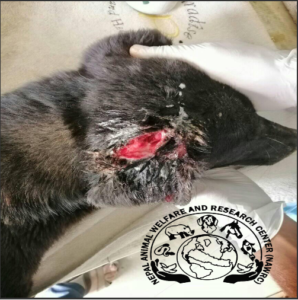 On the 20th April 2019, another extreme case put in an urgent difficult situation OIPA Nepal / Nepal Animal Welfare and Research Center (NAWRC).
Once again the victim of human cruelty is a stray dog, which was found injured by a sharped knife stab in its neck. The dog was rescued by the OIPA Nepal staff Mr Sujan Bhandari right after the attack which took place during the morning at a gas distributor warehouse in Budol, Banepa-6, Nepal. Unfortunately, the Several attempts to discover the guilt has proven to be unsuccessful. The dog injuries required a surgical treatment that was realized at the OIPA Nepal / NAWRC centre. Now, the dog wounds have been sutured and it has been provided with proper painkiller, antibiotics, and skin healing sprays. The animal is going to be kept under close supervision for the next few days and then it will be released back to his own area in the case that adoption will not be found.
This is just one of the many situations of the same kind which occur around the Budol district and that make the OIPA Nepal centre in a dire necessity for appropriate infrastructures and goods to follow efficiently its programme. 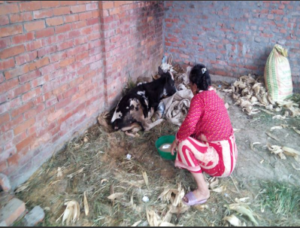 Another problem which is causing a great concert to OIPA Nepal / NAWRC is what regards the abandoned cows and calves. According to the organisation, even though these animals are venerated by the religion and the Nepalese people, the animals are often treated as commodities and later abandoned in the Nepalese streets. Culturally, the cow is the National Animal of Nepal and the Constitution of Nepal has legally protected it from any kind of harms and cruelties. Not only law but Nepalese people worship cows as considered to be the incarnation of Goddess Laxmi (Goddess of Wealth). Moreover, cows are among the five animals that are worshipped in Tihar. They are worshipped as Goddess Laxmi in the 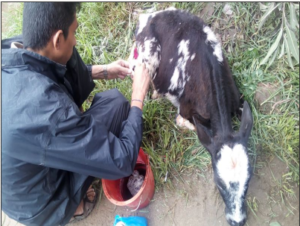 third day of Tihar, popular with their name as ‘Gai Tihar’ or ‘Laxmi Puja’. Cows are known as ‘Gai’ in Nepal. The problem of abandoning practices is due to the cow farming trends in Nepal which are subsidized by government funds. This activity has led to a commercialized large scale cow farming with the purpose of higher production in milk practising the Artificial Insemination (AI). The management of the cattle in farms involves that the calves are abandoned in the streets when they are cubs and as soon as they are able to stand on their paws. These animals suffer difficult situations especially when in the streets, because of the hunger, thrust, dog attacks, road accidents, human attacks, etc.

Dristi is a blind dog that has been abandoned in front of OIPA Nepal / NAWRC on the 11th of May. 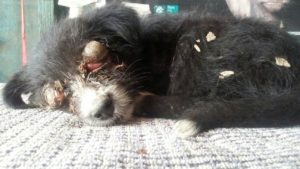 The dog urges prompt medical treatments to cure both of its damaged eyes. Due to the lack of sufficient economic resources, infrastructures, and vehicle, OIPA Nepal is searching for fundings to provide treatment to the animal. OIPA Nepal’s Plan for Dristi is to give to the dog the antibiotics and de-worming therapy; perform the surgical removal of both eyes as they are completely damaged; find good sponsors and adoption in Nepal or internationally.
OIPA Nepal is committed to establishing the ‘Animal Welfare Trust’, a shelter structured to provide 24 hours of clinical care, food, and accommodation for dogs in difficult conditions like DRISTI. 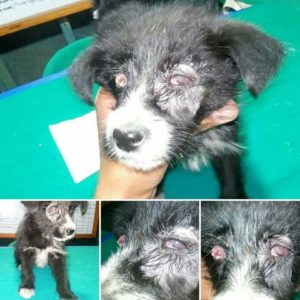 After some medical treatments, Dristi’s health conditions have got better. But it’s not enough yet! She might still develop cancerous tissues in eye balls if left like this.

OIPA NEPAL IS OVERLOADED WITH EMERGENCIES!!